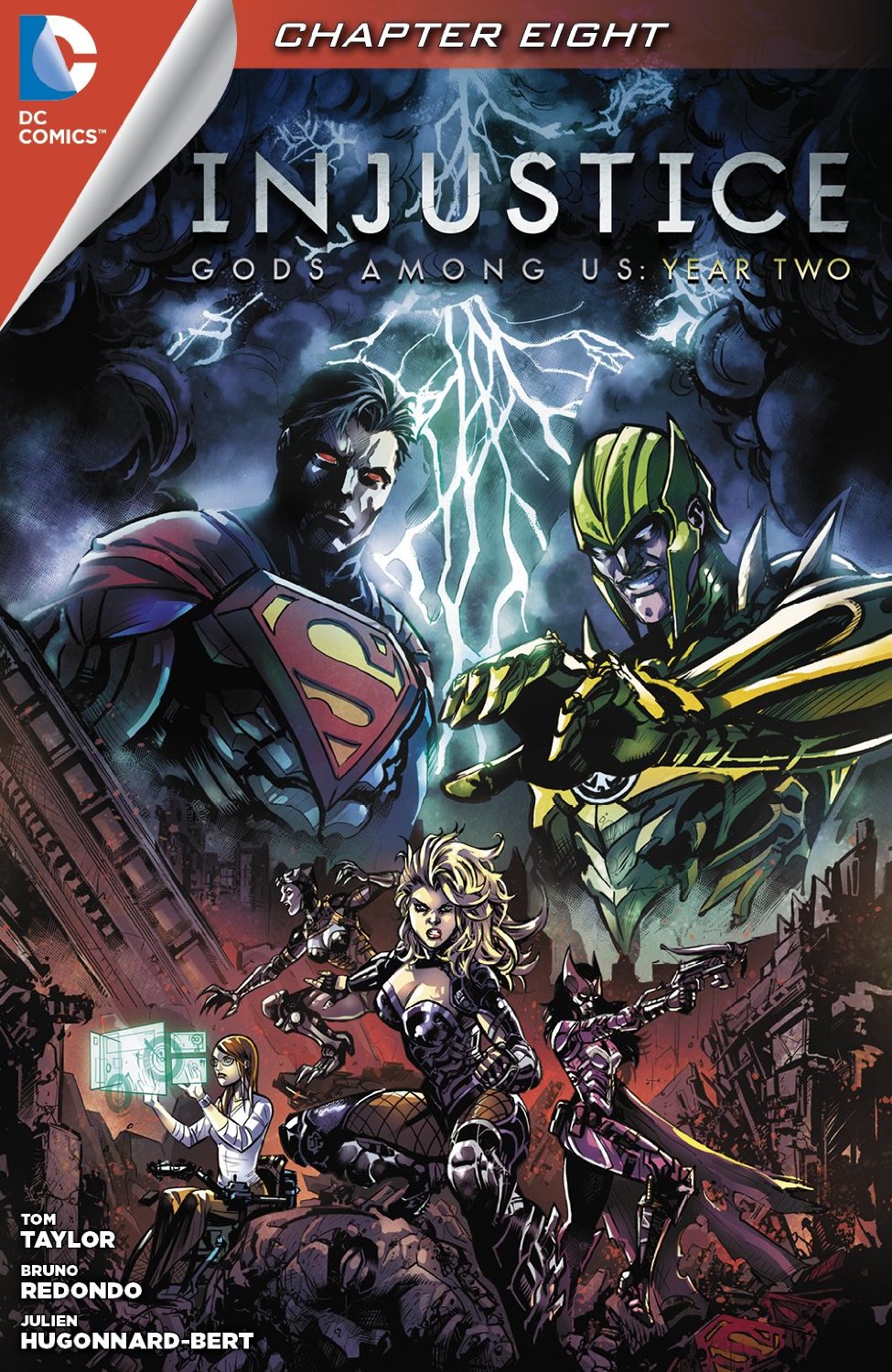 Click to enlarge
On Oa, Green Lantern defends Superman's direction with the Earth, stating that Superman has the correct idea and drive and that the world has improved because of it. However, Hal Jordan's audience with the Guardians is a formality, as the Guardians have all ready made up their minds. They will send a force to Earth and depose Superman. Hal reconnects with Killowog and John Stewart, then observes a sky filled with Green Lanterns. They've all been recalled to take on Superman. Hal is asked for his ring, but resists and seeks to escape Oa. The Guardians seal off the planet to keep him from escaping, and Jordan is restrained and knocked unconscious. While Hal is placed in a cell, the rest of the Lanterns head for Earth and combat.

Story - 3: There will come a day when Injustice hits a low and it doesn't even raise an eyebrow. Fortunately, the series still has some shock value left, even if it's only in how ridiculous the scenario is and how willingly it indulges readers worse instincts and fanboy wants. It would be a bold-face lie for this reviewer to say that the next issue is one that will be looked forward to. However, looked forward to in the manner that one looks forward to seeing a fuse burn to its inevitable end. There is no suspense, no depth, no gravitas, just BOOM. A ridiculous pattern of boom-sha-lock-lock-BOOM. That's it. The question of how many explosions can be set off before the audience becomes inured doesn't matter right now. Light the fuse, blow stuff up, then run like hell to the next explosion. That's what Injustice delivers on and with aplomb at that. Taylor knows his audience, and who knows, Injustice may just make the full term, though such a thought results in uncontrollable cringing.

The scene on Oa is just patently false. There is absolutely no reason for the Guardians to get involved with what Superman is doing, as their involvement is exactly what they accuse Superman of being in the wrong of. The Guardians could solve this themselves. Ganthet could have done it on his own, and their would have been little that Superman could have done otherwise. However, that wouldn't result in a big, stupid fight. The fact that Hal believes he can escape from the Guardians on the planet that houses their power is moronic. Still, if he doesn't try, then there can't be a big, stupid showdown between Hal and fifty Lanterns... whom he has no chance against. The dialogue between Killowog and Hal is deplorable. That two friends could sink this low that fast is beyond Parallax, it's just so dumb. Killowog becoming so angered that he wants to bust open Hal's face is equally bad, but it also seems that Hal's ring doesn't work when blood needs to be shown either. You know? The ring that heals Lanterns, provides them with environmental protection, a force field, etc.? No, we need show blood here, so the ring just doesn't work any longer, plus we need Hal unconscious so the ring can be taken away, right? Wrong. The Guardians could do that with nay of the macho buffalo chips. We want the buffalo chips, though.

The biggest problem with the story is that everyone is guilty of doing the same thing. Superman, Hal Jordan, the Guardians, Killowog, they're all the same person: a blind, arrogant autocrat who believes that he is right and no one else is. Not one individual tries to talk this down with any seriousness. We're given platitudes and pinions to allow for excuses: "Ganthet tried to talk to Regime Superman, but he wouldn't listen," and of course, the big stupid fights that will come directly after. It is as if some plague, some sort of red spore hate plague has been unleashed in this universe, but instead of making the infected succumb to hate, it just makes everyone stupid. They are stupid to their surroundings, stupid to their motivations, and stupid to their own abilities. Why? So they can have a big, stupid fight. So we can see what the greatest and grandest heroes look like when they're allowed to remain in their outfits, and have 1990s Image heroes poured in where they once would have resided. It's just stupid.

It's pretty obvious where my mind was for this issue, and it's just the fatigue that sets in with the series periodically. It's a purposely deformed look at the best heroes ever, and it's not even being done well. It only happens when shock and BOOM replace quality. It's a shame that so many are unconcerned with quality.