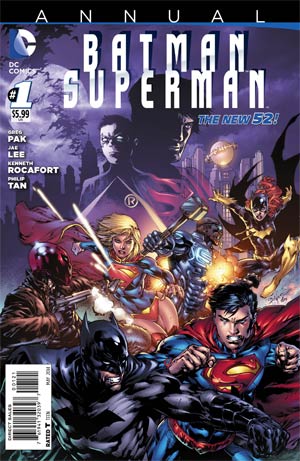 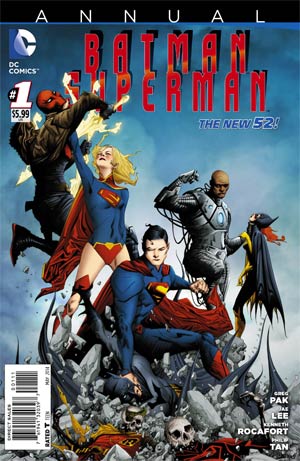 Click to enlarge
After defeating Mongul, Superman imprisons him in the Phantom Zone and he and Batman go their separate ways, until Mongul's son Jochi comes to challenge Superman and Batman in the arena asking that each of them bring two from their respective "clans". Superman chooses Supergirl and Steel while Batman chooses Red Hood, later to be joined by Batgirl and Krypto.

Once they get to Warworld, Batman and Red Hood induct Jochi into "the Batman Clan" and begin to fight in the tournament as Batgirl and Steel go undercover to disable Warworld's weapons system.

Then the Batman and Superman clans are put against each other as Batman uses Kryptonite to weaken them and level the playing field. Right as Batman refuses to kill Superman, the Judge decides to wipe out Earth, until Jochi cuts off his head and declares himself leader of Warworld. Steel and Batgirl blow up the computers and the teams retreat to Earth. Jochi stays behind because it's his home and before Warworld can crash into Earth, Superman sends it into the Phantom Zone.

In the Phantom Zone, Mongul kills his son, declaring himself the true leader of Warworld.

Story - 5: I'll be honest, I am quite surprised that I am giving this story a 5/5, because I didn't have all that high of hopes for it in the first place, but I was thoroughly entertained and engaged throughout the entire story.

I really liked how Superman and Batman immediately choose the two "sidekicks" with anger/rage issues to help them on Warworld and then also have the two techy/brainy "sidekicks" as well. I thought that was really good for this story. I would love to see more Supergirl/Red Hood team-ups, in fact, I think it'd be interesting if they were together, but I digress.

The way Pak wrote Superman and Batman, both as individuals and friends, was very well done in this issue, so I wonder why on so many other occasions he gets them all wrong? Here they were equals, here they worked together, here they beat accomplished their goal and they both grew stronger because of it. I really enjoyed each of their characters this issue.

I also liked the scene where Superman goes to Supergirl to ask her to be a part of his "clan" and then Wonder Woman shows up and Superman shuts her down. I know he had a legitimate reason for not letting her join him on Warworld, but as someone who doesn't care about the New 52 Wonder Woman at all, I thought it was hilarious.

Speaking of funny things in this issue, when Batman yells, "Beware the Batman Clan!", I just about died. I definitely appreciated the reference to Beware the Batman (an awesome animated series for you Batman fans out there), but it's just a terrible line and it made me laugh.

One thing I really enjoyed about this issue is the loss that Batman and Superman both have to deal with. Batman is worried about Batgirl and Red Hood because Batgirl was once paralyzed by the Joker and Red Hood, as Robin, was killed by him. Not to mention, Batman is still suffering from grief over the death of his most recent Robin, and son, Damian Wayne. Then we have Superman who after "Krypton Returns" doesn't know if Superboy, Kon-El, is dead or alive, though we the reader know he's dead. We see Superman regrets not spending more time with him or being there for him, to which Batman tells him that it's easier if you don't ask those questions. It's a really heart-wrenching page and I really enjoyed it.

Also, just a thought, but if Superman had just thrown Warworld into the Phantom Zone from the beginning, a lot less people would have died...

Overall, this Annual was a pleasant surprise and I would definitely recommend it to any fan of the World's Finest superheroes, though I would not necessarily recommend the Batman/Superman arc that this story spans out of as I didn't enjoy that one all that much. But this story gets two thumbs up from me!

Art (Act One & Epilogue) - 4: You know, I really enjoyed Jae Lee's artwork here. I'm a bit surprised because he's definitely not my favorite artist out there, but his style worked really well for the mood of the book, especially the beginning.

Art (Act Two) - 5: On the flip-side to Jae Lee, I really enjoy Kenneth Rocafort's art. I loved his work on Superman and Red Hood & the Outlaws, so to see him drawing both Superman and Red Hood once again made me happy. Plus, I think he draws aliens and alien like characters very well, which is extremely important when the story takes place on Warworld.

Art (Act Three) - 4: I haven't really had a lot of experience with Philip Tan's artwork, but what I saw in this issue was good, definitely entertaining. I especially love the panels where Supergirl carries Red Hood and when Superman is hovering near the Fortress.

Cover Art - 5: Once again, I am shocked by how much I love Jae Lee's artwork this week. The dead bodies of Robin and Superboy were also a nice touch. I'm sure the people on this site were happy to see Superman and his family beating on Batman and his as well. Excellent cover.

Cover Art (Variant) - 5: I really loved Ed Benes and Pete Pantazis' cover! It was fantastic. From the little battles going on on the bottom to the looming figures of Robin and Superboy up top, this cover has it all.