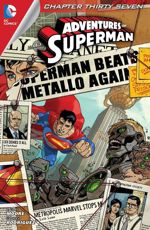 Click to enlarge
A former Daily Planet reporter is on to Clark Kent's secret.

Metallo is on a rampage. Why? No one knows. But stopping him is a job for Superman. As Superman and Metallo fight and exchange snarky remarks, Jimmy Olsen snaps a couple of action shots for the Daily Planet.

As the battle unfolds in the streets of Metropolis, a stealthy ex-Planet reporter named Carl Hobson films the Superman/Metallo fight. He's working for the Metro Star, but he's not interested in reporting on the brawl. He's got more long term plans for his recording. Carl's looking to break the story of the century. He's looking to answer the question, "Who is Superman?"

He thinks he's got it all figured out. He's a reporter after all. He's been tracking Superman for over a year, and the pieces of the puzzle are starting to come together.

Later, Carl follows Clark Kent. Clark isn't amused, and he confronts Carl. Much to Clark's surprise, Carl says that he knows the truth about Superman.

Story - 4: The Good: "Exposed" has snappy, witty, and (when appropriate) snarky dialogue. It flows nicely from scene to scene.

Also, I always love to see the Daily Planet team in action. Perry (aka "don't call me chief") White is in charge as always while Olsen is the enthusiastic bundle of energy we all love, and Lois is, as always, that competitive reporter with a heart. Clark, ever in the background, keeps a watchful, protective eye on everyone.

Superman is the hero with a brain. Yes, ladies and gentlemen, he brought lead shielding to a Metallo fight. Who'd a thought that the Big Boy Scout could do more than throw a punch? The fight between them in almost finished before it had begun.

I also liked the ending. It seems that Carl thinks he's on to Superman's secret. But is he really? Why tell Clark? I think Carl is mistaken in his assumptions about the Man of Steel's identity. However, he could also be playing Clark/Superman for a fool. I can't wait to find out in part two.

The Bad: "Exposed" is a fun story, but it is one that has been told over and over before. Hopefully, Moore has a unique twist on the old, "someone is trying to expose Superman's/Clark Kent's secret."

Art - 4: You might think it odd that I give the art a '4' when I you see I gave the cover a '2'. Both, I am presuming, are by the same artist. However, I do love the action scenes. The rest of the book has great art work, and as I state about the cover, I love the colors. Lois and Jimmy look great. Metallo's half human/half machine look is menacing.

Cover Art - 2: I'm not too impressed with the cover art. Superman's jaw line is just a little wonky for me. I don't like Superman's expression. I don't know if he is going into battle, about to cry, or is constipated. However, I do love the bright colors.