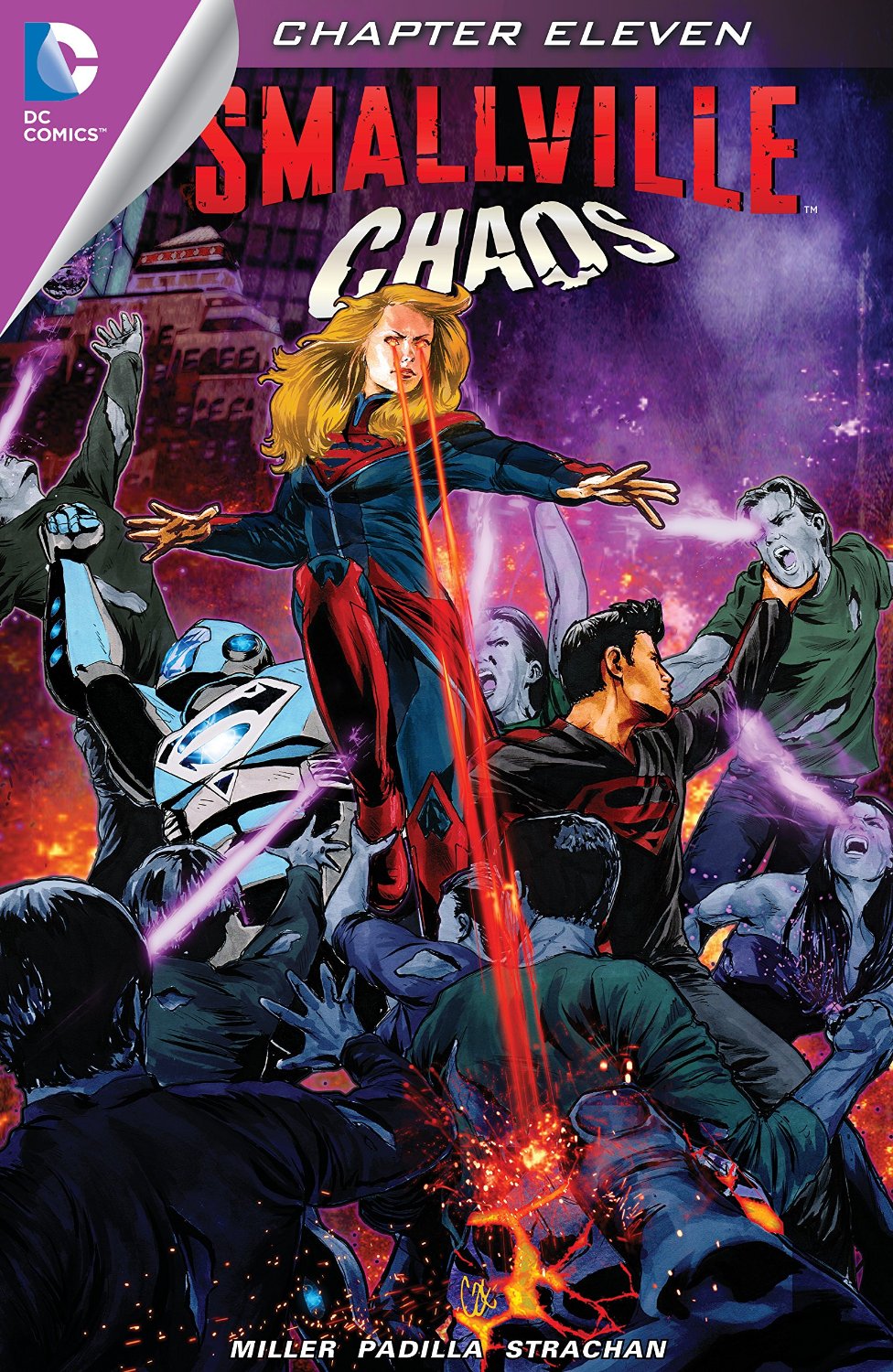 Click to enlarge
Supergirl, Superboy, and Hank Henshaw continue battling Eclipso, now in his *altogether* form after emerging from his numerous hosts throughout Metropolis. Supergirl and Superboy discover that their respective abilities aren't stopping Eclipso, and they look to Henshaw for suggestions. Henshaw says sound vibrations might just force Eclipso to condense himself even further into a single diamond, and Supergirl grabs two giant church bells and bangs them together. It works, and she tosses a bell to Superboy, who follows the same strategy. Eclipso reverts to a single diamond that Henshaw and Supergirl catch. Henshaw says there's only one way to make sure the diamond never falls into human hands again.

In Antarctica, the Yellow Lanterns prepare to execute Ted Kord, Michael Holt, and Booster Gold. Luckily, Skeets saves the day by arriving just in time and distracting the Lanterns with a set of cables that spring from its "body," so to speak. Kord, Holt, and Gold use the opportunity to incapacitate the men.

And in Bleed Space, Superman allows himself to be expelled from the Monitors' vessel into the Bleed. However, despite the rigors of Bleed Space, Superman manages to return to the ship and force his way back in. He reenters just as Lois is about to be expelled from the ship. She races for the lifeboats, but meets a group of Monitors on the way. Upon seeing her, the Monitors comment, "It would seem we underestimated the prisoners."

Lois raises her fists and responds, "You bet our ass you did."

Story - 2: I wanted to enjoyed this issue. It continues with the wild, fun ride that is "Chaos". But the part with Superman surviving the Bleed just doesn't sit well with me.

Please, allow me to explain...

Scenes like this are what so many non-Superman fans (or perhaps I should say "anti-Superman" fans) point to and say "See? He's too powerful. That's why he sucks." And in this case, they'd sort of be right. We've been told for the past few issues Superman can't survive Bleed Space anymore than Lois can. But once he's shot out of the ship, he simply doubles back and tears a hole in the ship's hull. To be fair, at least he appears to be struggling a bit, but it still negates most of what we've been told up to this point. "He can't survive Bleed Space ... He can't survive Bleed Space ... Wait! He survived." It feels cheap and lazy, from a storytelling standpoint. And while I've pointed out flaws in Miller's storytelling here and there, he's better than this.

I suppose that's what bugs me the most. Thus far, I've only had one moment of outright disdain for anything in this series (see: Lantern Part 12). Despite its ups and downs, I still consider it a consistently good book from DC. Frankly, it's the only one I look forward to reading from them. This moment just feels beneath it.

It didn't send me into a critical rage the way the space whale did (again, see: Lantern Part 12), but I couldn't help thinking, "Seriously?"

Art - 4: The artwork continues to deliver in this series. I've yet to award it a 5 because it's yet to do anything particularly earth-shattering. It doesn't stand out the way Alex Ross or Jim Lee might, but it's also exactly what the series calls for. It's energetic and always in motion. (I believe I've said this several different ways by now.) And although I didn't like the storytelling behind it, the imagery of Superman moving through Bleed Space are pretty darn cool.