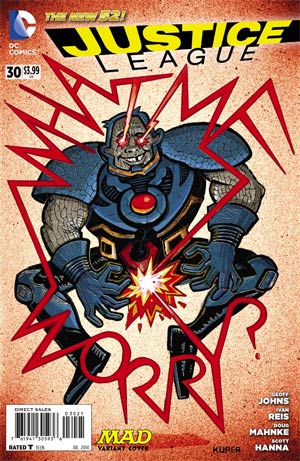 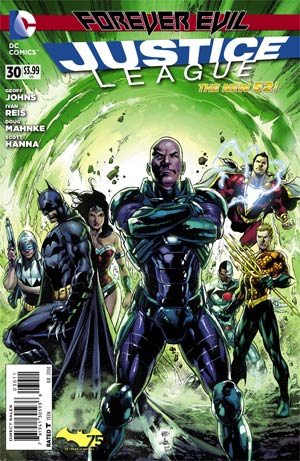 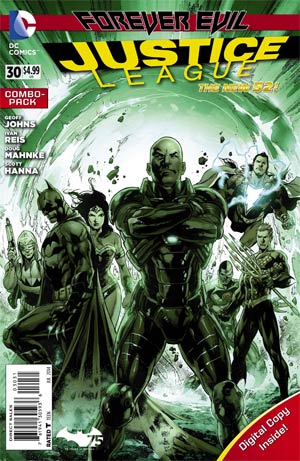 The remainder of the Secret Society gathers to plan the destruction of the Justice League in the wake of the events of Forever Evil. In the middle of their plotting, the League, led by Lex Luthor, arrive to take them down.

Four days earlier, people begin to praise Lex Luthor and even call him a hero after he helped save Earth from the Crime Syndicate. This is causing the League to be a little on edge to the point where Wonder Woman and Flash attack Metallo to find out where Lex is, as he has not been seen for days. Meanwhile in Central City, Captain Cold meets with his parole officer who tells him that Luthor has something special planned for him.

In the Bat-cave, the League meets to discuss Luthor until they receive an invitation to join him on a new Watchtower satellite that is orbiting Earth. Lex, accompanied by Shazam, explains to the League that the only way for the people to not rally against them is for him to join with them. After answering some questions under the Lasso of Truth, Lex not only reveals that his goal for joining the League is to boost his ego, but that he also fears whatever destroyed the Crime Syndicate's world, and that with the League's help they can defeat it. After that, Superman tells Lex to leave.

After, the League discusses how to defeat whatever destroyed the Syndicate's world and Cyborg reveals that if they can track down Power Ring's ring, they might have a chance. His ring, however, is waiting for Jessica Cruz, telling her that she has been chosen to annihilate Earth. That night in Gotham City, Alfred Pennyworth opens the door of Wayne Manor to see none other than Lex Luthor, asking to see Batman.

Story - 4: What a way to come back after Forever Evil!

I'll be honest, I really did enjoy the Cyborg/Metal Men centric story we got with Forever Evil, but I've missed the Justice League, like, really missed them. I'm glad they found their way back to the front and center of their own book, well, mostly anyway.

Now, I did of course read Forever Evil #7 before reading this issue (I really enjoyed the conclusion of Forever Evil by the way, especially the characterizations of Lex Luthor and Bizarro. Oh Bizarro...), so the opening of this issue wasn't too unexpected (though Lex's "in the name of the Justice League" line was a little lame), but it was still one heck of a way to kick us off on the "Injustice League" arc!

I have to admit though, and I'm sure many of my fellow Superman fans here will agree, my favorite page from this issue was the "Four Days Earlier" scene that takes place in the Daily Planet. I loved it!

At this point, I don't really have a theory as to what the Doom Patrol are up to, but in the words of Obi-Wan Kenobi, "I've got a bad feeling about this".

Wonder Woman beating the crap out of Metallo (or is it Metal-0 still?) was fun, especially since I hate the New 52 version of this character.

Now, I do want to talk about Captain Cold for a minute. Although he only got one page in this issue, there's a lot in store for this character. One thing I have always said about Captain Cold and the Rouges is that they are the most heroic villains out there. Forever Evil and the tie-in Rouges Rebellion are absolute proof of that. Heck, even The Flash book shows this over and over again! I think adding Captain Cold to the League's roster is actually a cool thing for Geoff Johns to do. Not only does it cause some interesting conflict for The Flash to struggle with, but I think it'll finally show people the side of Cold that I like to see, and in some sense I think the same is true for Lex here as well, though I do prefer my Luthors to be villainous.

The one thing I wasn't terribly fond of with this issue is that it felt like too much talking. I get that we need that after the events of last issue and Forever Evil #7, but this issue did feel a little too slow at some points. Oh, and it's about time Captain Marvel joined the Justice League!

At the end of the day, it's just going to be really interesting to see how Superman and the Flash will split from the League and how that all turns out. I'm especially interested to find out how Batman reacts to Lex knowing his dual identity as Bruce Wayne. Can't wait for next issue!

On a side note, I loved the Superman #32 preview (also written by Johns with art by one of my all-time favorite artists John Romita Jr.) shown at the end of the book. I know that this has been online for a while now and that it was at the back over every DC book this week, but it really just got me pumped up for it. Maybe a Superman/Justice League crossover is in the future?

Art - 4: These guys always deliver with the art on this book and I'm always blown away by how much I enjoy it, but seriously, please fix Batman's eyes... I can't stand the little white circles... It's too off.

Cover Art - 5: Everything I wanted and more from a Post-Forever Evil Justice League cover!