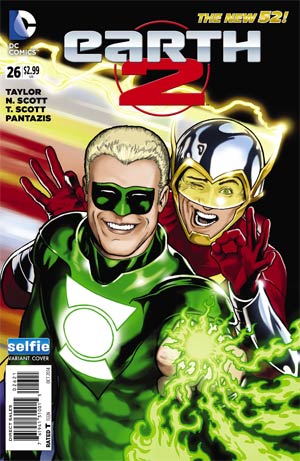 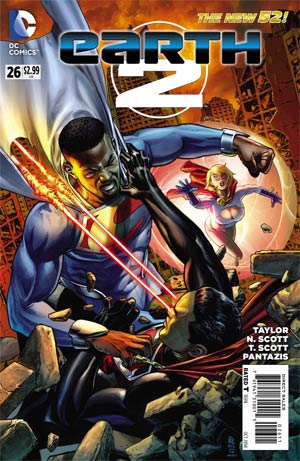 Click to enlarge
Red Tornado leaves a grieving Martha Kent to rejoin her compatriots, but not before Martha implores that she "stop Clark ...before he hurts anyone else." In Geneva, the remaining forces of Earth are amassed to destroy the gateway to Apokolips. Aquawoman believes she can handle Bedlam and spare the World Army the needs to engage Apokolips' superior forces in vain. The Batman and Commander Khan's forces proceed to make a "hole" in the Apokoliptan forces, allowing the Flash and Aquawoman to speed through to Bedlam. Aquawoman is punched through a structure, but as Bedlam tries to possess her mind, he falls to the ground, which in turn frees Terry Sloan, Mister Miracle, and Mister Terrific. They shut down the boom tube, and the Earth is no longer in danger of becoming the new Apokolips via transport. Meanwhile, a streak of power crashes and out of it comes Brutaal and Val Zod. Brutaal attempts to goad Val into fighting, but Val refuses, seeking to delay Brutaal long enough to allow the boom tube to be destroyed. Brutaal realizes this and heads to assist, but is intercepted by Red Tornado. She delays him long enough that Val is able to engage Brutaal once more. Val withstands Brutaal's attack, and to the surprise of both, Brutaal begins to calcify before their eyes. Brutaal crumbles to dust with the assistance of Red Tornado who blows his remains into a pathetic pile. The main threat has been defeated, and with all of the heroes together for the first time, Green Lantern speaks their next course of action: "Now, together, we take back our world". In an undisclosed location, Bedlam regroups with Fury and Big Barda, intent of taking back the world as well.

Story - 5: Brutaal's first appearance in Earth 2 #16, is finally resolved in Earth 2 #26. It has been a long, destructive, and nearly exhausting engagement for this reviewer, and while the story has closed somewhat, it is far from over. However, what is over, and what will remain finished, hopefully, is the story of Earth 2's Superman. What is also finished, hopefully, is the mass destruction that this planet has seen from Apokolips, The Grey, etc. It is a time for peace and rebirth, to mourn the victorious dead, and to celebrate the hard fought life that the Earth 2 wonders have secured for their people and planet once more. That being said, this installment was a curious and pleasing thing to read, though on the first go, it was perplexing in the choices that Taylor decides to make. He risks redundancy with the Apokoliptan forces being defeated once more with the destruction of a boom tube, and some serious questioning as to why the results and tactics used on Earth 2 differed so much from those used when Apokolips attacked the Earth of the Justice League. The amount of time and resources aimed at this world is very curious, seeing as how Apokolips was repulsed from both, but saw Earth 2 as a viable option for invasion a second time regardless.

Apokolips' 2nd invasion of Earth 2 is akin to attacking Russia in winter twice, and by the same army. The first invasion was a five year slog that ended in defeat, and this one has also ended in being vanquished. Steppenwolfe was killed by Brutaal, which was a counterproductive move at best; he could have been allowed to live until the Earth was completely under wraps, and Brutaal being revealed displays the notion that Darkseid didn't not just want the defeat of the wonder, no, he wanted the complete breaking of the spiritus mundi, minus the use of the Anti-Life equation. What was so important about the Earth 2 world that it was deemed worthy or weak enough for a repeat? It is doubtful that we will ever know, as there have been a slew of unanswered questions from the beginning of Earth 2, during James Robinson's run. Why did Batman need to upload the virus? How could SteppenWolfe have gotten the better of Wonder Woman? Where was The Green or The Grey for that matter when it was all occurring? Why didn't they select champions then, as it was and is still their world? Is Superman really dead or was he just teleported somewhere? A slew of questions indeed, but perhaps in the case of Superman we have an answer, or at least a reason to no longer pursue one.

The Justice Society has been formed in fire (mind you, I'm applying the name as they haven't applied one as yet)and the last image of the issue is a reassuring one. This a new team, one that will have an unshakable bond due to the events that bring them together, with smiles and grimaces and despondent faces where they should be. Bedlam still plots, but is there any doubt that this team will be up to the challenge that he may present? The team has the Batman and a budding Superman, is it a stretch to see Barda and Fury coming on board as well? Most of the questions stem from and will be answered in World's End, a weekly series that will bring new adventures and situations to this team, ones that may make their victory here short-lived, though no less deserved. There may be love between Batman and Aquawoman, or maybe Flash and Hawkgirl. Val-Zod may become the greatest hero that Earth 2 has ever known. Red Tornado may make readers question what it actually means to have a soul. These all things to look forward to, but as these reviews began because of Brutaal, and what was initially seen a bastardization of Superman, it is only fair that this review addresses that in full, beginning with a question: What does it mean to be Superman?

The importance of Superman, at least to Earth 2, was shown in his return as a morally ill-formed monster, in colors opposite his original, that matched the dark acts he would commit in the name of nothing less than pure evil. He was the perfect weapon, worse than any bomb or beam, as he could hot where no weapon can ever target, the will, the human spirit. Superman is a personification of that spirit, and it is probably the only that could ever truly subjugate the human race, hope transformed into a thing unto unshakable despair. However, this reviewer and others of the same ilk who rushed to judgement forgot some fundamental things, one of which is that there is all ways hope. Another, and much more obvious one is, if he's acting like a villain, he's not Superman. Superman is might for right, absolute power that cannot absolutely cannot be corrupted. What Taylor has done is to remind the reader, and this reviewer, of what that means by thrusting a bizarre reflection of the Man of Tomorrow upon us, or as Red Tornado says: "...A sick perversion Clark could never be turned into." It's fitting that Superman's strongest connection to humanity, even in this form, reminds us of his character and what it means to be him

It's been nearly a year since Brutaal made his appearance in costume, and I'm glad to see him go. "The world is too dark and ugly with him in it," and after such darkness, it will be a welcome return to the light. Hopefully we will not need such a reminder again in the near future, and this sojourn was more than I will ever need. It would be good if Kal-El, as much as I don't want to believe that he's dead, is allowed to rest in Earth 2, and doesn't show up in the future to see the evil done in his image. He's earned that much through his sacrifice, and we've earned the right to see Superman, in the form of Val-Zod, inherit the legacy of the World's Greatest Hero. I really thought I had this story pegged, but that wasn't the case, and it was an injustice to both character and creator. Hats off to both; it was a rewarding experience.

Art - 5: It's Scott's last issue and she will be missed... Whomever takes over has big shoes to fill.

Cover Art - 4: Good, but why doe Val look like Hancock?