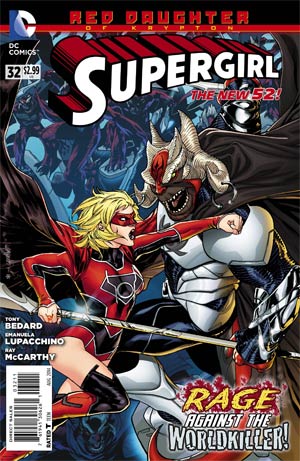 Click to enlarge
Kara Zor-El, at Guy Gardner's request, (See Red Lanterns #32) is heading for Mogo to find the being who can remove her Red Lantern ring without killing her. She changes course for Earth, where she confronts the Diasporans and their leader, who is actually Krypton's fifth Worldkiller. With the aid of her power ring, the Worldkiller's body dies, but is, in fact, the armor that is the threat as tendrils exit from it grabbing the Maid of Might. Both the creature and Supergirl enter Earth's Kryptonite contaminated atmosphere, (See recent Action Comics issues). The Worldkiller's objective is to possess Kara's body to have both her Kryptonian and Red Lantern abilities to destroy the Earth.

Story - 4: The story itself merits a five, but two things really lower its rating. First, let's discuss the footnotes for other books, I normally don't mind them, but this time they hinder a normally exciting comic. I haven't read any of the comics mentioned, which is understandable for Red Lanterns because as of this writing, it's not in stores yet. It feels Tony Bedard was forced to make Supergirl sidestep into the other Superman titles at the last moment. This causes Kara's title to feel a bit less reader friendly this month.

Now, let's move onto the second problem with Supergirl #32. Kara is full of rage. I get that. There's nothing wrong with that. However, she is blundering into situations while failing to learn from her mistakes. Hopefully, as Bedard's run progresses, she'll mature a little. For me, her "I didn't want to do this or that" attitude bogs down what is an otherwise entertaining tale.

Art - 5: Emanuela Lupacchino's style has improved. Perhaps it's because she's the only one who drew this issue. Her previous efforts, while good, felt overshadowed by the others who worked with her.

Cover Art - 5: This cover in one that really sums up what goes on in the book. It makes one want to buy it, open it and read it.