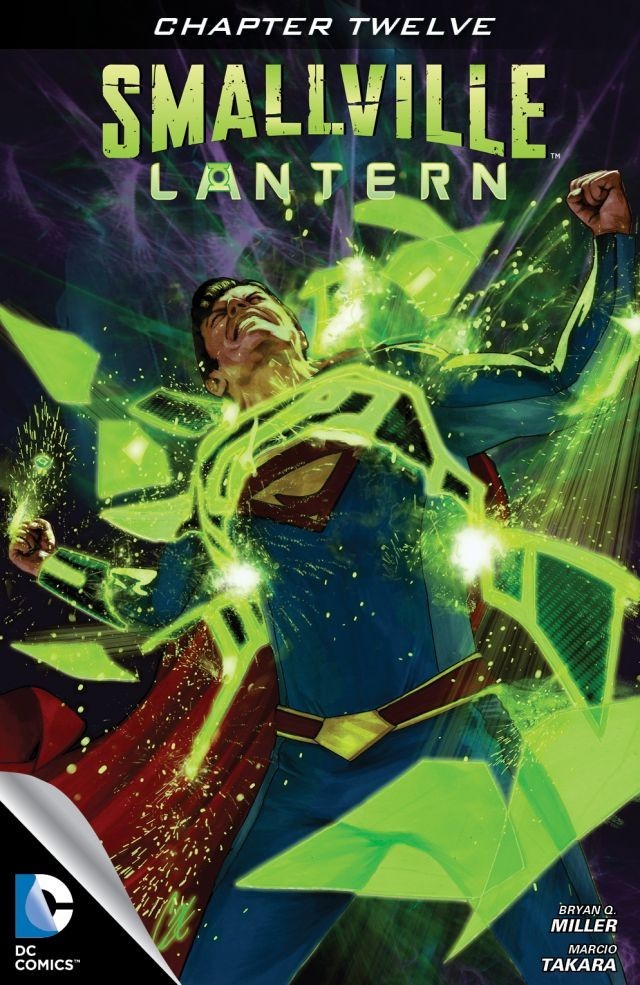 Click to enlarge
Superman rescues the escaped Arkham Asylum villains while John Stewart distracts Parallax, who insists earth has enough fear to feed him forever. Stewart lures the cosmic entity into a junkyard and smashes the left side of its head/face with a wrecking ball. Parallax is about to counterattack when a space whale (...yeah) appears and, with an assist from Superman, banishes the entity to its home - the one thing it feared.

In the aftermath, the remaining Green Lanterns reevaluate their mission parameters. The Corps will endure, Stewart tells Clark later on, but no one will be conscripted against their will again. Clark reunites with Lois to help cover the latest breaking story: Green Arrow's return to crime-fighting.

Lex Luthor and Otis Berg, however, aren't so lucky. Lex returns home without any Lantern-related info from the Justice Society mansion. He tells Otis he needs the individuals who wore Yellow Lantern rings, who are currently in prison, to be a part of a team he wants to create.

Our heroes get the upper hand, then a giant space whale appears and makes the bad guy vanish. And it happens in roughly five pages. (Granted, action is a bit truncated in digital comics, but still.)

I've admitted before I'm not very knowledgeable of Green Lantern characters. (The only non-human I know is Mogo.) So maybe this space whale is a regular for the GL faithful. But if this guy made any appearances in THIS story before now, it can't have been very prominently. I remember the chipmunk showing up in a panel or two, but not this guy.

Or it would. Had it not been for this issue.

I'm reminded of the much-derided World of New Krypton saga not long ago. To hear people tell it today, it was the stupidest, worst conceived storyline ever created in the history of Superman comics. But go back and read the reviews of the time (seriously, they're still archived here), and many praised it as one of the best things they were reading. That all changed around the time they concluded it with War of the Supermen, the worst finale in the history of ever.

I criticized the wonkiness of the Green Lantern continuity synching up with Smallville's, because... well... it didn't. But apart from that little hiccup, this was a darn good story. The best I've had the pleasure of reviewing. (Granted, I've only reviewed three so far.) And that's what makes this finale so disappointing. Ten mostly good issues (there was a bad apple or two) are forever foreshadowed by an extremely lackluster ending.

Even the epilogues were dull. Oliver returns from fighting Prometheus (remember him?) to Chloe, and... wait for it... she's happy to see him. Did we need more than one or two panels for that? And Lex returns from the Justice Society Mansion with... you'll never guess... nothing. Not even a hint at explanation as to what Alan Scott's association is to the Green Lantern Corps. Seriously, a simple "He's not one" would've at least been something. I could even settle for, "I'm still working on it." But no.

I think I'm one of the more forgiving reviewers around here. I like intelligent, thought-provoking stories, and I also unapologetically like big, dumb popcorn fests. This was neither. This was... something else.

Art - 4: I know I ragged on him showing up out of nowhere, but that space whale looked amazing.