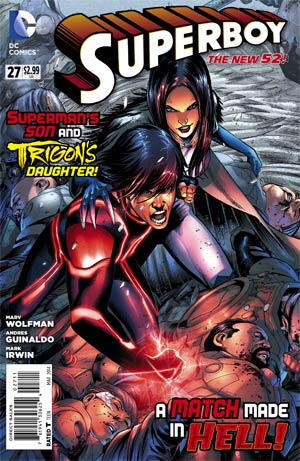 Click to enlarge
While Kid Flash faces trial, Superboy soars through the city of the future in the late 30th century. A voice rages inside Jon's head and he can't shut off the constant pestering. It refuses to allow him peace until he does what it demands. We then see Superboy free a meta named Schiz, trapped in a stasis tube. As Superboy crashes into the street he finds the voice is able to manipulate civilians and colony marshals and they attack on Schiz's behalf, who has since turned on her rescuer.

Manipulating a street carnival Schiz draws them into the mix for 'murdertainment'. The attacks increase on the Teen of Steel until he lashes back with TTK and he stands alone with Schiz. When he tries to reason with her she tells him that he turned on his own kind. When Superboy was created he was the first, the prototype, but Superboy turned on his own kind in the present day and his actions condemned 111 metahuman children to a 'living death'. Using her psionic power Schiz forces Superboy to force a gun barrel down his throat but in the nick of time Raven materializes and whisks Jon away.

Away from Schiz they reappear in the Scarlet Mountains on the far side of the planet. Raven tells him she knows he is Jon Kent, not Kon El and he lashes out threatening to kill her in a 'fatal accident' so she doesn't reveal his plot to kill the Titans. Superboy's angry attacks don't affect magic based Raven and she points out that if he wants to continue with his deception, controlling his anger it vital. A tired Superboy regains composure as Raven reveals that she won't allow him to harm the Titans while she needs them, as the two of them share a common goal - one that can only be completed once Superboy overcomes his feelings of hatred.

Superboy flies back from the mountains and Raven gives him one last piece of advice - conclude his business with Schiz to discover the answers he needs. His mind wanders back to when he followed the voice's advice and freed Schiz from a laboratory. Schiz can read minds and absorb emotions but her powers overwhelmed her and she developed schizophrenia. He remembers the lab contents - five patients in tubes, one dead and one... Schiz. Upon being freed she created a telepathic bond to Jon but trying to escape her Superboy raced away. Schiz, now connected, followed Superboy and began bombarding his mind with messages.

In the present Schiz is tracking Superboy, while in turn he is chasing Raven hoping to stop her revealing to the Titans that Kon El is dead. The three race to Echo Hospital where the Titans are hiding out and where Schiz was hidden in a stasis tube. Losing track of Raven Superboy is drawn to the lab but is blindsided by Schiz who is blocking his 'TK sense'. Superboy is ready this time - his TK is directly linked to his emotions but his Kryptonian powers are linked to his biology and he threatens to use his strength and speed to kill her. Schiz is frightened and warns him if he kills he'll violate his own oath.

Schiz reveals she wasn't BORN a meta, she was genetically altered to be one. She repeats that because of his birth all other meta's came to be - Superboy IS a meta. She points out that in the present there are thousands of meta humans but as only one man he can't kill them all. She then makes a startling offer, she will forge an army of meta survivors from this time to aid in his fight. Here they were hunted, captured, experimented on and spent years trapped in stasis because of their meta origins - because Superboy is sensible and intelligent and Schiz is affected by emotions around her she is too and her offer to help Superboy is a genuine one.

Watching from afar via her magic, Raven smiles, she was the voice that was goading Jon before (last issue) and she manipulated him into freeing Schiz and lead to these events being put in motion. Now a meta war looms and Raven smiles seeking praise from her father Trigon...

Story - 4: A tad confusing with the story lacking a few narration boxes, though perhaps deliberate considering the themes of schizophrenia. The motivation of Schiz and Superboy's mission of self hatred threw me a little and the offer of an army still seems a bit out of the blue. I'll run with it as it's still enjoyable to follow this new direction. I am not entirely sure how this is all going on while Kid Flash is on trial. Continuity is a mess right now, perhaps that's the reason why Teen Titans is getting the chop.

I have to say I really hope the 'manipulating' Superboy stories go away for many years after this as that's something that has become a bit of a comedy gag with this book. I am disappointed that we didn't get more exploration of Jon Kent rather than Schiz but I am still hooked so far.

Note to the Editor - TTK stands for Tactile TeleKinesis and TK for TeleKinesis NOT Spider Sense.

Art - 3: The art is a bit of a struggle to review - in places it looks fantastic and in others it looks rushed. If consistent it would be amazing - I can only guess time constraints led to the pages that were sparse with detail. A suggestion to the letterer would be to make Schiz and Raven have different color psionic messages because it made the flow of art very confusing to follow in places.

Cover Art - 4: It is a nice cover hinting at Raven's manipulations even though cover text hints they are a coupling. I just hope we get a Superboy cover soon with him being heroic not 'enraged' all the time.