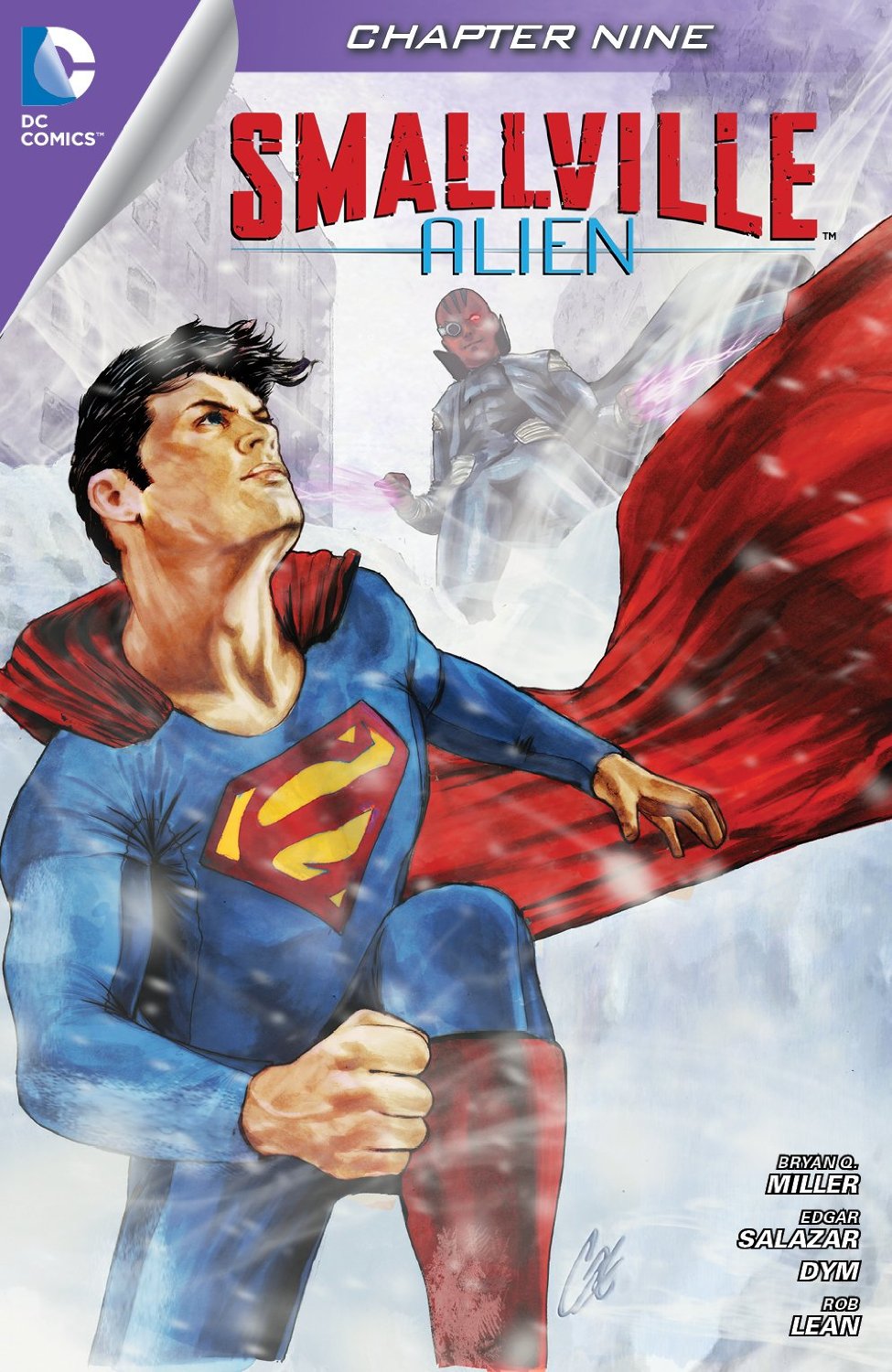 Click to enlarge
Our story opens with Batman examining the dead Clark's body alongside Commissioner Gordon. DNA samples from the killer reveal something he says he'd rather not share.

He contacts Barbara (Nightwing), Chloe and Lois at the Batcave and tells them he's "going dark." Without a word, Barbara races out of the cave on a motorcycle and meets Batman at an abandoned park called Amusement Mile. After a brief argument, Batman says he's not the hunter right now, he's the hunted. And so is Barbara. The other Clark's killer reveals himself at last by tossing some small explosives, incapacitating Batman momentarily, and stepping out of the smoke. It's another Batman - with the Joker's makeup.

Meanwhile, beneath Chernobyl, the Monitor continues stalking Lex and Clark through his ship while revealing bits and pieces of his plan. He's been destroying alternate earths one by one, and in a specific order. That order wasn't followed to the letter by one of his fellow Monitors, which is why he ended up on this earth, along with possibly a few other alternate earth inhabitants.

Lex and Clark manage to escape the ship, which fires its thrusters in preparation to take off. Clark takes advantage and flies himself and Lex out, timing his movements to make it look like they were thrown out by the blast. They land on a bridge, and the Monitor - either standing on his ship or the bridge, it's hard to tell - fires at Clark and sends him flying through the air and into a frozen lake. Lex dives in after him.

I figured we'd see some other doppelgängers make appearances, I just didn't think one of them would be a Batman-Joker hybrid. That was an interesting twist, hardly earth-shattering (get it?) but interesting nonetheless.

I wrestled over the score a bit on this one. On the one hand, it's still as entertaining as previous installments. On the other, I'm starting to get a little frustrated waiting to find out just why the Monitors do what they do.

(Marc Pritchard has every right to post something about irony on this one.)

The Monitor chasing Lex and Clark has given us a taste of his mission. He and others like him watch universes from afar and then, when those universes outlive their usefulness, the Monitors destroy them. Frankly, though, I'd pieced that much together for myself around the first issue. What I'd like to know is why. Why are these Monitors watching things in the first place? And what makes a universe "useful" to them? And what in the crap does a Batman-Joker hybrid have to do with any of it?

Overall, I still like this story. I'm just ready for some worthwhile information about the Big Bad.

Art - 4: Great art, once again. And this time, I don't have any character designs to rag on. No street gangs who look like they've watched The Warriors about eight times too many. Just straightforward designs.

I've said this before, but I really like Salazar's costume designs for everyone. Smallville has afforded DC's artists to offer their own take on the characters' appearances, and for the most part, they're my favorites. No need for another anti-New 52 rant.

I do have to point out the awkward part at the end where the Monitor blasts Clark as his ship takes off. Where was he standing? The ship? The bridge? It's just hard to tell. Perhaps someone can help me on this one?

(Or at least tell me I'm not the only one confused?)