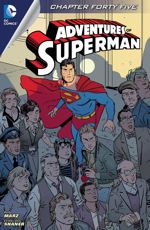 Click to enlarge
In Adventures of Superman - Chapter #44, Superman, Lois Lane, Jor-El's giant AI* creation, and all of Metropolis looked to the skies as the hostile aliens called the Vendai were approaching Earth.

Thal, the Vendai commander learns that their Kryptonian scout is no longer under their control. But it does not matter. Thal considers Earth to be a 'backwater' planet, and thus must be destroyed.

If Earth is so insignificant, why bother? But the bad guy has to be the bad guy, so...

Superman zooms off to make contact with the Vendai. When he is met with hostile firepower, Superman commences to defend the Earth. Soon, his new 'brother' joins him. Together they defeat the Vendai. However, as the Vendai run away, tail between their legs, they detonate the self-destruct mechanism they had placed in AI.

Later, Clark Kent delivers the Daily Planet newspaper to the re-united brother's he had mentioned to Lois in part one of this tale. The brothers are obviously enjoying their new found friendship. They thank Clark for delivering the paper, and as Clark walks away, they ask him if he has any siblings.

The ending page shows us the Fortress of Solitude. Here, Superman has placed his fallen brother next to the statues of his parents.

*The story does not give the robot a name. So, I have just refered to him as AI (Artificial Intelligence).

Story - 4: The Good: I was actually emotionally drained at the end of this saga. Marz makes us care about AI. I was pretty sure he was going to die. But as the story progressed, I kind of forgot that. He and Superman had good chemistry. They cared about each other as Kryptonians and as intelligent beings. I was sad to see AI go. And I thought is was very sweet to see Kal-El place AI in the Fortress. Maybe one day, there can be a way to revive AI.

The Bad: I know that part of Kal-El's lore is that he is the 'lone' survivor of Krypton. But come on, he can't have one friend from Krypton? Just one? Sob. I'm so sad right now.

Art - 4: I love the fight scenes against the Vendai. The page where AI and Superman have each other's back is just... awesome. I like this art. It is simple, but it is enough to tell the story. Not too much and not too little.

Cover Art - 3: I love the fact that Superman is in color and everyone else around him is in black and white. The shadow of the Kryptonian monster/robot covers the crowd that is gazing up at it. Brilliant.