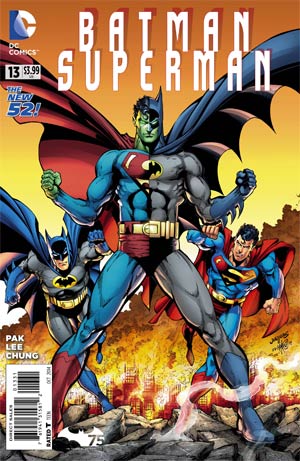 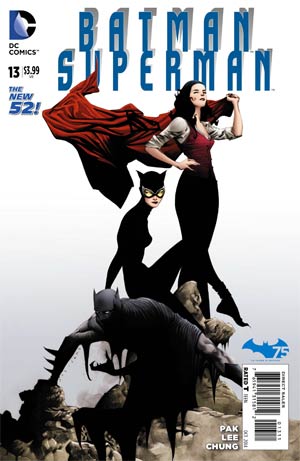 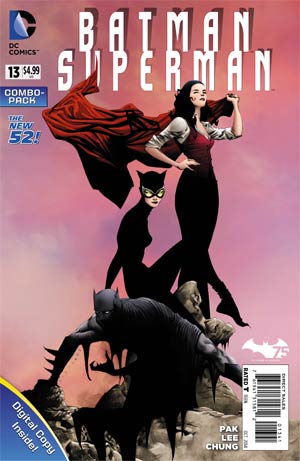 What trouble she can cause...

In DC's 'Days of Future Past' and 'Back to the Future' cross over...

It's Batman/Superman #13! And the bromance lives on.

Or not? It's interesting that Bruce and Clark don't have a single scene together throughout this entire issue.

But then again, why would they? Seems on returning Bruce and Clark back to Earth One (to their past, no less) our naughty imp has taken away The World's Finest's memories. They don't know who they are. And they don't know about each other.

Is this a plot device? Is there some sort of underlying meaning to one being clothed and the other... not?

Who cares!! Superman is naked. This girl ain't complaining.

Hilarity ensues as Clark tries to figure out why in the world he is naked in a junk yard. Catwoman is there to add the appropriate one liners and to be the damsel in distress. Finding a red 'cape' from somewhere, Clark is able to cover his jewels and save Catwoman from the robots that are controlled by that villain Mangubat. Instinct takes over, and Clark finds that he can leap... well... far. Oh, and nothing can hurt him.

How cool is that?

Meanwhile, in another part of Gotham, a man in a bat outfit asks the question, "Who am I, and why the hell am I dress up like a bat?" Well, I'm paraphrasing, but heck, that's what I always ask when I see Batman. Just... why? A Bat suit? (No offense to the Batman fans out there.)

As with Clark, Bruce's instincts and ninja training kick into auto-pilot as trouble arrives. Then, ever the detective, Bruce seeks out his identity. He investigates and follows the clues all the way back to the Bat Cave. Here, he not only finds that he is a cool dude with a cool car... but he is rich too.

Today, with no heavy memories to weigh him down, it's good to be Bruce Wayne.

In another part of Gotham, Lois Lane is doing a phone interview with this Manubat. Manubat is obviously stalling and avoiding Lois' hard-hitting questions. But Lois wants answers. Seems Manubat escaped prison and, in the process, killed several guards. He claims he is innocent, but Lois isn't impressed.

Again, Manubat's robots attack. Manubat wants Lois Lane as hostage so Superman won't kill him. But as Clark saves Lois, he asks the question, "Who is Superman?"

Story - 4: The Good: I liked the way the story flowed from Clark's predicament to Bruce's to Lois'. I especially liked the fact that Pak keeps the memory-lacking Clark and Bruce in character. Despite their memory loss they don't veer off into people we would not recognize. However, Bruce seems a little less brooding. This is an appropriate adjustment to his character since he no longer has the memory of the violent death of his parents.

Oh, and naked Superman for the win.

An almost naked superman flying off with Catwoman.

Bruce Wayne's reaction when he sees the Batmobile for the 'first time.'

Did I mention naked Superman?

The Bad: We haven't seen Manubat since Batman/Superman #1. So, his arrival is a bit startling. By the way, how do you pronounce that name? Where is the emphasis? Is it MAN-u-bat? Is it Man-U-bat? Ma-NU-bat? No matter how I try to pronounce this, it sounds wrong. Help!

Since Lois and Catwoman were on the cover, I was hoping to see them work together. Hopefully we will get that in the next few issues.

Art - 3: Lee's gothic style isn't to my liking. The lines are a little too blunt and the sometimes sketchy style of his work makes the art seem unfinished. And the facial expressions are not fully formed. For instance, on page four Catwoman comments on Superman's blush. Well...? Where's the blush? Certainly, it was not on that page. Clark is hunched over covering his... um... privates. So, obviously he is embarrassed. But his face does not fully express his embarrassment.

On the flip side, Lee's art is good at conveying the chaos of battle. In the fight between Batman and Scarecrow the artwork makes us feel off-kilter and foggy. The viewer can get an idea of what the gladiators see and feel as they do battle.

All in all, a good issue. Can't wait to see more.

Cover Art - 5: Again, though I don't usually appreciate Lee's gothic style, I do love THIS particular cover. The art is clean and neat. And I love that Catwoman and Lois Lane are on the cover. Their expressions and poses exemplify their personalities.