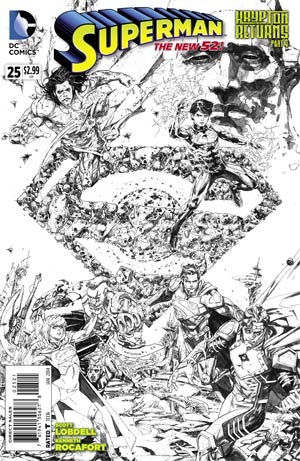 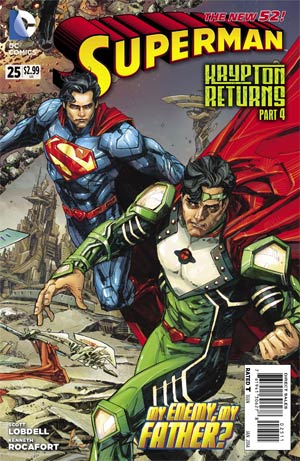 Click to enlarge
Superboy is at Krypton's end with a young Kara Zor-El. Superman is months back with an alternate version of his father Jor-El. Supergirl is leading a group of people she previously despised, a clone army all battling in some way to stop H'El's evil plan.

Superboy stands over an injured H'El. The villain has been able to be in all three times simultaneously but in Kara's time he has suffered a severe chest wound. As the wound manifests itself in Kon's time period he screams and fades from existence. Superboy is uncomfortable with hiding the truth of his visit from young Kara but to complete his mission he has to set the timeline right.

Twelve months back and Jor introduces himself to his son but hastens that they haven't time to rejoice in a reunion. Kal presses his father who relents to reveal he is from a Krypton that never died. For his 'false predictions' he became the Doomsday Man where he was exiled to Krypton's moon, he would have died there if not for the manifestation of a Time Tsunami. H'El arrived and assured them the time storm would settle and that they would all be safer confined to the planet. Suspicion grew in the Doomsday Man and he ran tests on a skin sample which then led Jor to discover the truth.

The Core Research Center was once Jor's base of operations until the Eradicator Cult blew it up, despite it being a disused wreck it was still the only direct passage to the core and so Jor and Kal set about traveling into the planet.

Superboy meanwhile after defeating the Eradicator had unwittingly discovered Zor-El's antigravity experiment. Setting things in motion he uses his new found level of powers which he discovered after a fight with Jon (the real son of Clark & Lois) to set things in motion. He forces Kara to lose consciousness and wipes her memories of him so that the previous meeting they had in the present would play out. The next thing is to ensure that this poorly powered antigravity experiment gets the boost it needs to separate from the planet.

In the past Kara has H'El beaten and bloody staring at the blade of her trident. As the blades press into his flesh, H'El delivers vitriol in his words to his former lover. Kara can't quite bring herself to kill him, though she struggles on the brink. H'El, disgusted that he ever loved her 'lie' pulls the blade into himself erasing him from this time period. A saddened Kara stands with the clone leader looking over the wrought devastation.

Back with Superman and Jor-El as they are traveling deep into the core. Superman wants to save the planet but Jor is not as optimistic. He points out that Krypton wasn't murdered, it died its natural death. From every dying planet an Eradicator is born from it to ensure its parent planet dies its death with no interference. Superboy may have killed Krypton's Eradicator but Krypton will still die.

Interrupting them H'El begins to manifest from temporal energy. Jor has pre-calculated this, as a nexus of time across all timelines, this is the one place across time where H'El could ensure his evil plan. Jor is well prepared and a plan thirty years in his making takes shape as he captures H'El in a containment bubble. Trapped inside Jor begins deconstructing H'El's DNA on a molecular level. In horror Superman destroys Jor's remote and frees H'El swearing to find another way. The containment bubble shrapnel flies outwards as a living corpse swears revenge. Superman looks at his father to see a large piece of shrapnel has pierced his containment suit inflicting a fatal wound.

H'El swears to complete his plan despite Superman's warning of temporal destruction. Superman thinks up a quick plan and begins to pummel the corpse of H'El repeatedly so the villain can't regain his composure. By doing so he is trapping H'El in this time, at this moment so he can't create a new alternate timeline and start this mess all over again.

Superboy meanwhile visits Kara's mother and tells her to find her daughter (Supergirl #0) and then returning to the outskirts of Argo he musters up all of his power.

He realizes he and H'El are both similar. They were both 'created' and then 'lied to,' Kon was once told he was a living weapon, but it is only now he realizes that despite everyone's plotting and interference he always had a choice. He uses the last of his powers as the planet crumbles to tear Argo off the planet inside a TTK enforced bubble and hurl it into space. He watches as Kara's rocket also launched from the city before being killed as Krypton explodes.

H'El begins to unravel into temporal energy with each of Superman's punches and each of these strands of time energy trap him into a temporal loop. Without his concentration to manipulate the energy H'El is trapped in flux. With H'El trapped reliving this exact moment Krypton's chain reaction can't happen. Ensuring Krypton will live beyond this moment, maybe even live beyond its original destruction. Superman uses his arctic breath to create a loop of freezing and thawing so H'El would stay imprisoned.

At that moment Oracle opens a portal and Supergirl peers through to rescue her cousin. They return to the present to find Krypton still perished according to the timeline but they stopped the Time Tsunami which was their original mission. Realizing that Kon was missing they ask Oracle who appears saddened and offers a portal home to Earth.

Superman tells Kara they will honor Superboy's sacrifice. He made it possible for their plan to succeed and stop genocide across time and space. As they disappear they don't see Krypton suddenly reappear in the present in a flash of temporal energy and then disappear once more...

Story - 3: Just like the last H'El arc, the promise was there for something amazing and some of the beats throughout have been brilliant but as before the whimper with which they end was a disappointment. I do like Kon's end, though I think that would have been even harder hitting if the entire chapter were dedicated to his story, especially as he finally became a sliver of the Superboy we know. Because the story was told in a time jumping fashion it always felt like you were missing something when the action switched to a different time.

So much story potential was untapped and that made it frustrating. I am surprised Superman didn't bring his father to the present for Dr. Veritas to treat or for yellow sun energy to heal him. He was an alternate Jor-El so saving him wouldn't have mattered to Oracle or the past... It was however a good action packed story even if it was very messily executed.

Art - 4: Overall I really enjoyed the artwork, every panel exudes energy but I found it difficult to decipher what was happening at times.

I wish the inking was a little less 'scribbly' so we could enjoy it more but I guess that would also deter from the aforementioned energy in the composition.

Cover Art - 3: I like the art, it still looks great but for the cover of the big finale it still seems pretty lackluster.

Variant Cover Art - 5: The black and white variant where all the art is pulled together is far more in tune with what I was expecting.