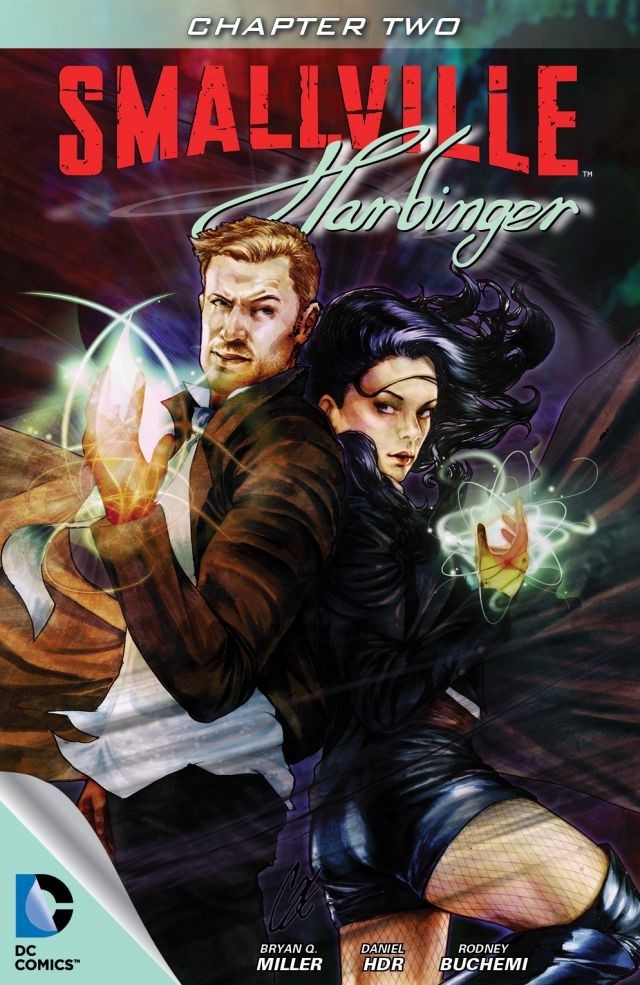 Click to enlarge
Officers Soondead and Gonnabiteit escort the man who attacked Zatanna to jail. Unfortunately for them, but hardly surprising to anyone else, they're intercepted en route. A group of magic-wielding people in hoodies cast a nasty spell that makes blood shoot from the officers' eyes, then free Zatanna's attacker and deliver an ominous message: "Brother Blood would like a word."

Meanwhile, Zatanna and Constantine arrive at his place of "business," which appears to be a black market of cursed items. He informs her that the Book of Magic she's looking for was stolen by a group of cultists just like the one they encountered. The two form an uneasy partnership, which results in harsh quips, verbal jabs, and a mean-spirited spell or two.

Elsewhere, Zatanna's attacker is incinerated by who I can only assume is Brother Blood. While the poor guy is still smoldering, Blood says Zatanna and Constantine will come for them, and when they do, the cult will send Trigon the late cultist's regards.

Story - 4: Time for some exposition.

Now we get to the meat of this story. A cult has stolen the last Book of Magic that belonged to Zatanna's father. Except it was in Constantine's possession at the time, so they stole it from him. Zatanna wants it back, since it belonged to her father. But Constantine says it belongs to him now. See why they don't get along?

This issue reminds me of the first act in a romantic comedy. These two wildly different characters are forced to coexist, and naturally, they don't get along. Time will tell if they come to appreciate one another and things get steamy. (Don't hold your breath.)

This is an entertaining team-up, and it's not one I would've expected. I'm looking forward to seeing how things work out for this duo.

Case in point... I had to reread the part where Zatanna conjured up a dragon several times before grasping how Constantine escaped. This could be the struggle of DC's half-page layouts for digital, but I think an extra panel or two would've helped. If anyone else isn't sure, I think Constantine pulled a Scooby-Doo and ran through a door on one end of the room and reappeared in the doorway on the opposite side.

And if I'm wrong, please feel free to let me know. I'm still scratching my head on this one.