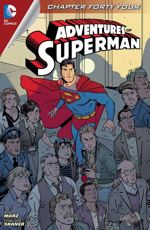 Click to enlarge
Lois Lane pushes her way through the retreating crowd towards the Kryptonian giant robot that is currently creating mayhem in Metropolis.

Meanwhile, as Superman fights and converses with the machine, he find out that the robot was created by Jor-El, Superman's father. Since Jor-El knew of Krypton's imminent destruction he secretly built the robot as a deep-space probe to search out other inhabitable planets.

The robot looked far and wide across space to find a new home for the Kryptonians. However, an alien race called the Vendai found him first. The Vendai took over the machine and used him to find new worlds to conquer.

But the machine is in control of itself again. It is no longer a weapon of the Vendai. Superman, ever the optimist, is excited to see that a part of Krypton still survives.

But Superman and his new found 'brother' don't have time to celebrate their meeting.

The Vendai are approaching Earth.

[To be concluded in chapter three.]

Story - 4: The Good: It just gets better. As Superman fights the robot, he tries to communicate with it. Superman does what Superman does, he tries reason before (or with) brawling. However, he isn't going to put up with this robot's attempts to destroy Metropolis. I love this Superman.

Lois, with Jimmy in tow, climbing up on the rig and telling Superman to quit hogging all the interview time. Lois is Lois is Lois.

The ending is a great draw into chapter three of the story.

The Bad: I could not find anything about the Vendai. As far as I know, they are an alien race made up for this story. Some of you more experienced geeks might be about to tell me differently. Let me know if you know anything about them.

Art - 3: Shaner's artwork is evocative of the 1930s Superman comics. However, Lois and the rest of the characters are dressed in modern style clothes. The colors used are a bit muted. But I like the style. It's simple, yet all you need is there in the panels.

Is it me, or does the Kryptonian robot look somewhat like the alien robot in the movie "Iron Giant"? If the story goes the way of the "Iron Giant", this may have a sad ending.

Cover Art - 3: I love the fact that Superman is in color and everyone else around him is in black and white. The shadow of the Kryptonian monster/robot covers the crowd that is gazing up at it. Brilliant.