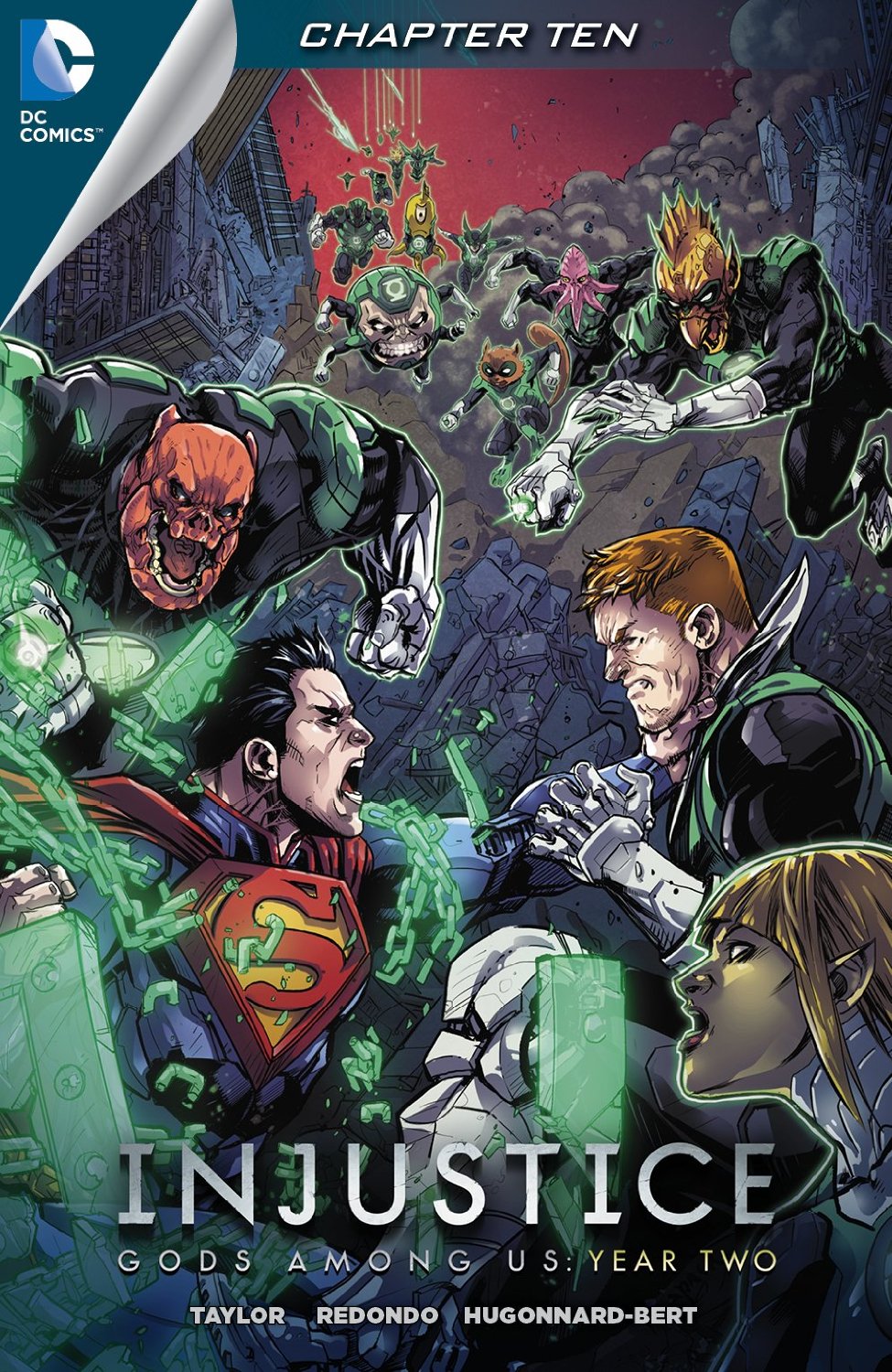 Click to enlarge
A red column of force has been trained on the Green Lantern corps, courtesy of the Justice League Watchtower. When asked to confirm that the GLC is down, Regime Superman can only respond "no" once Killowog exits the smoky exhaust of the blast. A melee ensues, with Regime Superman engaging Killowog. Regime Superman alerts Killowog that he can move faster than thought, hence the GL weapons mean little to him. However, Ch'p interferes with Regime Superman's brain synapses, keeping him from being able to think straight. Ch'p's actions, however, prove no match for the construct that Sinestro fires into Ch'p's brain. Sinestro's appearance means not only a new player, but a whole new ballgame.

Story - 4: The scenes with Luthor and Sinestro, Black Canary and Guy Gardner keep this issue from being a five... that and Regime Superman's approach to this battle. The verbiage is very much out of place with the battle having begun, and Taylor could have gotten to them well before now. To be quite frank, Black Canary's role in this story is totally uninteresting, particularly with the big battle finally commencing. Guy Gardner visiting her is also a head-scratcher, as he should be with the GLC, administering to Regime Superman, whose alert to Killowog is bone-headed and a wee bit of a let down, as it would be interesting to see Superman act out what he's said, but no such luck. More on that below. It's a question to even assume, but more than likely Ch'p's appearance is a shot at a certain raccoon who'll be coming into his own this year in August. The best part of the story is Superman's takedown, and the GLC establishing their bona fides very quickly, showing that they would take Regime Superman and not need to throw a punch. How Sinestro penetrates a GL's personal force field is beyond me.

That all being said, why doesn't Regime Superman take on the GLC by himself? Think about it, Regime Superman was able to remove every paradaemon on Earth single-handedly, and survived a nuclear explosion few of the GLC could hope to withstand. Why does he need help? Why does he take on only Killowog or use the Watchtower to make the first strike? It's a misguided and lazy approach to Superman in general that yields this type of result. Regime Superman states that he moves faster than the GLC can attack him, yet instead of doing just that and Taylor exploring Regime's power-set to another level, he's rendered inert by a chipmunk. Imagine if Superman, using super-speed, strength, invulnerability, etc., really took it to the GLC. Not only would it have made for a more dynamic story, but it also would have legitimized the fears of the Guardians, as anyone who could defeat the elite of the GLC is someone that should be regarded carefully, particularly if the individual is poised to take over their world.

Still, it was entertaining, and here's to hoping that Taylor can keep the pace and interest going, and that the questions regarding Sinestro are answered as well. Injustice hasn't quite licked its sophomore jinx, but this was a great respite from the stories that had come before.