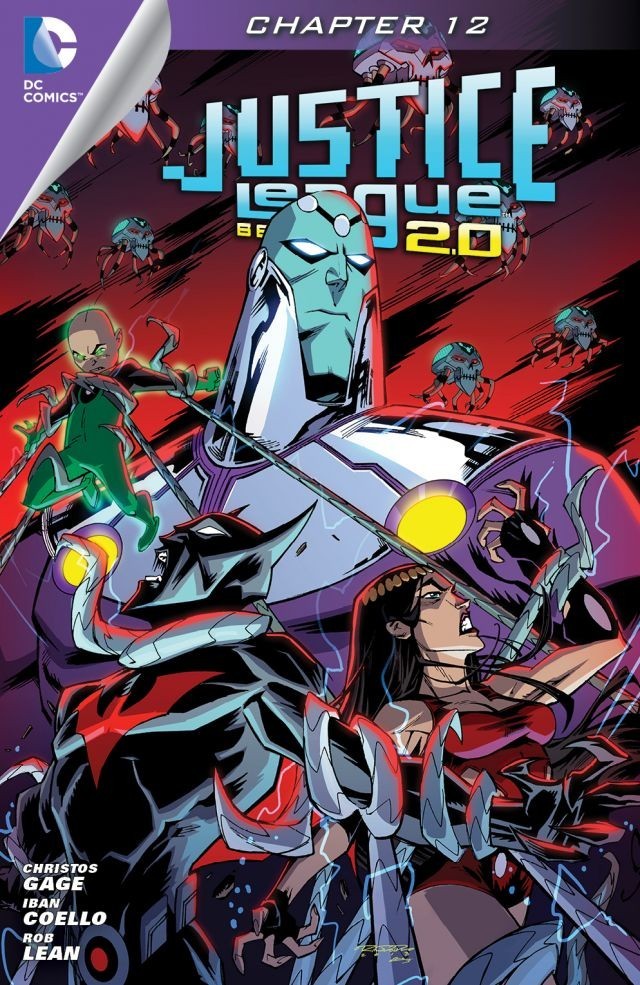 Click to enlarge
A flashback shows that Aquagirl(Marina) returned to Atlantis, and reconciled with Aquaman and Mera, hence the Atlantean forces joining the fray. Superman believes that the Justice League Beyond(JLB) is turning the tide, as they're eking out a defense against Brainiac's insurgency. Magic is deployed in the form of the wizard, Shazam, and Black Adam. Warhawk and Zod encounter Brainiac, who tries to convince Zod to join him. Zod agrees, but once he has gained the information he seeks, betrays Zod with a blast of heat vision. Zod now knows Brainiac's plan, but is rendered unconscious before he can relay what he knows. However, anomalies begin to occur along the prime meridian, and by the issue's end, a face that can only belong to Brainiac has etched itself into the Earth, which Superman can now see from space.

Story - 4: The initial rating was higher, until the reminder that it's only the midway point of an 8-parter. The pacing isn't the issue and neither is the story being eight installments long. However, the wait to resolution, which is strictly unavoidable for the reader, begins to bear here. There are plenty of threads that need to be sewn up by the end, and other threads that are becoming spindly, being split further as the subplot thickens. Still, Justice League Beyond is a solid read and an excellent example of how heroes and ensemble pieces should be handled. JLB doesn't lack for action, characterization, even theme, but it also doesn't sacrifice story for padding, meaning that an 8-parter actually needs eight parts, unlike other story lines that elongate and bloviate to justify a length that seems destined implode. It would work better if the schedule for the book was changed to weekly, which would allow for better enjoyment and for this reviewer to be more timely.

Brainiac is a consistent Superman villain, who is consistently underplayed. He's acquired knowledge from across the universe but he's beaten in the most pedestrian manner, for the most part. The initial appearance of Brainiac, way back in Action Comics #242 (Vol. 1), presented him as a very formidable villain, one that all of Superman's powers couldn't master - and this was the Silver Age Superman! Brainiac required more thought, more cleverness to be bested, and this storyline is a return to that form, at least in the aspect of the threat that Brainiac can and should present. Christos has written a Brainiac who is proactive, and really 10 steps ahead of the JLB. While it may be apparent, Brainiac's current Achilles' Heel, it isn't a weakness that manifests itself for the purpose of a conclusion, but, rather, one that Brainiac could not and cannot prepare for.

The Marvel Family is very intriguing, as we have now seen the introduction of Black Adam, and still without any explanation as to their current status, why Billy is still an adolescent, or why they're mimicking the Rick Jones/Captain Marvel (Mar-Vell) relationship of the Bronze Age. It would be excellent to see future issues devoted to the Marvel Family, as enough has been done to stoke interest in them with the current and former storyline.

A big apology to those following the reviews of Justice League Beyond 2.0, as they've been dilatory for a while. I'm on the northeast coast in the States, and haven't had heat for three months. It tends to slow things down. Fortunately, the fire's back on. ;)

Art - 4: Rob Lean inking just doesn't work as well as Coello doing it himself. Hopefully, he'll get his fire back, too.