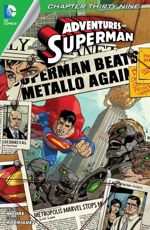 Meanwhile, Superman is helping the prison guards round up the rouge prisoners.

But wait! Metallo hasn't been rounded up, and he's missing. The wardens suspect that Metallo has taken ex-Planet reporter Hobson with him. After all, never hurts to have a hostage.

Hobson, trying to stay alive, tells Metallo that he has been investigating Superman, and that he may know a secret that will help the villain bring down the Boy Scout. Metallo is curious. He takes Hobson back to the ex-reporter's apartment where, frankly, the villain is a bit creeped-out about Hobson's Superman 'shrine.'

Hobson explains to Metallo that he believes that Superman was created by the Daily Planet as a publicity stunt to increase their circulation.

Metallo could care less about Superman's connection to the Daily Planet. This means that Hobson has become useless. Time to get rid of Hobson.

Meanwhile, just outside of Stryker's Island, Superman finds Hobson's phone. Hobson has left a recording on his phone that will help Superman find him and Metallo. Hopefully, Superman will find them before Metallo snaps Hobson's neck.

And, indeed, Superman saves Hobson in the nick of time. But Hobson still doesn't understand why Superman does it. Why does he save people? If he isn't a puppet for the Daily Planet, then why do what he does?

Superman explains, "Mr. Hobson, I can fly. I can punch through tanks and see through walls. I must have been given these gifts for a reason. So, what else would I do?"

How awesome is that answer. Sometimes people do things just because it is the right thing to do. And Superman is obviously that kind of person.

Later, at the Daily Planet, Clark Kent reads a the Planet's front page news. Carl Hobson is the writer. Title of the article, "The Day Superman Saved My Life: (While I Tried to Ruin His)."

Looks like Carl has done a 180 on his opinion on the Boy Scout.

Story - 4: The Good: Is the ending corny? Yes. And I love it. Superman inspires and transforms the lives of the people he comes into contact with. Hobson is no exception.

Superman is willing to save everyone... even the people who are against him. Why? Because it is the right thing to do. The world needs more people like that - super-powered or not.

Also, I like, that throughout 'Exposed,' everyone is in character. I love the characterization of Lois and Jimmy. Too often, writers portray Lois as an annoying character. They don't seem to understand that a woman can be competitive in the work-place without being conniving, rude and pushy.

Jimmy is the young kid trying to impress all the adults around him. But again, he isn't irritating as some writers make him out to be. He is reacting to the world around him as someone his age would.

The Bad: The fact that Hobson believes Superman to be a publicity stunt is a bit unbelievable. I mean, how could a newspaper 'create' a man from another planet who can fly and bend steel? Could a man like that ever be controlled by a newspaper editor? I know a bitter heart will make people believe anything, but... really?

When Hobson takes Metallo back to his apartment, why is Metallo dressed up in street clothes? Did he really think they could hide his metal body from the public?

Art - 4: The more I read 'Exposed,' the more I like the art. I especially liked the scene where Metallo is choking Hobson, and we see Superman save him as he slowly fades and then blacks out.

All in all an enjoyable story.