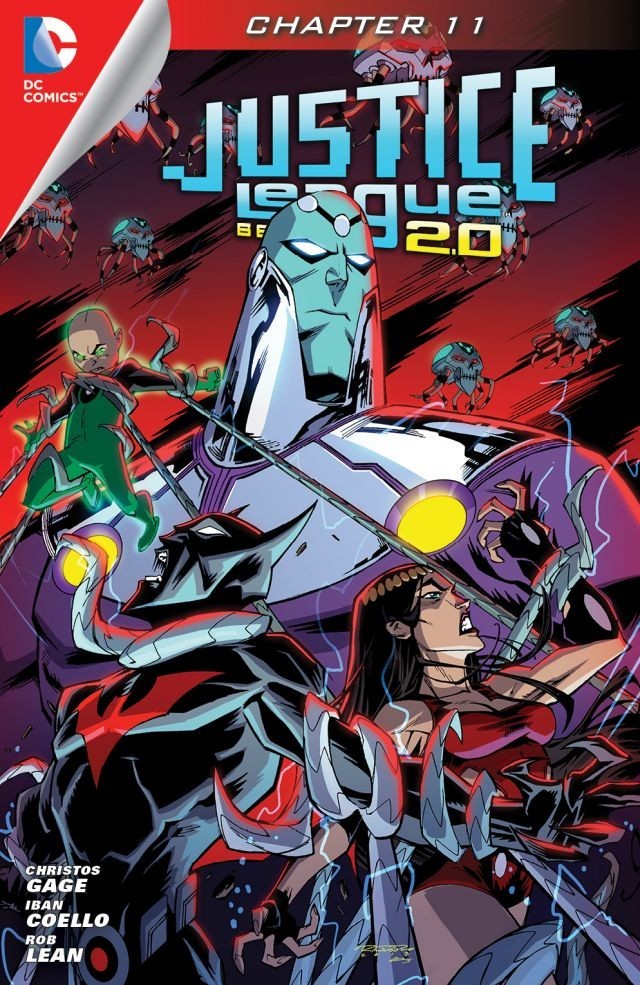 Click to enlarge
The Justice League Beyond (JLB) is hard at the task of contending with an invasion from Brainiac. Earth's technology has been co-opted, in addition to heroes that have a foot in the tech world as well. Superman confronts Brainiac, who reveals that he has planned this attack for years if not decades. Brainiac's planning is shown when the Flash seeks out Dr Fate, and finds him a prisoner to Brainiac's simulacrum drones. When Superman seeks to contact off-world help, the result is the same. Brainiac has planned ahead, and the Guardians, New Genesis, even Apokolips is beset by the machinations of Brainiac.

The Flash is able to gather some magic-users to the cause, and Orion arrives from New Genesis, but only looking to conscript Big Barda and Mister Miracle in the aid of New Genesis. The New Gods make the tough decision to stand with Earth, as Mister Miracle believes that Brainiac can only be defeated here. The decision bears a heavy cost, in that they are exiled, both, from New Genesis. The JLB is barely holding Brainiac at bay, using Mister Miracle's Mother Box to protect some of Earth's technology, knowing that when Brainiac has consumed it all, the game's done. However, at not quite the penultimate moment, Aquagirl returns and with an army behind her: The Atlanteans.

Story - 5: One should never confuse a high rating with perfection. There are probably more than a few things out of sorts with the latest installment of JLB 2.0. However, for what it gets right, it cannot be denied a proper rating, which happens to be the highest that the Superman Homepage has to offer. Cristos has crafted a Justice League, which is based on arguably its most popular version, incorporated elements of the DC Universe proper, updated characters from both the series and the comics, introduced new characters, managed an ensemble cast, and most of all, made it fun and entertaining. There is more action, characterization, plotting in the pages of this digital comic installment, than there is in the average DC comic. Justice League Beyond 2.0, at the risk of inviting debate, is the best Justice League offering on the current market. It's only after reading the issue thrice that everything it is was truly taken in, at least for this reviewer. Some issues are a fast food fill, and others a slow digest, but it's good to be reading a comic that gets it right and to know that it's not perspective alone, but grounded in the gravitas of fact.

Superman is a tough character to truly use effectively in Justice League offerings, as he's a JLA/JLU/JLE/JLB onto himself. In JLB, Superman is a leader, a thinker, centered in action, and best of all, necessary to the story. He doesn't just show up, make a bold statement, then disappear for the remainder of the story a la Johns' work. Neither does the man of tomorrow steal light from the rest of the team, as we get great interaction with Big Barda and Mister Miracle, reinforcement with the Flash, Green Lantern, and Warhawk, and development with Aquagirl. Christos has done more to develop Captain Marvel, introduce the Marvel Family, make them interesting and intriguing, in a shorter span of time and panels, than what was done in the Justice League reboot... where Captain Marvel has all but disappeared. It's smart storytelling as three installments in, as Christos shows us his planning through Brainiac's offensive and the preparedness of it. We know that the JLB is going to save the day, but for the first time in a while, we can actually wonder as to how in terms of story, rather than why in terms of plausibility. A lot is done, correction, a lot has been done with the installments for this storyline, and while the payoff may not deliver, it's without fanboy fervor, but earned faith that one can believe Christos will win the day.

It was almost embarrassing to write this review, and shamelessly gush over the issue, especially since JLB 2.0 has been high rated by me sine the onset of the "System Override" storyline, but dammit if it doesn't feel good to read a comic and be entertained and pleased, rather than drained and bemused. JLB 2.0, as said above, is the best Justice League being offered these days, and it's a wonder why talented writers like Johns cannot deliver the same quality without resorting to gimmickry, which has been nearly the last year and a half of the Justice League. The only downside is the wait between installments, and that I can't actually hold it in my two good hands.

Art - 3: Rob Lean may be a very good inker, but not for Coello, who should continue inking his own work.