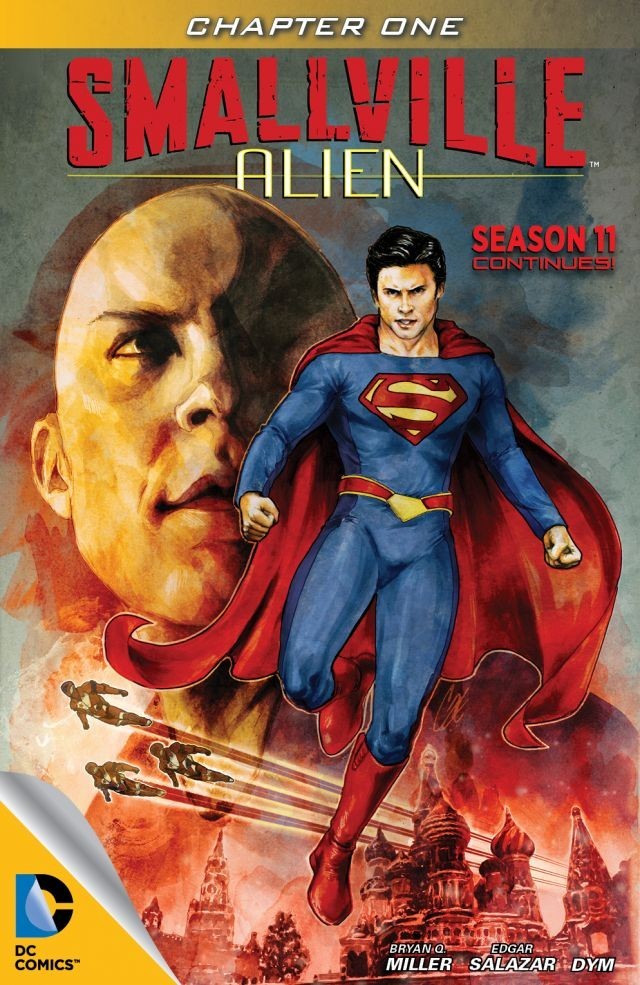 Click to enlarge
After reminiscing about his childhood and remembering how his father talked him through being nervous in front of crowds, Superman - hovering in the stratosphere awaiting his next mission - hears a disaster in progress and rushes to help. A super fast train has apparently lost control, and it's up to our hero to stop it.

Naturally, he does. And he's rewarded for his efforts with a barrage of questions demanding to know why he never admitted he was an alien before.

Meanwhile, something falls from space and lands in the Russian wilderness. The hapless Russian truck driver who witnesses the crash discovers... an unconscious man!

Story - 4: Greetings. It's me, your friendly, Man of Steel-hating "Trollywood." You're probably wondering why it's my name in the reviewer's slot instead of Marc Pritchard. I'd love to tell you an exciting and tragic story of how I ousted him in a way that would make Lex Luthor smile. But the truth is, he was kind enough to give me a shot at contributing to the site, and I was all too happy to oblige. I'm a writer by trade, and the chance to write about Superman was just too good to pass up. I've got some big shoes to fill, but I'll do the best I can. And maybe we'll all have a good time along the way.

Smallville: Season 11 issues have traditionally been quick, light reading. I find I can usually read through one in a matter of minutes. Sue me, but that's part of their appeal. That's not to say they don't have some poignant things to say once in a while, and this issue does.

Clark's memory of being talked into speaking in front of a crowd was charming and, in my view, clever. Superman wasn't always super. As we see here, he was once a frightened child, just like everyone else. We've all been that nervous youngster about to step in front of a large audience, and we've all felt that twinge of fear. Haven't we?

That very human moment also helped illustrate just how unfair it was later in the issue when people - people Superman had just rescued, in fact - suggested he was a liar, a deceiver, and an alien. Such scenes tempt me to play devil's advocate and insist those people wouldn't do that; they'd be thankful. But I'm not so sure I'm right. Fear seems to be our natural response all too often.

I toyed with giving this a 3, given the fact so little happened. But what did happen was an intriguing first chapter. It strictly set the framework for the rest of the story, but it did so in a way that made me interested for more. So it gets a higher score for that.

Art - 3: It would've been 4, maybe even 5. The art was good, very good. It's dynamic and has some real energy to it, particularly the train rescue. It probably deserves a 4. But I'm just a stickler for keeping the drawn characters similar to their television counterparts when the series is supposed to be a continuation of that. Unlike "Olympus", Clark/Superman resembles Tom Welling, which was good. But Martha and Jonathan were completely wrong.

The Kents were still fairly young when Clark was a freshman entering Smallville High in Season 1. They were still just a few years shy of middle age, in fact. Yet, in this flashback, when we see Clark as a grade schooler, they're both showing some wrinkles and (the coup de grâce) Martha has gray hair. Her hair was flaming red when Clark was in high school, and she barely showed any hints of gray even in Season 10. Yes, I'm nitpicking, and I'm just being the dorky fanboy who just looks for things wrong, I guess, but little things like that bug me. Come on, DC. Little things are important. It shows that you pay attention, that you care.

Cover Art - 4: Very solid cover. I've felt this way about most of Smallville: Season 11's covers. They all display some very cool artwork that, unlike certain panels I've mentioned already, accurately portray the characters like the actors who played them. This cover actually helps intrigue me more about where this story will go. We haven't seen Lex yet, but he's prominently displayed here. And a story about Superman being called "alien" is perfect for him.