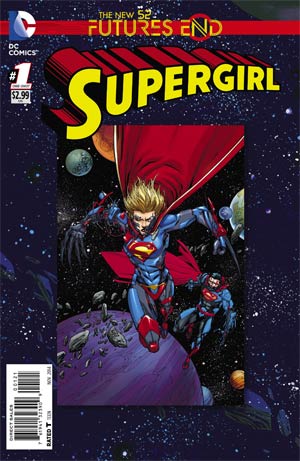 "The Perfect is the Enemy of the Good"

Click to enlarge
Five years from now, Kara Zor-El has become a Cyborg Supergirl thanks to Brainiac making her that way. Known as Herald 2, she and the Cyborg Superman return to Earth in search of the next step in human evolution - the species Neo Sapiens - for their new mission since they became independent from the Collector of Worlds. The robotic Kryptonians seek to re-create Krypton. Will they succeed, or will some force impede their plans for the third planet from the sun?

Someone from Kara Zor-El's previous life confronts the Supercyborgs. Adam Blake, better known as Captain Comet, is attempting to get Supergirl to know more about herself and the love she shared with him. Adam enters the Maid of Might's mind causing the cybernetic blocks to cease. Memories of a group called the Wanderers and her love for Adam flood Kara Zor-El's mind as Cyborg Superman orders her to destroy Captain Comet. The Lost Daughter of Krypton will have a tough choice to make as her struggles with her past and present begin to affect her future.

Story - 4: Tony Bedard seems back on track after last month's disappointingly average entry. Yet, I do wish he had delved more into Supergirl's past with Captain Comet and the Wanderers for those like myself who haven't yet read the rest of the Future's End books. This is why I didn't give the book the maximum rating.

(Grabs sonic screwdriver to reverse polarity of the neutron flow) I'm going to act a bit like Doctor Who with the questions this issue brought up. Is Kara's future a fixed point in time? Can it be changed? Will she even want to change it? These are just a few of things I asked myself after I read this issue. Tony Bedard planted the seeds in my mind, and I have faith he will answer my curiosities to a satisfying conclusion. After all, even if it has moments that seem borrowed from Twilight, this entry in Future's End was an entertaining book of the highest level.

Art - 4: There are some panels here and there that look a bit rushed and somewhat off, but otherwise, Emanuela Lupacchino's style seems to gel well with Tony Bedard's story. She gives the title some good visuals and has great potential as an artist.

Cover Art - 3: I normally don't go for gimmick covers these days, but this one was an eye popper. DC did a fine job in general with their Future's End line, and the Supergirl cover is fantastic.