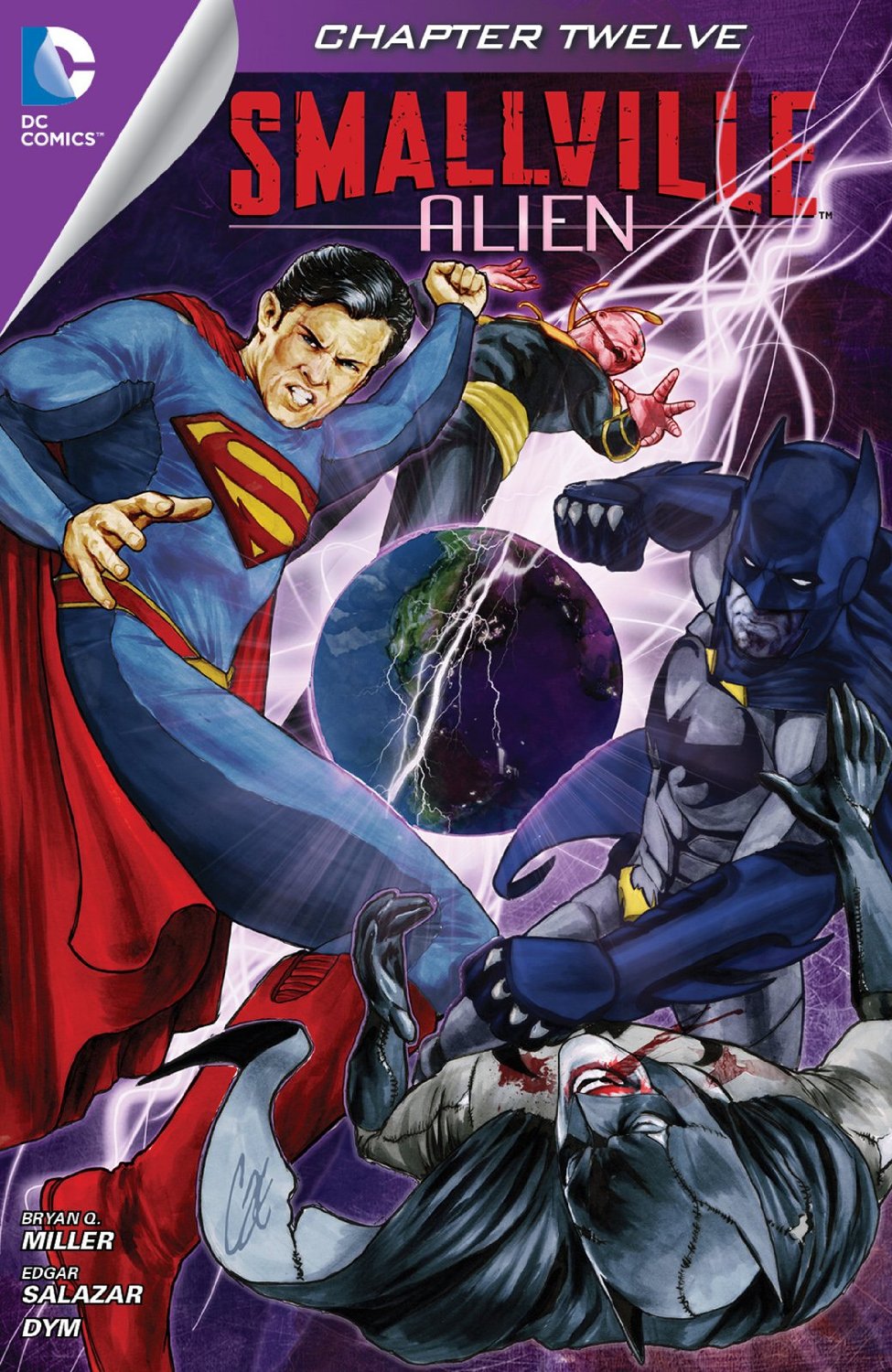 Click to enlarge
Lex Luthor wakes up in a hospital, where Clark Kent is waiting by his bedside. Otis was there earlier, but Clark convinced him to take a break. Lex bemoans his efforts against the Monitor, which he says put Clark and the world in danger. Clark tells him the Monitor probably would've tried to destroy the planet with or without Lex's intervention.

Clark starts to leave, when Lex tells him he's a good liar. Despite Clark's consoling words, Lex says he can see the disapproval in his eyes. And he suspects he saw that look in his "past life," before he lost his memories. Clark acknowledges something of their history, saying that many times Lex's need to save the world often butted heads with his ego.

Later, at the Watchtower, Chloe, Tess, Lois, and Clark discuss the latest happenings while reading a Daily Planet newspaper with "The New Cold War" as the top story. They suspect the Crisis has only just begun.

Bruce Wayne arrives and informs them his evil doppelgänger is safely in custody with John Jones. Considering the threats facing the planet, he agrees to join the Justice League - temporarily.

Meanwhile, at S.T.A.R. Labs, Dr. Emil Hamilton and a team are beginning an autopsy of the Monitor's remains. Diana Prince arrives and tells them a communication device the Monitor had previously is missing.

As it turns out, Lex managed to lift that particular item. After uttering a whispered thanks to Otis for saving his life - one Otis almost certainly didn't hear - he sends a message out to the Multiverse announcing himself and saying, "We need to talk..."

Story - 3: I enjoyed this story overall. I wanted to rate it higher, but there are a few things that bug me.

First and foremost, that's all they're giving us about the evil, alternate-earth Bruce Wayne? Really? You introduce one of the more interesting alternate versions of a character we've seen since... well, a really long time...and he gets tucked away nice and tidy? Most likely never to be heard from again? I don't much mind the blatant convenience of it all (Smallville on television was just as guilty, and I've always been willing to look past it), I just really wanted to learn more about this guy.

There's also the dynamic between Lex and Clark. It's interesting, to be sure. Examining their differences is still fascinating, and the touch of melodrama when we see hints of regret from both of them is no less compelling. But sooner or later, you have to wonder why Lex doesn't just ask Clark outright, "Why won't you tell me about our history?"

I like that this Crisis isn't completely over yet. I want to explore it more. But I also hope we take a break from it with the upcoming Lantern storyline. Let's also hope any future side stories turn out better than Harbinger did.

Art - 4: Salazar's art is as good as always. There is one gripe I have, though, and it's hard to say who to direct it at, the artist or the writer. But I'm putting it here.

This is the copy editor in me nitpicking, but headlines don't have periods at the end of them. They don't. And yet, the Daily Planet, the most prestigious newspaper in America, has a period at the end of the headline for its top story. I can only assume there's a subplot somewhere about a young editor just being hired and he's about to get an earful from Perry White.

Also, Bruce and Clark practically look identical at the end of this, right down to the suits. Oh my... you don't suppose they're doppelgängers of one another, too!??