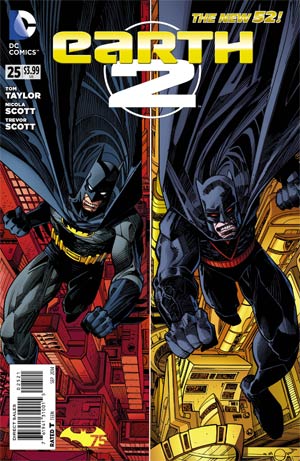 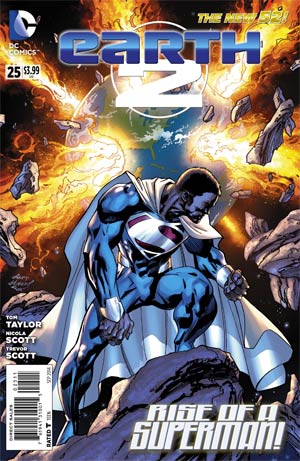 Click to enlarge
Hawkgirl, the Flash, and Green Lantern are leading a horde of paradaemons away from Washington DC, but Green Lantern cannot hold back Bedlam any longer. Beguiler is about have the paradaemons attack, but Aquawoman arrives and drowns the horde. Green Lantern engages Beguiler, but she repulses him easily in his fatigue. The Flash grabs Beguiler and runs with her until he speeds into infinity, stranding her there. Batman and the remains of the World Army stand ready as Bedlam has Terry Sloan release a beam that will draw the Earth to Apokolips. Green Lantern moves to hold the Earth from moving, while Batman and the others make for the power source of the beam. In Kansas, Pa Kent can no longer stomach the macabre meal that he has sat down to, and tells Brutaal "Screw Darkseid!" and is promptly incinerated. Brutaal is summoned to dispatch Green Lantern, and leaves a shocked Ma Kent with Red Tornado. Val Zod relates his origins to Jimmy Olsen, when Doctor Fate arrives and places the Helmet of Nabu on Val Zod. The effect is akin to an epiphany and Val decides to take on Brutaal, engaging him just as Brutaal attacks Green Lantern.

Story - 4: The rebooted Justice League series for the New 52 worked the traditional trope of having mighty heroes band together to overcome a foe or situation that none of them could dispose of alone. In comparison to the events of Earth 2, that story seems paint-by-numbers and almost childish. Taylor has definitely given new energy and purpose to the ensemble book, and their motivations for banding together. In Justice League #1-6, the heroes come together in the manner of a situation comedy and stay together for little reason other than proximity and script. The Earth 2 heroes, however, don't come together and still have yet to come together. The situation is so desperate and bleak, that becoming a unit is a hurdle in itself. Hawkgirl and Green Lantern are dealing with paradaemons, while the Flash handles Bedlam. Red Tornado entertains Brutaal, while the Batman, with Doctor Fate, need to retreat from the battle, and all the while, the decision of Val-Zod will decide the fate of the Earth. This is not a team, not even close, but it is team building, and done in such a manner that no one who reads Earth 2 will be satisfied with anything less ever again.

Earth 2 began as a title where the wonders had fallen and new wonders needed to rise to take their place. Robinson's departure allowed for Taylor to revisit the established theme, but giving that age of wonder and its last wonder, a final sunset, albeit a brutal one. We saw the final sacrifice of the Batman to save the Earth, and Wonder Woman cut down in battle by Steppenwolfe, but Superman disappeared, taken by paradaemons, and what has returned is Brutaal. The murder of Jonathan Kent should stiffen the spine of readers holding to the hope that Brutaal could somehow be redeemed, which should never have been the case. Once you change fundamental aspects of any character, they are no longer that character (hence the use of Brutaal, rather than Evil Superman) and Brutaal is as fundamentally changed as one can be. However, Earth 2 needs to move on from the wonders who left everything on the field for their world to live, and while it can be excruciating to see Brutaal commit and speak atrocities with the shield of the Man of Tomorrow before him, it's a reminder that we as readers need to let go, sometimes, and allow the torch to be passed and the legacy to continue... and with Earth 2, this is one of those times.

The trope of the young, new hero being thrust into events and having a trial by fire towards becoming the legend that resonate across the ages, is one that has been tweak in the last few years. The hero now makes considerable mistake (errors that should convince him that heroing isn't his meteir, in all honesty), but his heart was in the right place, so we accept his flaws and hope for better in the sequel. Val-Zod, however, may present readers with a return to form: a hero who's heart is in the right place, but can also be an actual hero. Granted, it takes an act of magic to get Val to cross the threshold to even be willing to face Brutaal, but it is his clarity once willing that is familiar and welcome.

"I understand now. I won't kill Kal-El - but I need to fix what he has broken."

"Where are you going?"

"Where I am needed."

No speeches, no brooding, no need of a tutorial, just a lad who understands he has a job to do, and as he leaves, rising against the backdrop of a bright sun, he smiles at Jimmy Olsen. It is a welcome sight. Too much is made of a gloomy, brooding face. It portrays a false toughness, a scary appearance to ward off conflict, rather than quell it. However, heroes aren't about their own personal toughness, but that power, that might, in service of the people. When the world is bleak, and all hope is lost, the reassurance of a smile, the confidence to beam and have someone or the whole world put their trust in you, because you'll make everything all right, even if it means the ultimate sacrifice, that's badass. You can kill a man, but can you inspire the world to hope again? Better yet, can you do so while maintaining your integrity, reminding the world why such a thing matters?

The baddest men I ever knew were some of the calmest and most peaceful people you would ever meet. They were happy to be alive, inspired those around them, and smiled at you like you had just won the lottery. They made your childhood fun, corrected you with love, and if you were ever in trouble they would save you... even when you were at your most undeserving. Their names were Abba, Teacher, Friend, Priest, Brother, Wife, and Father. I recall their kindness and never forget their overtures of love. I remember them smiling at me, like there could be nothing better in the world than to be me. Heroes do the same, whether actual or fictional, and with a single panel, amidst a somber and stark scene, Taylor may have given readers something that we haven't in some time: true heroism and a true hero.

Cover Art - 5: Had this been Superman's new costume for New 52, I would have been on board.