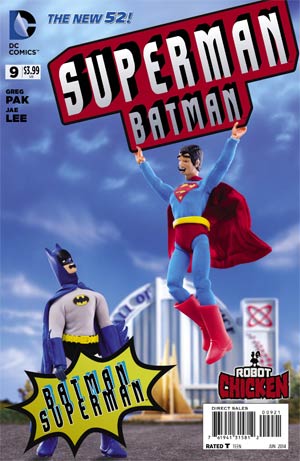 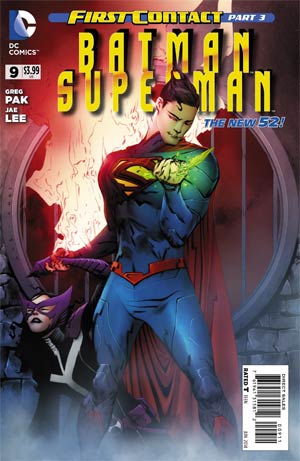 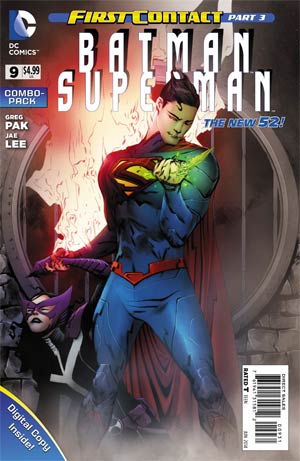 Superman and Huntress are entering New Gamorra when they're stopped by cops who take away Superman's kryptonite necklace, which was keeping his powers in check, sending him into the ground with Huntress trying to catch up. In Kaizen Gamorra's secret lab, Batman and Power Girl fight through Kaizen's supersoldiers as Batman begins to remember his journey to Earth-2. Elsewhere, Huntress catches up to Superman and gives him his kryptonite necklace as he also begins to remember Earth-2 for himself. Just then, Superman gets Toyman's package, armor, which will keep his powers in check.

Superman and Huntress break into Kaizen's lab to help Batman and Power Girl face the supersoldiers and defeat them. Upon discovering a portal to Earth-2, Superman tries to re-purpose the armor to contain the portal but instead the energy from the portal burns out the nanites that were causing his power-fluxes. Then, Huntress and Power Girl prepare to return home.

Story - 3: It's not that I didn't like or enjoy this story, because once you read all of "First Contact" as a whole it's pretty entertaining, but since I've been reading this story on a month-by-month (or in this case, months) basis, I kind of forgot and didn't really care about this story. Batman/Superman Annual #1, which came out last month, was by far much more enjoyable and entertaining than this issue of Batman/Superman, and that issue was a sequel to a story that I didn't enjoy as much while this is a part of a story I was excited for. Batman/Superman seems to be a very hit-or-miss book, which is I guess why this is my last review of this title.

But back to "First Contact"! I liked the interactions between Superman and Huntress, how she was very accepting of Batman and Superman at the beginning of this arc and now she's very, maybe not judgmental, but very dismissive of them.

I thought it was interesting that Superman and Batman began to remember their adventure to Earth-2 from the "Finest Worlds" story arc that kickstarted this title, it's cool to see all that come full circle, especially with World's Finest #21 (Part 4 of this arc).

The comments Toyman made about Superman wearing armor were kind of irritating to me as someone who's a fan of the traditional Superman, specifically the traditional suit, but he does bring up a good point that the younger generation of comic book fans (myself excluded) enjoy armor and a more modern look on their favorite characters, Superman included. I'm sure someone in the comments will discuss this more, but it wasn't something I was a big fan of.

Anyway, that's it for my final review of the Batman/Superman comic. I wish the best of luck to the next person to review this title as it's not only very hit-or-miss, but it's kind of a chore to write about, which is sad given that the (original) World's Finest superheroes are my favorite comic book team-up.

Art - 2: I really don't know why it is but I just can't get into Jae Lee's art. His cover art is generally pretty good, but his interiors always underwhelm me.

Cover Art - 2: However, this month his cover art ALSO underwhelmed me, which is odd because usually I really enjoy his covers.

Cover Art (Variant) - 5: This I did love! Especially because of Superman's sign, which switches the places of the title names. Batman's face is priceless. Love it!