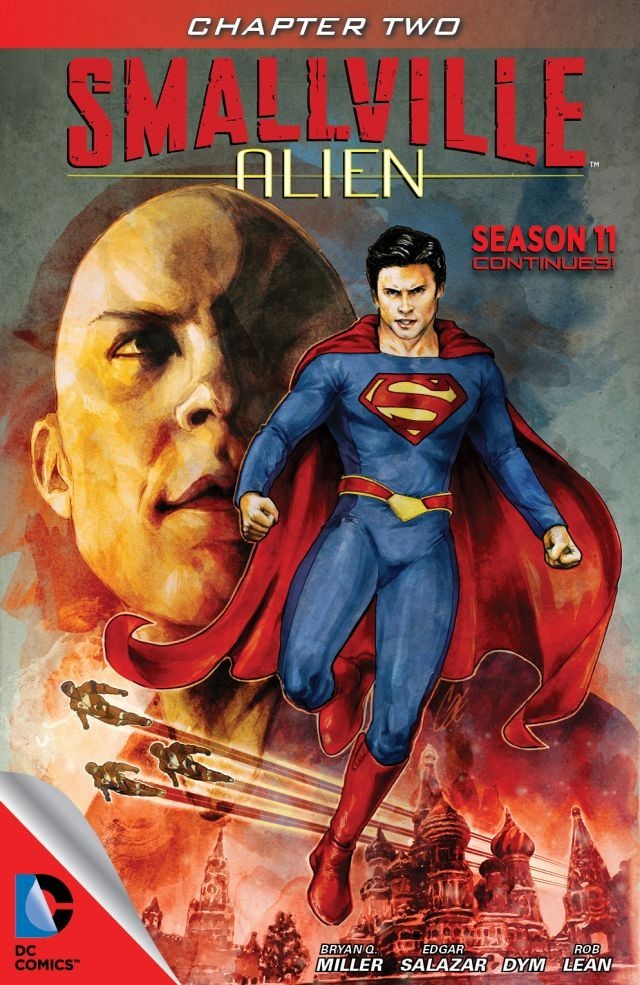 Click to enlarge
Despite many Americans voicing concerns and fears over Superman being an alien, the President of the United States arranges a meeting where he provides our hero with photographs of the man who fell to earth last issue. That man, Superman says, is something called a Monitor... one of whom killed the Chloe of Earth-2 many, many issues ago (and sort of looks like a hybrid Monitor/Lex clone, if you ask me)... and it's definitely something to worry about.

Meanwhile, Lex is planning to visit Russia in order to learn more about Earth's newest visitor, and the residents of Watchtower - Chloe, Lois, Clark, and Digital Tess - discuss the situation and provide some handy exposition to get us all up to speed. For those who don't remember, Chloe-2 arrived in a cornfield and warned that Earth-2 had been destroyed; shortly after, she died at the hands of a mysterious monitor. Her memories were uploaded into this earth's Chloe, and they've done little more than give her lots of sleepless nights. So far, anyway.

Clark then makes arrangements via his Daily Planet credentials to hitch a plane ride with Lex on his trip to Russia. Shortly before boarding, Lex sees a familiar red and blue figure fly overhead and assumes it's Superman. He's wrong, however; it's Supergirl!

Story - 4: The groundwork was laid last issue, and now we're moving forward. Unlike Olympus, which seemed to just drag on like a handicapped snail (even at the action-heavy end), this one's moving along at a nice pace so far. I like what I'm reading, and I want more. How exactly is this Smallville Crisis going to pan out? And is Ultraman going to make an appearance? That's the sign of a good story, and a good comic, in my eyes.

So what did I like? Well, the Oval Office scene was priceless. Superman is at his "Big Blue Boy Scout" best, catching a poor secretary when she trips, declining a drink while on the job, and in turn, inspiring the President to do the same. Sure it's a bit hokey, but that's the point, isn't it? It's like Superman telling Lois that, statistically speaking, flying is still the safest way to travel after she nearly crashed in a helicopter, then turning around and hiding a big grin on his face as he walks away. Classic stuff.

Henry, Zack, you guys might take notes on this.

Also, Lex and Otis are priceless. I know the popular trend is to wish Bruce Wayne had made an appearance in Smallville on TV, but I'm more disappointed Otis Berg didn't merit one. Of all the things Bryan Q. Miller has added to the Smallville mythos, Otis Berg is among my favorites. His scenes with Lex are both amusing and, believe it or not, charming. He's every bit as bumbling as Ned Beatty's character in Superman: The Movie (clearly, Bryan's inspiration for creating him), but there's an actual sweetness to him here. He's not a villain, like Lex (or Ned Beatty's version), just a misguided oaf trying to do right and who happens to be dedicated to the wrong guy.

Incidentally, does anyone but me find it amusing Marc Pritchard kept complaining that this series wouldn't finally get to the Crisis it promised, and now that he's left and I'm behind the desk (metaphorically speaking), it looks like the Crisis is front and center?

Art - 4: Okay, I'm going to start here with an apology to DC Comics and artist Edgar Salazar. Last week, I assumed a character was Martha Kent, who was actually his teacher, and called DC to task for not making sure the drawn characters resembled their television counterparts. I was wrong, as someone quickly pointed out. Not sure how I made that mistake. I read through the issue twice and didn't notice. But after being told, I went back, and of course, there it was right in front of me.

So, DC, Mr. Salazar, if you do happen to visit this site, my apologies. This issue gets a 4, and if I can retroactively award the same to the last issue, consider this just that.

That aside, the art is again solid this time around. This story is more dialogue-driven and with less action, but the energy is still there. The visuals are strong and remind us of the themes being examined as the story progresses. Case in point: Newspaper headlines about Superman's extra-terrestrial origins while Lex and Otis discuss Russia.