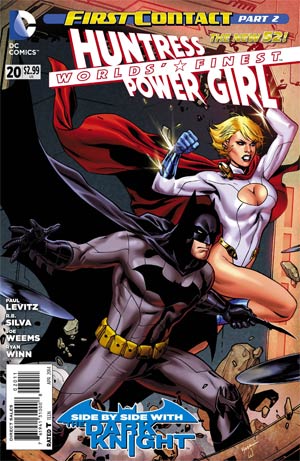 Click to enlarge
Falling from the sky, Superman and Power Girl are caught by Batman and Huntress as they land back on New Gamorra. On the ground, Power Girl is stable, but Superman is now having the same power trouble Power Girl had. Superman begins to glow, but instead of leaving, Batman puts a Kryptonite ring round his neck to keep his powers at bay. Then Power Girl and Batman fly away to help Superman elsewhere.

Huntress helps Superman up, but quickly hides him as a villain comes out of nowhere and tries to take on Huntress, who beats him. Elsewhere, Batman finds his way into New Gamorra's intranet firewalls and finds that they have built an army with Kryptonian DNA. Power Girl on the other hand finds Kaizen Gamorra and discovers that Earth-2, her home, is still out there. On the ground, Superman and Huntress, under new aliases, begin to enter into New Gammora.

Story - 4: Although this issue isn't as fast-paced as Part 1 was, it certainly does its job. Not to mention I'm a little biased as I really love Paul Levitz.

The switching of the teams with this issue, from Superman/Power Girl and Batman/Huntress to Superman/Huntress and Batman/Power Girl, was interesting and it was cool to see how, although Huntress may be [a] Batman's daughter, she is actually a lot like Superman, and the same goes for Power Girl.

I'm glad in this issue that Power Girl does more as she somewhat took a backseat in Batman/Superman #8 where she seemed to just play the victim, at least for the most part. Here, she's back to her usual self, powers and all, and actually helps further the plot a little bit.

Although he was the "victim" in this issue, Superman's roll didn't really change much from Batman/Superman #8, which was good. I'm glad there is some consistency with Superman somewhere in the New 52, even if it is in the two minor books that are crossing over.

Overall, another good issue. I am really looking forward to whatever comes next!

Art - 5: I loved the art. The art on World's Finest has always been pretty good overall, especially the past 10 or so issues. Nothing but good to report here.

Cover Art - 3: When I picked it up I really thought it was a puzzle cover that would connect with Batman/Superman #9 or World's Finest #21, but it doesn't look like that's the case sadly... Even so, I think the cover looks pretty neat, although if it is a stand-alone cover I would prefer Huntress and Superman to be on the cover as well.