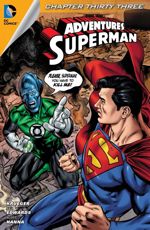 When we last saw our heroes... and villain... Superman was down-for-the-count due to Kryptonite, Brainiac was revealed as the force behind all thus villainy, and our Dark Lantern just could not believe his own misguided actions were about to bring down the last Kryptonian...

Brainiac, DC's stoic-megalomaniac, opens the final chapter of this story by doing what most self-absorbed villains do...

He isn't just going to do an evil deed, he's going to tell the heroes about it... in detail.

Nothing can stop him, and Brainiac is sooo happy about his soon to be victorious... victory.

As Brainiac begins to assimilate himself to Superman, Superman, though in agony, tells the Green Lantern, that he forgives him for Krypton's demise.

The Lantern is shocked at Superman's act of forgiveness and thinks to himself, "A man like Superman should never die."

Inspired by Superman's selflessness, The Lantern, once again, finds the hero within himself.

First he shuts Brainiac up (dude, second best part of this chapter), then he saves Superman by sacrificing himself (dude, best part).

The ending is spectacular, and I don't want to spoil it for you. I suggest you go read it.

In the last scene, we see the Lantern ring looking for its new replacement.

I'd like to know who receives this hero's ring. It would be a great story.

Story - 4: The Good: This Green Lantern hero had lost himself to guilt and self-pity. Superman made him realize that he could still do good. The Lantern realized that he could save the man who forgave him of his most terrible mistake. Stories where Superman inspires others to do good always move me.

I also liked that the writer showed the audience the different philosophies of someone who truly cares about life, and someone who just wants to preserve the shadow of life.

Brainiac is cold. He truly is a megalomaniac. He believes in his own self-importance to the universe. He believes that it is only through his computerized catalogue that history and life can be preserved. He has no concept of the true value of a life.

Green Lantern, however, understands the value of a life. Even if it is just one...

And as a being with a hero's heart, Green Lantern is so very grateful that he got the chance to save the last Kryptonian.

The Bad: I would have liked to exchange Brainiac's exposition in order to see more of the Green Lantern's interactions with Krypton and its citizens. Maybe in the future DC will write a story about Krypton's past and include the Green Lantern Corps. That would be awesome.

Art - 4: The art is fantastic. When Brainiac starts to mummify Superman, I was like... oh no! The last shots of Brainiac and the Lantern's death were dramatic and intense. But my favorite scene was the one where a lady off the street was reaching out to a recovering Superman. Sometimes even the most powerful man on Earth needs help.

Great story. Just wish there had been more of it.