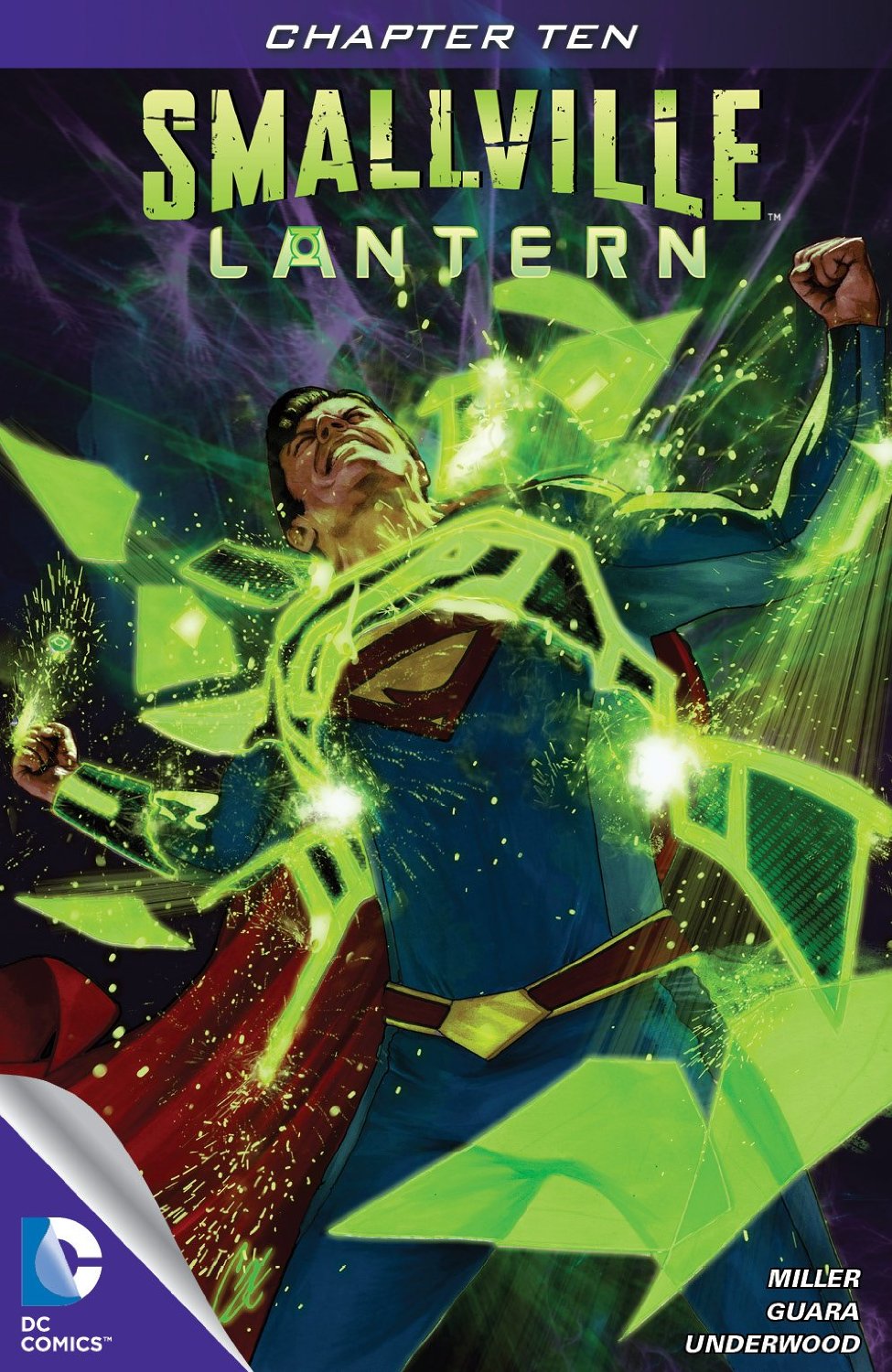 Click to enlarge
Tess and the rest of the Watchtower crew monitor the Yellow Ring situation in Gotham, while Steve Trevor and Wonder Woman report on it in Washington, D.C. According to Trevor, the rings focused on the U.S. Congress, and mystics working for the D.E.O. are zeroing in on Prometheus. Zatanna uses her magic to send Green Arrow - with his new suit of armor - after him.

Tess and Chloe then contact Emil Hamilton at S.T.A.R. Labs. They deduce that, unlike the Green Rings, the Yellow Rings actually control the people wielding them. Emil takes that notion a step further and determines that the ring may also share a single communication frequency.

The ladies also contact Batman in Gotham and ask him to secure a single Yellow Ring for them. Batman agrees to try, while Superman battles John Stewart. He tells John that it's okay to experience fear, that it's not an emotion anyone should repress or ignore. Stewart responds by impaling Superman with a Yellow Ring constructed sword.

Meanwhile, the remaining Green Lanterns are monitoring the battle from above the Earth. They wonder if they have the power to stop Parallax and his forces before setting off in search of the one thing that frightens the fear entity.

Story - 4: Like the previous issue, this one keeps the momentum going. Prometheus needs to make an appearance soon and reveal his link to everything that's happening. He's become noticeably absent during all of this.

I'm not sure whether to roll my eyes or chuckle knowingly at the scene where Yellow Lantern rings take over members of the U.S. Senate. It's hardly and unfair suggestion. I can think of several Congressional leaders who would make excellent members of the Parallax Corps. But the part where one party becomes Yellow Lantern in the Senate and another party becomes them in the House feels like forced political correctness. There's no need to try placating both sides of the aisle, especially when you're not naming specific leaders or political parties anyway. Just say lots of Congressman are Yellow Lanterns and leave it at that. Readers like myself who follow American politics can fill in the blanks ourselves. Readers who don't... don't much care, anyway.

The standoff between Superman and Stewart is nicely handled. It could've devolved into conversation ripped out of Star Wars, with Superman espousing the dangers of fear leading to anger.

And anger leads to hate.

That's not what happens here. Superman instead tells Stewart fear is a perfectly natural human response to danger. It shouldn't be repressed or ignored, as Stewart has been shown to do. Fear, Superman says, can be used to make us stronger. I don't recall Yoda ever saying that.

And Stewart impaling Superman is probably the best cliffhanger ending this series has done yet. I find myself more eager than I've ever been to see the next issue.

Art - 4: We've changed pencilers midway through this story. While there was nothing wrong with the previous offerings, I definitely prefer this artwork. The minimalist approach is gone, and in its place are very detailed images of the characters and their surroundings.

Parallax, however, was the best thing about this series artistically, and it was the previous artist who brought him to life (so to speak). We'll see if this new artist can do the job as effectively.

Cover Art - 5: Technically, it's a bit late, since Superman broke free of the Lantern armor in the last issue, but this is still a striking image. It effectively tells the story (even if it's late) and presents a very iconic image of the Man of Steel.

To date, this story arc has enjoyed the best covers in this series.