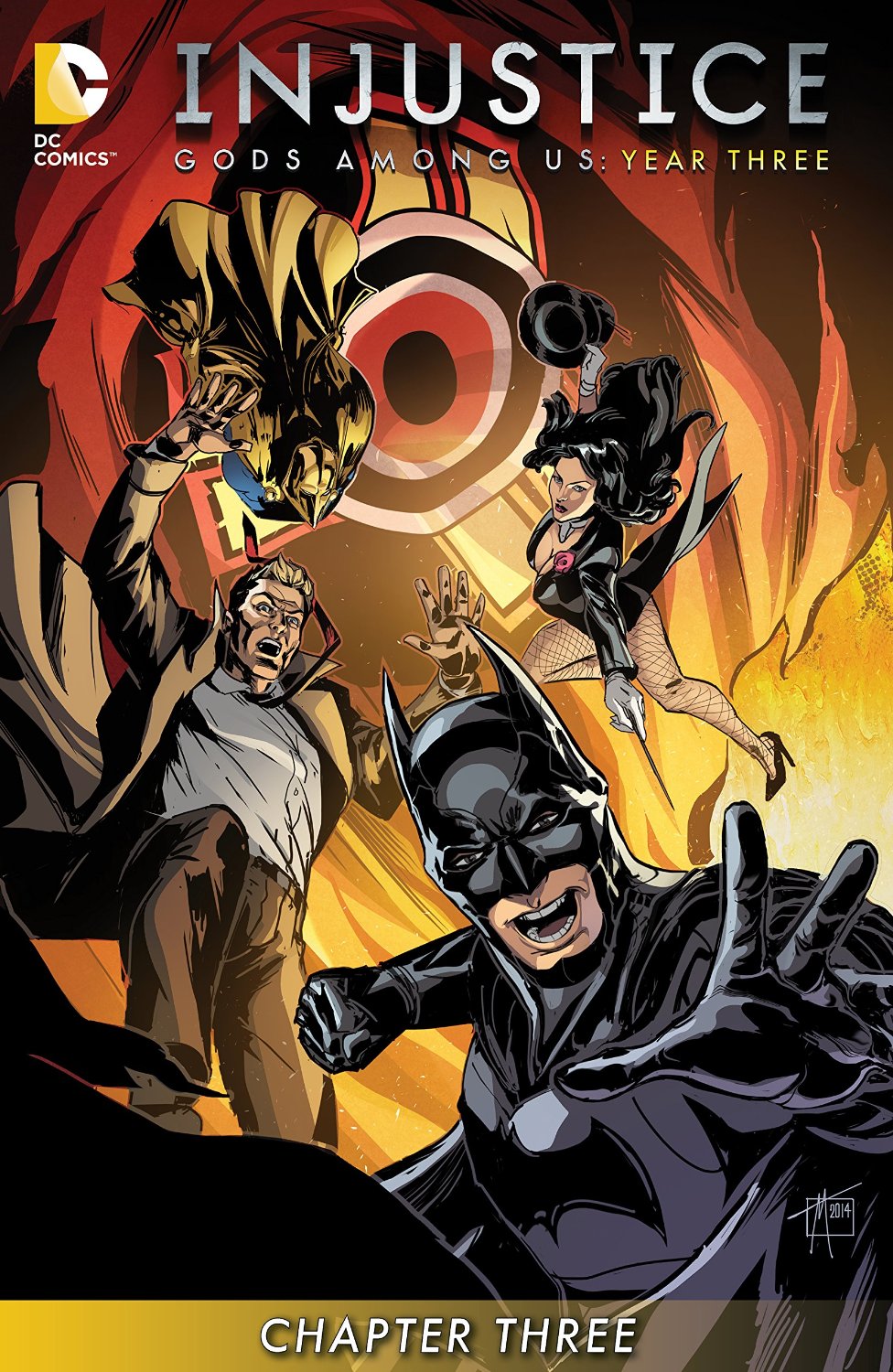 Click to enlarge
Regime Superman interrogates one of the attack force that besieged the Hall of Justice. While the attacker contends that he knows nothing, Sinestro intends to torture him nonetheless. Harley Quinn pours her heart out to a restrained Flash, but is summoned by Zatanna to join with Doctor Fate and others in conference. Constantine leads the discussion of what's to be done about Regime Superman, while the likes of Klarion, Jason Blood, and Harvey Bullock listen in. Bullock wisely wants out of the discussion, as he's not used to this scenario, but Detective Chimp invokes Commissioner Gordon's memory to have him remain. Unfortunately, Harvey left the door open as he was about to leave, giving ingress to the raging force that Fate and Constantine could only sense. In an opening salvo, the spirit of vengeance slays both Bullock and Jason Blood. The Tower of Fate must now contend with God's wrath, in the form of, The Spectre.

Story - 4: If the Spectre is on the side of Regime Superman, this universe is really out of sorts. It would necessitate a change in the title from Injustice: Gods Among Us to Injustice: God is Us... and you lot are scat out of luck. Support in the form of the Spectre is a game over scenario, one way or the other. If he's on Regime's side, the events from Day of Vengeance are a clear reminder of what magic means to the Spectre. Nothing. If he's against Regime, DC Comics Presents #29 shows even more clearly that Superman can do anything... but not against the Spectre. There is a certain amount of confidence that one has to have in a writer to believe that he can pull off what needs to be done with this scenario, and this reviewer doesn't possess that sort of trust in Taylor. Year Two saw a dragged storyline where beings of immense power were beaten (Ganthet, Mogo) because of a stupidity that was induced by the plot that required them to be as moronic as they were.

I have to admit a certain partiality to this initial storyline, as it's using some of my favorite characters. Detective Chimp, a proper detective, like the Batman used to be; Constantine, cheeky, irreverent, just a bloody scamp; The Spectre, the spirit of God's Vengeance is an interesting concept, with Jim Corrigan and Crispus Allen being the best incarnations. Perhaps The Radiant will also appear, and that will help to balance things out, but at this juncture, it's anyone's guess.

Cover Art - 3: Much too heroical for the themes within.