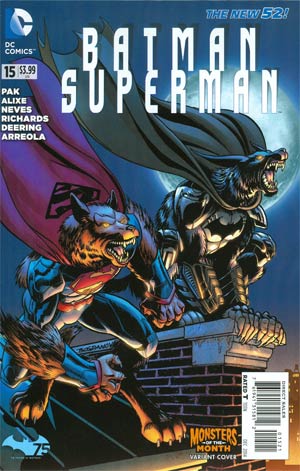 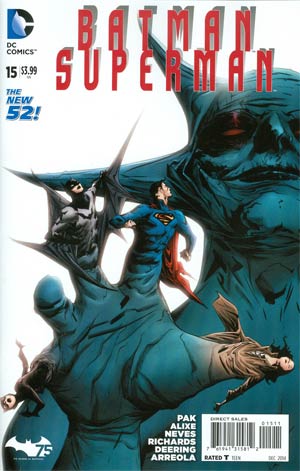 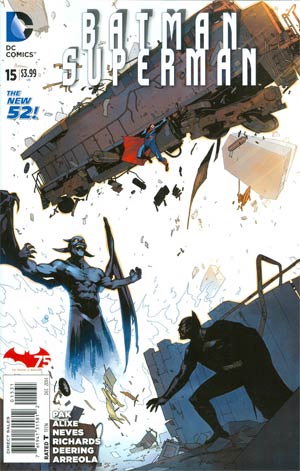 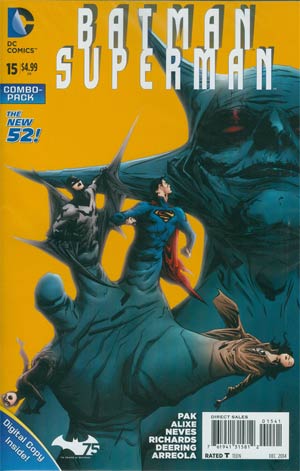 Part three of this story starts with Lord Satanus and Kaiyo bantering. Through their conversation, we find out how Superman and Batman can get back their memories. All they have to do is 'want' to remember.

On Earth, Batman pays Lois Lane a visit at her hotel. He noticed that she's good in a fight, and he decides that he needs her help to capture Scarecrow. Lois is more than willing to help The Batman. After all, working with Batman would make for a great story.

But first, Lois has to prove herself, and Batman has her suit up in the Batgirl costume. She looks good. On top of that, with the sulky Batman gone, Lois finds herself attracted to the more optimistic (and flirty) Batman. As they joust, the chemistry builds between them.

Enter Superman and Catwoman. Superman and his quickly assembled army are destroying Mangubat's robots, Superman is obviously in command as he issues orders to the soldiers following him. They quickly find Ralph Mangubat who is being beaten alive because the police now see him as a cop-killer.

Batman and Lois Lane come in to save Mangubat. But it becomes apparent that they are both unable to take on the police, Superman and Mangubat. They are good, but neither have the training or experience needed to take on such situations.

And Lois gets hurt.

This makes Superman very unhappy, and he intends to kill Mangubat.

Before he can end the villain, both Batman and Superman regain their memories. Batman returns to his sulky, controlled self and Superman returns Mangubat to the proper authorities to be lawfully prosecuted for his crimes.

Story - 3: The Good: I liked seeing Lois in the Batgirl costume. It was unexpected and fun. I also liked the chemistry between Batman and Lois. Don't get me wrong, I'm a total Clois fan. However, Lois is going to be attracted to any strong, moral man. It's who she is. And remember, attraction doesn't always equal love. So, I can handle a short Bruce/Lois romance.

I like that Lois Lane saves Mangubat. That too is in her character. She knows he's a bad guy, but he still deserves a fair trail.

At the end, Batman and Alfred's emotional exchange was so poignant, my heart broke a little for Alfred as he realized that Bruce had regained his memories.

The Bad: I'm not sure what Satanus and Kaiyo's motivation is for torturing our superheroes. Do they just like being bad? Or are they bent on world domination? Why are they doing what they do? Being bad for the sake of being bad is boring.

The idea that Superman and Batman have to 'choose' to regain their memories is an easy out for the writers. I would have hoped for something a little more creative from them.

Enough with the Batman/Bruce smile. We get it. He's happy now that he doesn't remember his past. But you don't have to have him grinning in every panel.

Superman puts his shirt on.

Conclusion: It was a good story, but the ending was a little too predictable.

Art - 5: I love the inside art. Bruce's body language as he talks to Lois is very telling. In the beginning panels, he's obviously out to do good, but he's unsure of himself. He's not comfortable as the Batman.

The pages that show Batman and Superman getting their memories back are awesome. The artwork is well drawn and emotional.

I did have an issue with the different art styles. It's a little jarring when you turn the page and go from one artist's work to the next, They are all so different.

Cover Art - 4: I like the cover. Satanus is not my favorite villain, and I don't usually like art work of him, but I like the show of Lois, Batman, Catwoman, and Superman jutting out of his fingers. It shows that Satanus is in control of the whole situation. Even in the end, when he leaves the story, he mentions that his plans have not come to full fruition.

Satanus isn't finished with our heroes. Not by a long shot.