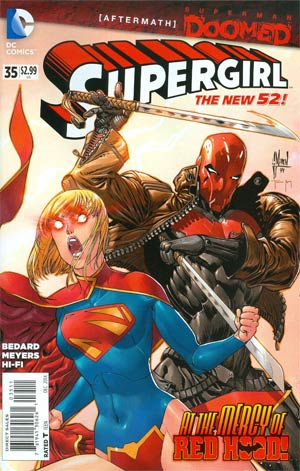 Click to enlarge
In the aftermath of "Superman: Doomed", Kara Zor-El flies the parents of Michael Harris from Metropolis to Queens, New York by carrying their car. Upon their arrival, they discover Michael's dog Scout is not with him, but someone else is. It's Jason Todd, better known as the Red Hood. What does he want, and what's he done to Scout? Supergirl has every intention of finding out.

With Scout locked in the bathroom, Supergirl takes Red Hood on a flight through the city to keep the Harrises safe. He fires green bullets at her from a gun he found being sold by alien arms dealers. The Maid of Might also discovers a strength enhancing chemical inside Jason Todd's body. Her concerns must wait, for a street gang is about to purchase weapons from an extraterrestrial. Both buyers and seller are about to get the surprise of their lives when they meet up with Red Hood and Supergirl.

Jason has used Kara as a decoy after their investigation leads them to Brooklyn. However, that doesn't stop her from dealing with the gang while Red Hood confronts a multi-tentacled gun runner from the Frellian Syndicate. Seeing the former Robin in trouble, the Maid of Might spins at super speed, buying Jason the time he needs to deal with the arms dealer. The battle is won, but Kara Zor-El still cannot help but wonder what Jason Todd has put in his body. However that will have to wait for another day as Red Hood disappears into the night.

Kara has replaced the window in the Harris' home that she and Red Hood had broken. She then spends some time alone with Michael. The pair talk and kiss while Red Hood looks on secretly with approval of Kara's search for a normal life.

Story - 5: The last couple of issues (I'm including the"Future's End" one-shot in that phrase) of this series felt like Tony Bedard was a bit off his game, but this one seems like the title has returned to its normal quality storytelling. It's hard to find anything wrong with this book from a writing standpoint. I loved everything about Bedard's tale from the team-up with Red Hood to the return of my favorite character, Michael. This issue had everything a comic fan like myself can sincerely enjoy. Bedard gives off the atmosphere that's a mixture of a buddy cop film from the 1980s and the best of such titles as the old World's Finest that showed the families of both the Dark Knight and the Man of Steel working together to fight crime. That's just some of the many reasons why Supergirl #35 is so entertaining.

Art - 1: I normally don't like giving such a poor rating, but the art just didn't work for me. It looks rushed and poorly drawn.

Cover Art - 5: The cover, unlike the interior art, was nicely done. It reminded me a bit of Salvador Larocca's style. I hope to see Guilem March's work in more DC books in the future.