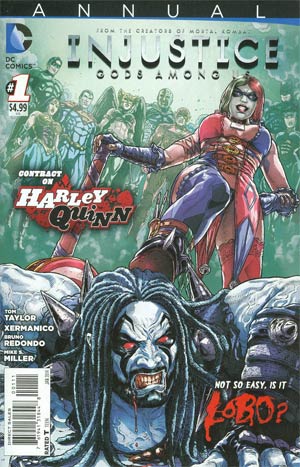 Injustice: Gods Among Us - Annual #1

"The Hunt for Harley"

Click to enlarge
The story opens to Lobo fighting off outstretched hands, which are revealed to be replicas of himself. It turns out that the action is in Lobo's mind, as in reality he's secured to a floor and about to be treated to a therapy session as only Harley Quinn can provide. After a flashback to an "earlier" time, we see Lobo has attacking the Justice League Watchtower for no damn good reason. He says as much when Regime Superman questions him. Then he tells Regime Superman that a bounty is on his head, and is trying to decide whether or not it's worth the trouble collecting it. Superman decides to ignore Lobo, but the Main Man throws a building at him. Superman responds by flying Lobo to the sun and back, explaining that while Lobo can regenerate from even a single drop of blood, there wouldn't be anything should he drop Lobo into the sun. Lobo decides to decline the bounty, but Superman offers him another: find Harley Quinn and bring her to him. Before accepting Lobo demands one of the super-pills from Lex Luthor, who just happens along with one. Lobo quickly finds and secures Harley Quinn, but she gains her release just as quickly, and helps herself to the super-pill. Harley steals Lobo's motorbike, and crashes in on Green Arrow and Black Canary. Together they defeat Lobo and then we return to the present. Harley convinces Lobo to go after a better target than her, and he decides to go after the one who gave him the hit on Superman, Darkseid.

Story - 1: This was just bad. Injustice, like the New 52, wants to have it both ways. The reader has characters thrust into their midst, with little or no explanation of who that character is, so it's left to a default or proxy understanding, which most readers have about comic characters, as they've been in use for 30-75 years. However, we then have that default understanding challenged with a recognizable character doing things that are contrary to his established core. When Lobo was first introduced, he wasn't the parody that most readers are familiar with. He was more sinister and less a tongue-in-cheek jab at Wolverine. The retcon of his origin changed him from a Velorpian whose race had been exterminated, to a Czarnian who exterminated his own race. However, the latter is the character that readers are most familiar with. The Lobo who has beat Superman, and can regenerate better than Wolverine. In this annual, he's not that character. He's not a parody. He's the butt of a foul joke.

Art - 4: Great, but can we decide on how Superman's outfit is going to look?

Cover Art - 4: A perfect rendering of the mess between the covers.