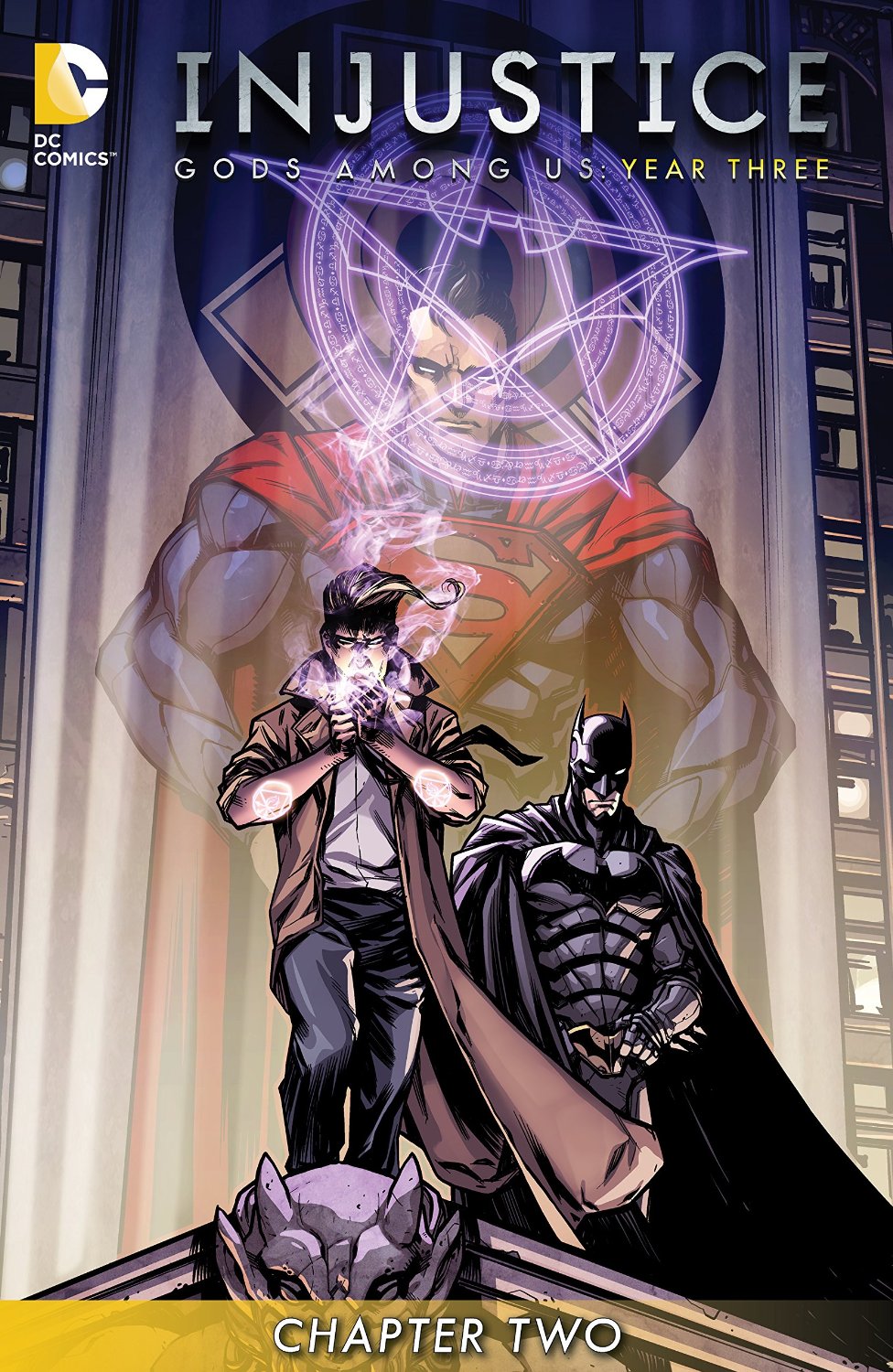 Click to enlarge
In Hell, Constantine has a dialogue with Trigon regarding his daughter, Raven. Constantine believes he knows what has happened to Raven, and seeks to barter with Trigon over the portion of his soul that now belongs to Trigon. Elsewhere, Superman, Green Lantern, and Sinestro begin the search for the missing Justice League, but Superman realizes that the lack of any trace to follow, must mean the involvement of magic. The scene changes to the Batman awaiting Constantine, and along with Detective Chimp, Batman leads them to Raven, who has been immobilized as a pre-emptive strike he needs help and asks Zatanna to send him to the greatest detective in the world. Zatanna gives a mild protest, but acquiesces to Constantine, who is sent to see none other that Detective Chimp.

Story - 3: "I'm gonna kick the man of steel in the bollocks," and break his foot in the attempt. Bring it on! Constantine's declaration rings hollow in the face of what Regime Superman has achieved in this series, and if you've forgotten, here's a reminder:

- Defeated all the parademons single-handedly

- Pushed Mogo into the sun

That's the resume that Constantine is up against. Regime isn't your run of the mill demon, man. He's a god gone mad! Do you not understand? He's not the wimpy Superman of 2010. He doesn't rescue cats from trees, and he's got no time for compassion and sentiment. His wife is dead! His unborn child as well! By his own hand! Do you not understand? This bloke will kill you and anyone else that gets in his way. Regime Superman kills people. Kick him in the bollocks, he's gonna kick your bleeding head off! Just ask the Batman. He's had his back broken and is doped up on pain killers. He's reduced to hiding in the shadows and riding in the back of a car with Detective Chimp. Grim Avenger of the Night, indeed. Better yet, ask Ganthet, Black Canary or Green Arrow. What? That's right, you can't, they're dead! What are you gonna do, Constantine? What are you gonna do when Regime Superman sets his sights on you? Get ready for a millennia of torment, man. It's gonna hurt real bad.

The Injustice set-up at this point is to give Regime an antagonist that ostensibly seems to be a credible threat, but come one. After all that's happened, does anyone really believe that Constantine can pose any true threat to Regime? If this was Superman, the paragon of virtue and morality, Constantine might have a shot. However, it's pretty clear that Regime is willing to do whatever he has to when it comes to his objective of world domination for no damn good reason. Next year, it will probably be Team Batman armed with red solar radiation weapons. Pathetic. The irony in all of this, is that the only one who can stop Regime, is that same sentimental and compassionate wimp from 2010. That is saying a lot. Regime is the Superman that so many have champed at the bit for, and while he's more than a match for whatever the Injustice world can throw at him, he's still a piker for what he used to be: a hero.