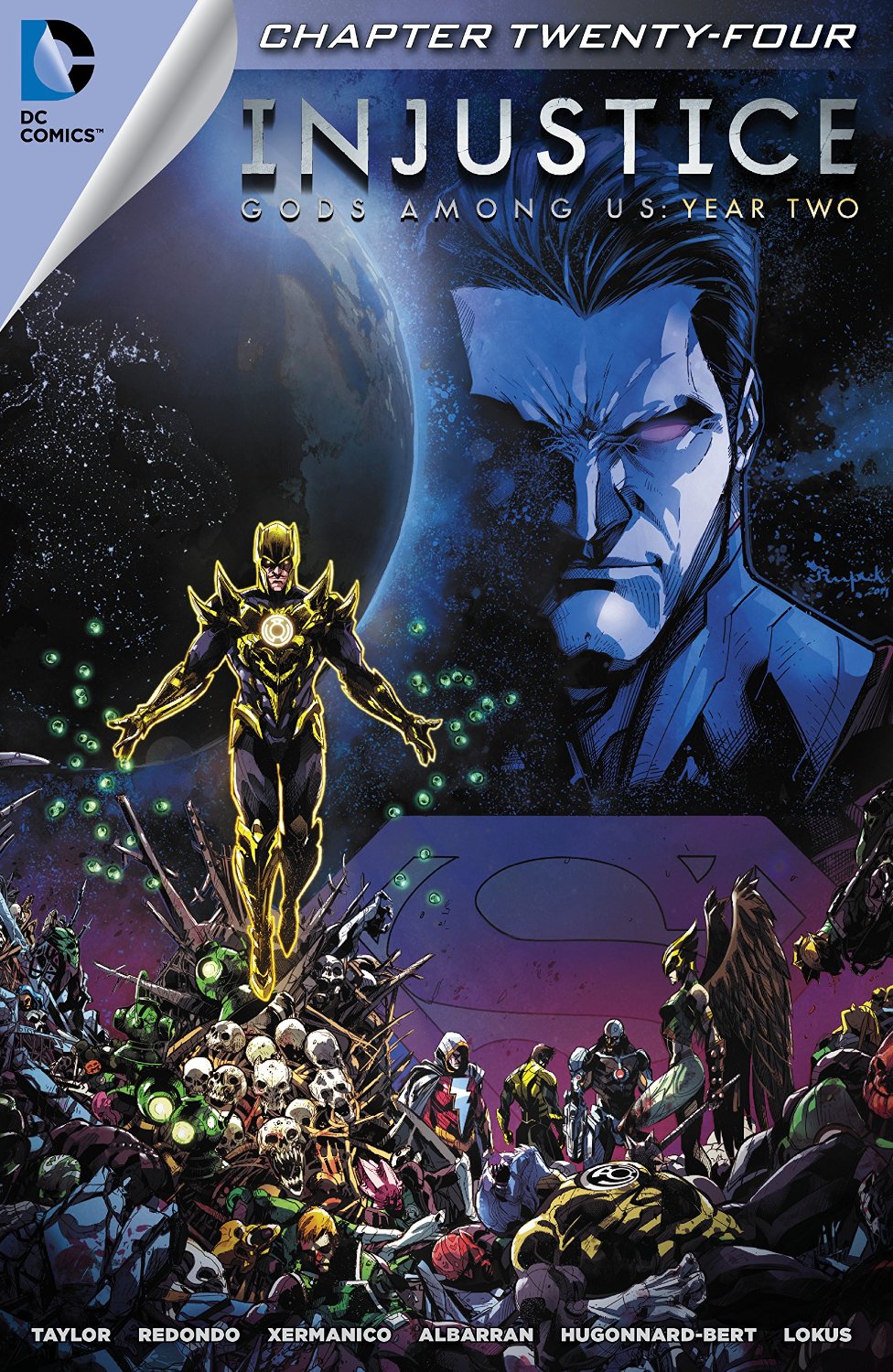 Click to enlarge
Batman witnesses the events that have transpired between Regime Superman and Black Canary, and tells Oracle to close off the transmission. The Batman realizes that with the power of a Yellow Lantern ring at his disposal, Regime Superman will be empowered by the fear of the Earth's populace. Ganthet and Regime Superman face off, and even with the power of a Guardian and Mogo against him, Regime is more than a match for the both of them. Regime pins Ganthet to Mogo, then pushes both Guardian and planet into the sun. The war is over, Sinestro has his revenge, bodies are everywhere, and it is over... at least for the Injustice players. Doctor Fate arrives at the scene of Black Canary and Regime Superman's battle, and decides on a selfish course of action. He saves Canary from her death, and takes her to another Earth where Green Arrow, Oliver Queen, is still alive. Fate leaves the two to become reacquainted and Year Two of Injustice ends on a high note of hope.

Story - 3: Year Two of Injustice lacked the presence and punch of its first offering, and much was retread ground, mimicking the events that worked well the first go around. The second year ends on a hopeful, but disappointing scene. Why does Fate decide to intervene for Black Canary, and not Regime? Canary is given the chance at happiness that has been denied Regime, and when simply thought about, having Lois Lane back would stop all of this malarkey tuit suite. However, that would stop the dysfunction that is Injustice, and the money that it's bringing with it. There really are no heroes in this series at all. Even the Marvel heroes, who fight each other for recreation, aren't this bad. The DC Universe isn't one that can sustain this type of asymmetry and imbalance for long, as its existence is predicated on heroes and heroism. Injustice may suit the need of some readers, and line the pockets of DC and the book's creators, but it's greatest disappointment is not taking the opportunity to remind readers why heroism is needed. The DC superheroes are the grandest and greatest of them all, "Gathered together from the cosmic reaches of the universe... are the most powerful forces of good ever assembled. Dedicated to Truth, Justice, and Peace, for all mankind!" Has the readership become that old and jaded, that long in the tooth that such things are no longer worthy? Injustice shows us a world with no heroes, a world of fear, hate, and stupidity, yet it fails to show why this is not a good thing. Instead it's just Boss moments and badass buffoonery. This is what some have asked for, and salivated for, a Superman who is badass and does what he wants. There's nothing weak about him and you can take Regime with you into any fanboy argument and come out a winner. There is also no reason to like Regime, and if the world has shown anything the last few months, it is that we are still very much in need of heroes, particularly in our fiction.

Black Canary receiving such a send off really irked me, as she honestly doesn't deserve it. Her rage and anger are no different than Regime's. The only difference is that she's on Batman's side, and doesn't have the power-set to become Galadriel with the One Ring. None of these heroes are better than the others. They're all disappointments. However, going into Year Three, that is something I will have to consider, and hopefully other thinking minds will as well. The Injustice world doesn't have heroes, so what exactly are they? Antiheroes? Neutral alignment NPCs? How does their world view them? Beyond the fanboy pissing match between Regime and Batman, how does this serve the DC Universe proper? An allegory? Cautionary tale? The coincidental thing is that DC needs to reboot about every five years now, and Injustice should wrap up within that time frame. We will see a return to heroism, count on it, but for the next generation of writers (who will probably be in their 60s as the average reading age goes), will they know how to present valiance in a manner that is appealing and not "nauseatingly wholesome"? Marvel has the right idea, if you've read Avengers #34.1, and it would be DC's ill-fortune that all the lads who know what to do are over there... again.

Art - 3: I understand it's a weekly book, but perhaps they can deepen the roster for next year?