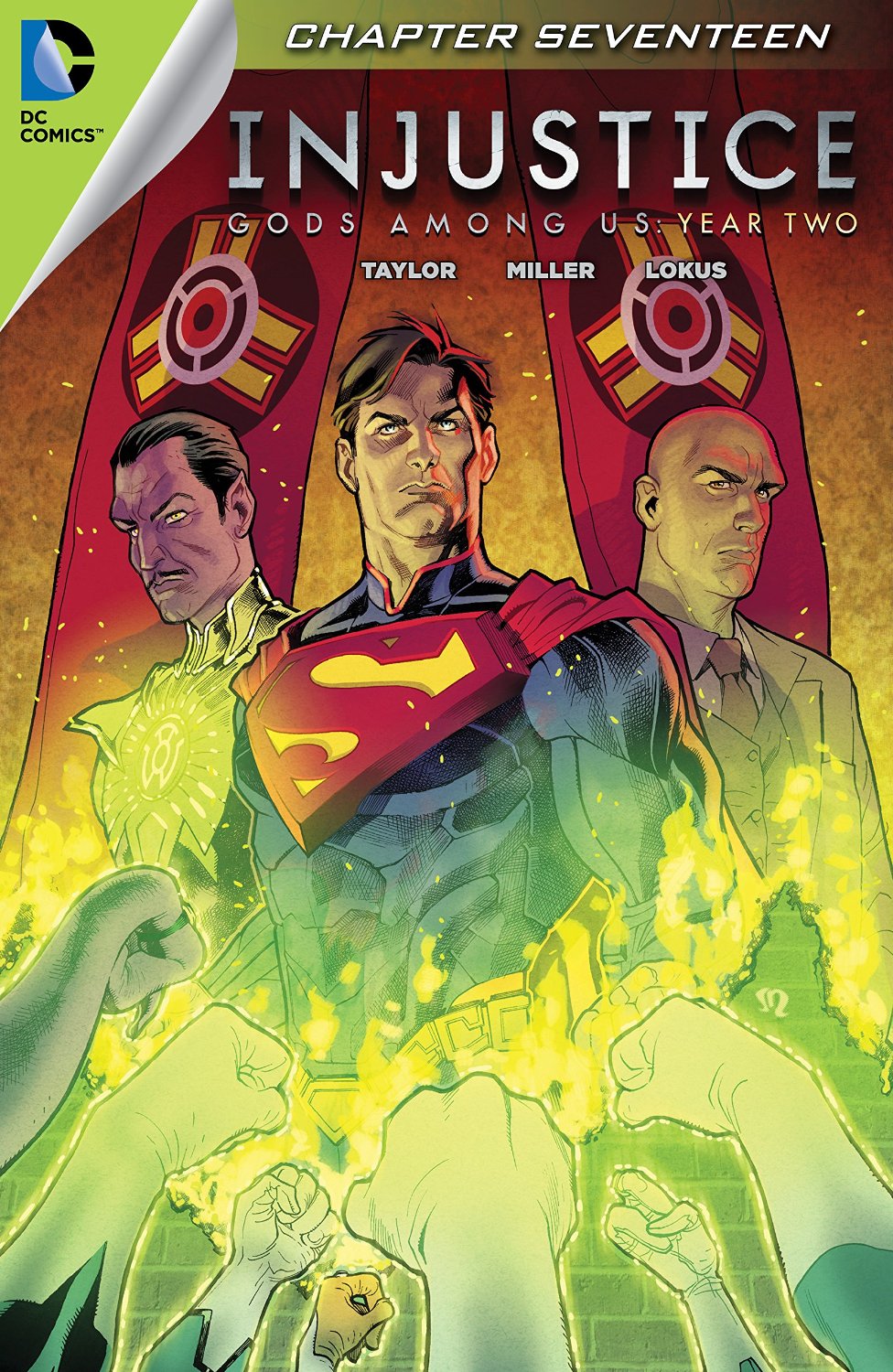 Click to enlarge
The Green Lantern Corp has arrived, and Guy Gardner seeks to parley with Regime Superman. Guy makes an impassioned plea for a peaceful resolution, but Regime Superman dismisses Guy as an embarrassment. Insulted and goaded, Guy attacks Regime Superman, who easily evades and flings Guy away from the fight. The GLC attacks, but it's just a ploy to allow Mogo a chance to attack. Mogo releases a blast of emerald energy and seemingly incinerates the Yellow Lantern Corp with Regime Superman among them. On Earth, the Batman's League is alerted by the sky turning green, that it is time to act. Batman asks Black Canary to remember the man that Regime Superman once was, but as she loads a gun with a Kryptonite bullet, she makes the Batman no promises other than to have aim that is true.

Story - 3: It's good that the GLC came with a plan, and that Mogo was a part of it. However, Mogo is acting to clean up some loose ends in the plot, namely, the YLC. They're just as much of a threat as the GLC, so Taylor takes them off the table unceremoniously. Sinestro (who is in the game) will remain, but it would be a surprise if any of the others make it. However, the same as to be applied to the GLC. They've just played their hand and it was their strongest one. Obviously, it's not going to work (See: Injustice Gods Among Us), but the GLC also have to be taken off the table, Parallax style. The universe isn't big enough for all of the players amassed here, and as we know by now, death is the only way to solve problems in this universe. The question is, if this is "Absolute Freaking Carnage," what, pray-tell, can follow it? The expectation is the Regime Superman also had a plan, but that's getting a wee ahead of things. Mogo is the one GL with the power necessary to not only defeat Superman, but "kill him dead". Should Superman survive this, which we know he will, a Kryptonite bullet has no hope. Not because it can't stop or kill Superman, but because it is so paltry in scope after surviving a nuclear blast and Mogo. It will definitely be dramatized and Canary will get close to that pound of flesh she craves, but that's about it. It's shaping up to be a repeat of year one, where Captain Atom tried to blow up Regime Superman, it didn't work and Regime started killing people spot on.

The simplest way I can tell whose going to buy it and who lives is just to look at the playable characters list for Injustice: Gods Among Us, the video game. If the name is on the list, you won't die in the years leading up to the timeline of the game. If your name isn't on it, a la Martian Manhunter or Captain Atom, be certain that you've reserved your plot and make your piece, because you're going to die. And Regime Superman is going to kill you. It will also be interesting to see how the Batman's plan fails, which we know it must, mostly because he had to keep it secret from his League, a sure fire way that Batman is wrong. Whenever the Batman is keeping secrets (Brother Eye) or making sneaky plans (Tower of Babel), things all ways tend to just blow up. Don't expect an apology.

Art - 3: The last page is the best of the issue, showing the division between Canary and Batman, who just happens to have his cowl off. Nice touch.