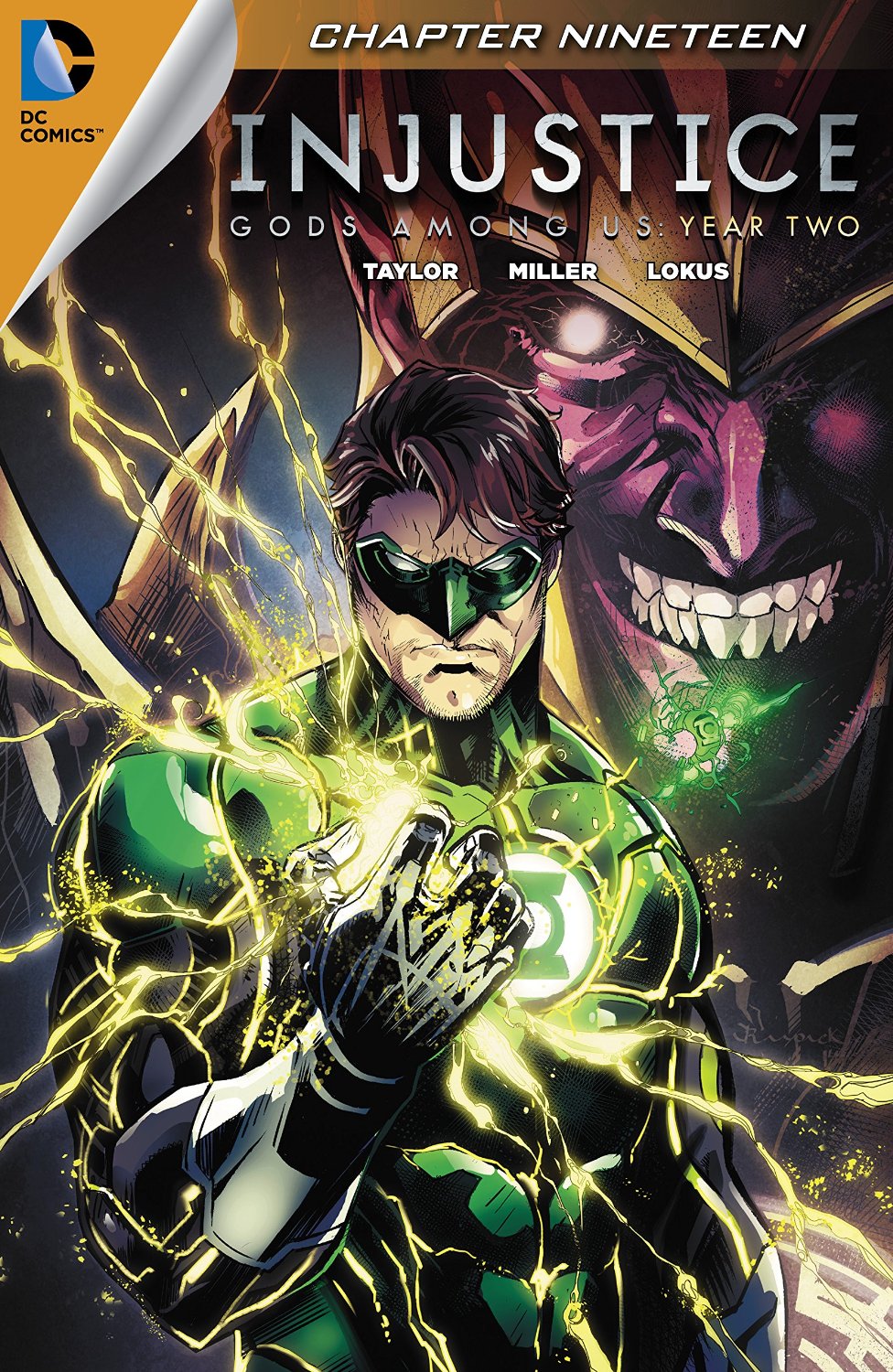 Click to enlarge
The Hall of Justice has been taken by the Insurgency. Now, the Insurgency looks to take the fight to the air, putting Batwoman and Huntress into play as they seek to commandeer planes Ferris Aircraft. Carol Ferris contacts Hal Jordan, who leaves the battle in space to assist her. Guy Gardner follows and contends with Jordan, but they were both followed by Sinestro and members of his corp. Sinestro looks to kill Gardner, but Ganthet appears and dismisses them all with a wave of his hand. Hal continues to fight with Guy, but Ganthet finally takes Hal's ring away, but while Hal is high above the ground. Hal begs Sinestro to save Carol, but Sinestro offers Hal a yellow ring with which to do so himself. Hal accepts the ring, saves Carol, and becomes a default member of the Yellow Lantern Corp, ready to dish out a healthy amount of fear.

Story - 4: One of the quandaries of Injustice is how Regime Superman could progress as far as he does, without a healthy amount of pushback from other heroes. One way to sort this out has been to make the resistance comprised of lower tier, lower powered heroes dependent on super-pills. In that manner, the Insurgency doesn't have the raw power to contest Regime Superman and the Justice League directly. However, it still begs the question of the super-power heroes, i.e., why do Flash, Green Lantern, Captain Marvel, Hawkgirl, etc., why do they fall in line with someone rushing at 100KPH to be the world's greatest despot? This installment gives a plausible reason: they're all jacked in some form or other. Common sense doesn't work in the Injustice universe, or any thought process aside of tawdry platitudes and no-win scenarios. When Ganthet finally shows himself and does what he could have done long ago, one has to ask why now? Why is Hal Jordan deprived of the ring, now? Why does Ganthet mindlessly destroy a plane, when he could have easily disabled it safely? The answers, of course, are given in the redundant plot, which is reminiscent of how Lois Lane was killed. If these things don't happen, how else can we get to the Injustice of the video game, and gods among us, help us, this is only year two.

Common sense aside, it was entertaining. Hal joining Sinestro was a nice flash moment, and Ganthet being there ups the ante for a back-breaking finish like we were given last year. The longer this story goes on, the less sense it makes, and that's more because of the task it has of connecting to a preordained future, than my criticisms of it. It's obvious that in the Injustice world, all of the heroes are defective in some fashion or other; the living ones at least. The heroes that resemble those of yore tend to end up dead, thereby allowing the situation to escalate further and farther. If Earth 3 is the universe of evil Superman, evil from bottom to top, then the Injustice universe is that of heroes who are unbalanced and dysfunctional. Hardly hero material. But definitely lads to get you munching the popcorn.

Art - 4: Miller's linework is refreshing after a long and steady hand by Redondo. He definitely has an eye for the female faces, where his hand is the most precise, but a strong hand overall, nonetheless.

Cover Art - 4: Othello and Iago. The cover is reminiscent of a poster I saw for the Shakespearian drama, and it plays well with the events of this issue.