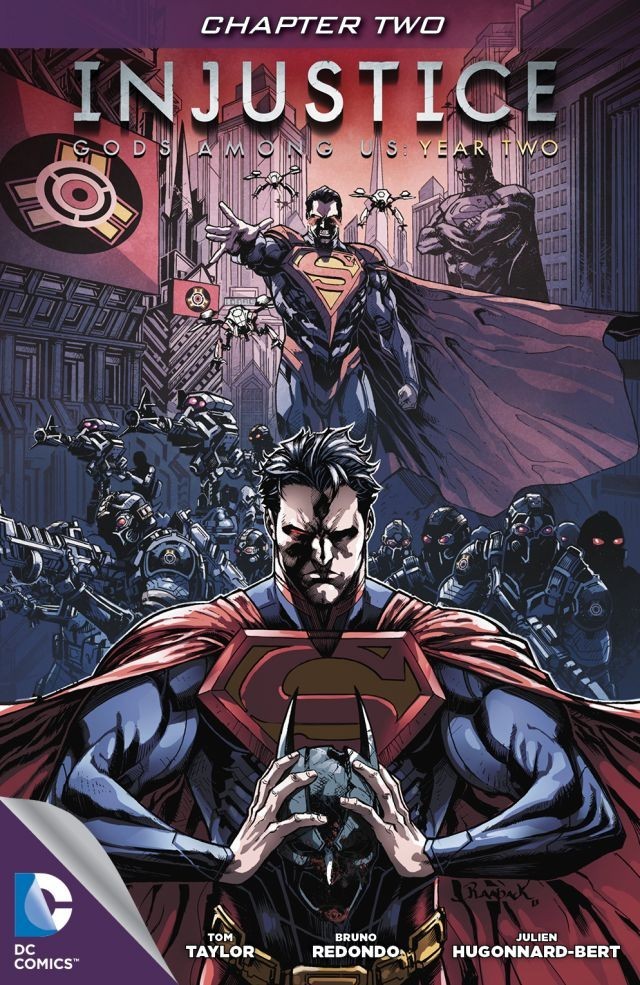 Click to enlarge
Kyle Rayner is returning to Earth after being away on a year long mission, saving worlds and defeating evil. He's intercepted by Sinestro and other members of the Yellow Lantern Corp. Sinestro has decided that Kyle and any other Green Lantern needs to stay out of what's happening on Earth. In Gotham City, Commissioner Gordon is surprised to see the Bat-Signal on, and even more surprised to see Superman waiting for him with questions as to Batman's whereabouts. Gordon gives up nothing, and Superman leaves, though before letting Gordon know that he has wide-spread lung cancer. The Tower of Fate has a new resident, as Alfred and Zatanna have taken the Batman there to convalesce from his injuries sustained from Superman. Zatanna lets Batman know that he's safe, though Superman is looking for him, having put Raven on his trail. When we return to Kyle Rayner, Sinestro has removed both his ring and finger from his hand, and then has him drawn and quartered.

Story - 2: Green Lantern, Hal Jordan, John Stewart, et.al., are not my metier. I am confident that there is someone, if not whole legions of fans who know the aspects of the power ring, and the personalities of the ring-bearers better than myself. However, with the smattering of knowledge that I do possess, it's very hard to swallow the story that Taylor sets before his audience in this installment. In terms of intent and effect, the offering presented in Injustice: Gods Among Us is perforated in too many ways to forgive. Kyle Rayner's interaction with Sinestro, Superman's with Commissioner Gordon, Batman being in the Tower of Fate - no of it reads very well or has the authenticity that it should at this point.

The fact that Superman is searching for Batman reminds readers that he could have killed The Dark Knight when he chose to break his back instead. In all honesty, he should have killed him, rather than break his back, especially if he's that worried about him, that he has Raven "searching the realms" to find him. Superman's kill list if pretty full at this point, and he's slain others, Green Arrow most notably, who posed less of a threat, if any threat at all, than the Batman. It's a major plot hole, due to Taylor's writing and what has to happen in the video game. It's also another reminder of the steps that have to be taken to keep Batman alive and viable to stay on the same footing as the gods. It's still not feasible that Superman hasn't caught up with Batman as of yet. Raven, Captain Marvel, and Wonder Woman are in his corner, so there're enough magic users for him to at least know where Bruce Wayne is, if not make an all out assault against Fate's Tower. It would be interesting to see Batman under siege and constantly on the run, but that's neither here nor there. Superman's dialogue with Commissioner Gordon is laughable, as you know that Gordon isn't going to give up Batman, at least not this way. It comes across as so petty and ridiculous. The position that Superman has would allow him to pressure Gordon with termination of his position, frozen bank account, seized property, even imprisonment, but instead we're treated to the trite, glowering Man of Steel, who callously informs Gordon of his cancer after, after not getting his way. It almost feels that Superman gives Gordon the disease in reprisal, if such a thing were possible.

The worst of the lot is what is done with Kyle Rayner. Not because he's killed, not because he's humiliated, and not because of the insult to injury that's added his death from decompression. It's the fact that Kyle is still wearing the ring, and does absolutely nothing. He just allows himself to be dismembered and dies. Green Lanterns are supposed to not only be fearless, but to possess a superior amount of will power in order to manipulate their rings. Kyle doesn't seem to know how to use his until Sinestro rips his digit away. Intent? Effect? I really don't know, unless the idea was to make a reader feel like that 100 cakes of soap will never wash this blight off of their hands. These characters deserve better and Taylor, who has shown the capability, needs to do better.