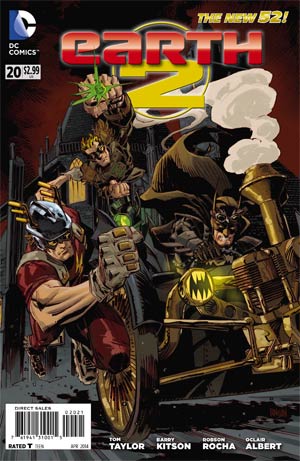 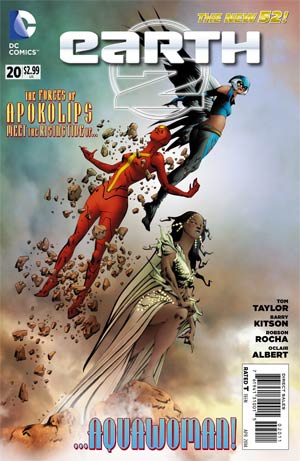 Scheduled to arrive in stores: February 5, 2013

Click to enlarge
On the strength and speed of Hawkgirl, the budding resistance of Earth 2 tries to escape the horde of parademons in hot pursuit of them. Batman surprisingly states that he can no longer support Sato, but Aquawoman releases herself, and then summons water from the clouds, drowning the parademons in mid-air. Aquawoman then takes her leave, gifting the Batman with a shell that can summon her when he needs to. The Batcave plays host to the aforementioned, in addition to Red Tornado, Jimmy Olsen, Connor Hawke, Dr Fate, and Val, a newly discovered Kryptonian. Batman discovers that Val is agoraphobic, and loses his temper, causing Val to freak out even more. Red Tornado, who is now inhabited by the "essence" of Lois Lane, talks to Val and calms him, eventually convincing him to go into the sun, where he will find literal and symbolical strength. Above ground, Brutaal continues to destroy well known landmarks, to establish that there is only one god, and Darkseid is his name.

Story - 3: When Batman says, "We may not have time for this," it's almost as if he's talking to the reader. This installment reads very much like an interlude, with very little movement of the plot occurring. Actually, there's no movement of the plot at all. Batman and company are on the run, still; Brutaal is destroying things, still, and the world is still at war. The strength of the issue rests with the interaction between Val and Red Tornado, where her calmness regarding Superman's conversion to Brutaal, and the destruction that he's causing is almost... robotic. Her words are very soothing, and we've heard them before - at least, you've heard them before if you watch any season of Smallville.

Val (wouldn't it be a kick if he was from the House of El? Val-El?!) is free for the first time in what we can only imagine, and his freedom is nearly destroying him. Still, he's a Kryptonian with a certain innate goodness that seems familiar. He doesn't want to fight, but he faces his fears to step into the light, which the world desperately needs him to do. It's poetically executed and, if not for the destruction that is occurring while this moment of poesy is in motion, it would be an absolutely beautiful scene, one that has been absent from Superman comics since the onset of the New 52. Batman's limitations are a surprise unless one has perused the Earth 2 Annual, where it's detailed who he is and how he's able to take gunshots to the head. It doesn't explain, however, his tactical and deductive abilities, which is part of the larger problem with Earth 2 overall: the slippery holes in the plot, which the series originated with. Robinson had a tighter hand, but there seems to be an assumption that readers don't care if the sequence of events are accurate or sensible, so long as they're entertained.

In Earth 2 #1, Superman, Batman, and Wonder Woman make the ultimate sacrifice to end the war against Apokolips. That sequence itself was faulty, as none of them needed to die. If Superman or Wonder Woman had gone in place of Batman, we'd have a totally different world than what we're seeing now. When the tubes to Apokolips were closed, it was supposed to be for good. That makes the advent of Brutaal improbable, as Steppenwolfe couldn't have had any communique with Apokolips, let alone gather reinforcements. When we last saw Hawkgirl, she was investigating a lead; now she knows the location of the Batcave, and was also able to save Connor Hawke and Dr Fate... and then get back in time to save Batman and his lot. Trivial? Nit-pick? The question is how many nits have to occur before calling them out is a valid criticism, and does being entertained mean lowering the IQ to do so. There's a lot of entertainment to be had in Earth 2, make no mistake about it, but there's also the constant reminder, if the story has been followed from its inception, than none of it should be happening at all.

"The Dark Age" and Forever Evil are in stiff competition from the most entertaining tales of the year, that have been dragged out far too long. I understand what's happening, as do regular readers. We've seen the destruction. We've Superman evil once more (and there needs to be a stiff moratorium on that). We've ridden the crest of rising action, but it's time to hit the apex and descend. The story needs to be told and everyone, for better or worse, needs to move on.

Art - 3: Scott was off this issue and it showed. That's no slight to Kitson, but Scott draws a much better Aquawoman, and up to this point, Aquawoman has been the best rendered character, after Brutaal.

Cover Art - 2: This was a big miss for Jae Lee, who can usually render some pretty compelling, if eerie, covers.