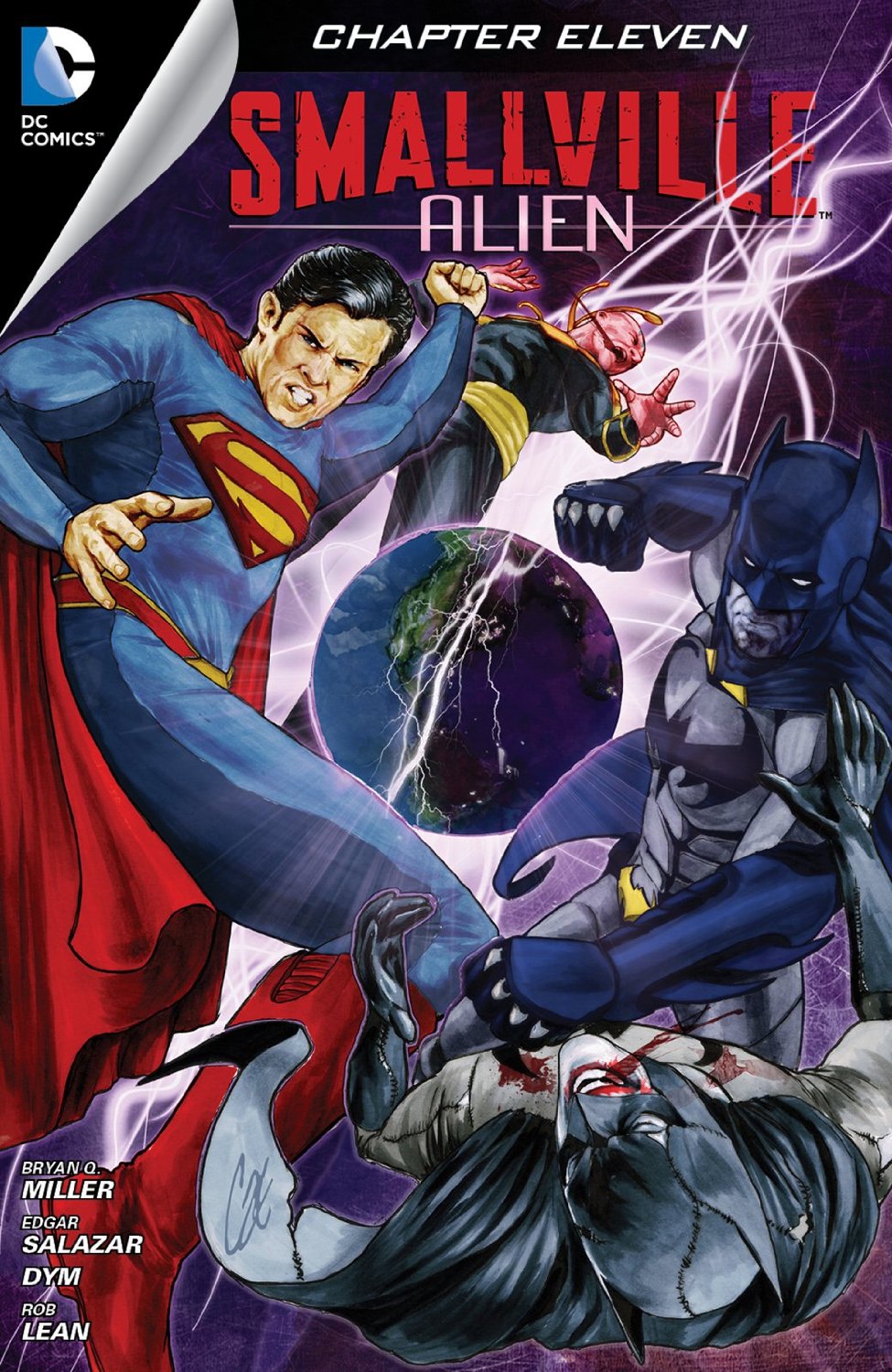 Click to enlarge
Batman dukes it out with his doppelgänger, with some help front Nightwing. The Batman-Joker hybrid from the alternate earth reveals he killed the Barbara Gordon of his universe (she happened to be in a wheelchair) and both of his parents. The evil double tells Batman he should just finish him off rather than send him to Arkham Asylum, which would prove problematic since he'd be identified as Bruce Wayne. However, Batman tells him he doesn't kill and cuffs him.

While in Russia, Lex Luthor watches helplessly as the Monitor prepares for the final destruction of earth. However, Superman arrives in time to take the Monitor down and disable the technology he's wearing. Lex tells Superman to kill him, otherwise more like him will come. Superman disagrees, insisting that killing the Monitor won't solve anything. He adds, "That's not my style."

Superman then flies toward the Monitor's ship and destroys it from the inside. The ship crashes near Lex and the Monitor, and Lex is rescued from the devastation by Otis in Red Rocket Brigade armor. Superman surveys the wreckage and finds the Monitor impaled on a rod. He closes the dead being's eyes and says, "I'm sorry."

Story - 4: Well, we finally got a bit of explanation about why the Monitors do what they do. It wasn't much, and I won't pretend to be completely satisfied with it, but it's something.

During the confrontation between Lex, the Monitor, and Superman, the Monitor insists he and his comrades can't be stopped. "We are entropy!" he says.

It isn't much, but it offers some possibilities. I like ambiguity in situations like this, so I'm inclined to like it. I just really wish we'd been told this sooner. Herein lies the challenge of releasing stories one piece at a time. Odds are, if I read this entire story in one sitting, I never would've felt any frustration. But alas...

I may be reading too much into this single bit of dialogue. I may just be desperate for the explanation I've been demanding. But I'm clinging to it, and that's that.

This suggests the Monitors are an inter-dimensional version of Marvel's Galactus. They travel from universe to universe, destroying them for one simple reason: They're supposed to. Galactus has a pragmatic reason, of course - hunger - but it's been implied he destroys planets in order to fulfill a higher purpose, one that we're never made privy to. Perhaps the same is true of the Monitors. They may be destroying various earths simply because they are compelled - or programmed - to do so. Why? It's just what they do.

I like this as a reason. Again, I just wish we could've found out sooner.

I'm still giving this a four, though, because the story remains compelling and entertaining. I'm curious where things go from here, and I can't help wondering if the Batman-Joker hybrid and his earth's Clark Kent are just accidental travelers like Bruce's doppelgänger said or if there's more to their presence.

Art - 4: Kudos on the Batman-Joker hybrid's look. It's a nice nod to Heath Ledger's Joker, whose attire looked more like something cobbled together at a Goodwill Store rather than a movie studio. The stitches all over the suit make it look like this earth's Bruce Wayne patched his costume together from rags.

The idea of a genuinely evil and sadistic Batman, one who would even kill his own parents, is actually a pretty terrifying notion, one I don't think has been explored before. Given a full range of resources, what would this Batman-Joker hybrid be capable of? Salazar captures that terrifying notion in this character's design very well. The stitched-together costume, the face paint, the circus ringmaster-like movements, all make this a very uniquely creepy Batman.