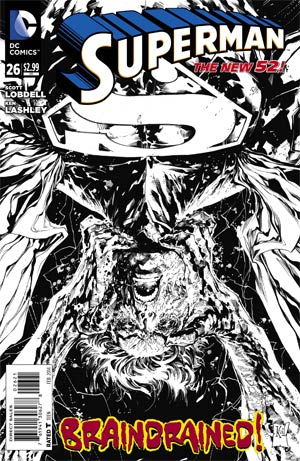 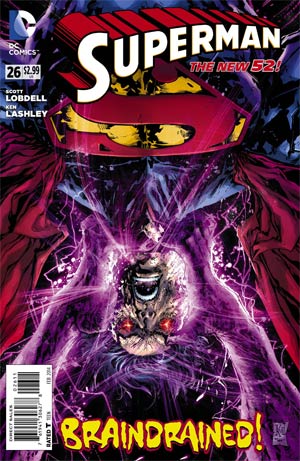 Click to enlarge
Clark and Diana are finishing dinner in a rare moment of peace when an astral projection of Lois Lane appears in their apartment seeking help.

Diana leaves them be to combat a demon horde but notes that Clark continually makes her love him more with his acts of kindness - especially being there for his best friend after her recent sacrifice.

Lois is struggling, initially she thought her Brainiac induced powers would fade after the Psi War but instead they seem to have escalated and she is struggling to filter out every thought from all of Metropolis. Fearing madness she sought Clark out not just as her friend but because as Superman he has to deal with his own powers. Clark swears to Lois he always intended to tell her his secret and the couple share a tender moment and Clark reassures her that it will all be ok.

Elsewhere in Suicide Slum, Parasite skulking in shadows sees an ambulance pick up a patient and catching the medics unawares he drains them and follows an inexplicable urge to visit the hospital. At the same time Superman carries Lois back to her body in the very same hospital Parasite is heading for. Lois notes she could just rejoin her body but Superman out of habit carries her skyward to her room. Offering advice Clark tells Lois that his father had once told him "Do what you can" not "do everything" and that helped him to filter out the continual calls for help. Lois then sees something in hospital that cuts the conversation... Sam Lane.

Sam rarely speaks or sees his daughter and this time he is revealing his future to her. He is to step into Senator Hume's role by request of the President. He also reveals the position as Senator Lane will allow him to investigate something called 'The Tower'. Seeking to repair his relationship with his daughter he reveals how he's always been so proud of her and seeks to make her equally proud of him.

As Sam leaves Clark, now a civilian, enters. His curiosity piqued by mention of The Tower, Lois interrupts him to tell him that Sam is deeply frightened of whatever The Tower is, as a reporter he should investigate it. Clark agrees but asks about her other story - now she knows Superman's secret - will she reveal it? Lois replies, coldly that she absolutely will.

A saddened Clark is interrupted by the voice of Jonathon Carroll who says 'Superman'. He explains that when she woke temporarily during Psi War that was the name she called out. His jealousy pours out in his depressive, tired state. Clark however combats the opinion, pointing out of all the men in the world she picked him, because despite his lack of powers he is just as brave as Superman and Jonathon is the man she wants. Though as Clark leaves it's clear he doesn't believe his own words.

Parasite arrives at the hospital in the ambulance and abandons it, drawn to a power source in the hospital. Clark meanwhile, logs in back at his office of Clarkcatropolis.com and files a story on Sam Lane. He struggles with his conscience commenting that Perry would always pull him back if he pushed his journalism too far. As his own boss however he not only has to take the lead as Superman but also as a reporter now. He then uploads his story to the web.

Parasite has found his way into the morgue and drains energy from the dead but is further drawn to the upper floors where something is 'calling to him'. With each 'meal' Parasite gets bigger and more deformed.

Shay Veritas appears as a hologram on the roof of the Daily Planet, Clark as Superman arrives and realizes he should have updated their rendezvous point as it's no longer his stomping ground. Superman asks his friend about Lois' progress with healing. Veritas reveals Lois is not healing but transforming in some way into a new form.

The hospital is in a mess with the attack of the Parasite and it draws Clark back to it. Superman assumes Parasite tracked him and tries to use a chunk of flooring to block the villain as he launches out of the hospital. Parasite manages to drain some Kryptonian power and uses his newly acquired power to freeze the Man of Steel and slam him deep into the hospital basements.

Superman unfreezes himself with heat vision and then... nothing. No attack for more energy from Parasite, no fighting, nothing. It dawns on him that he isn't the only superpowered being in the hospital and flies as fast as he can to Lois only to find Parasite draining the life from her.

Story - 2: Characterizations were awful this issue.

The moments with Clark and Diana were just so poorly written - terrible interaction and dialogue. The pacing was all over the place throughout the issue with Clark heading to the office and meeting Veritas completely at the wrong story beat to read correctly with the momentum. It is obviously setting up the next 'big arc' but this issue was terribly disappointing all round. Teasing the fans with a 'lost romance' with Clark and Lois is just out of place. Lois was all over the place so maybe the writer needs to read some back issues. The Parasite, it should be noted, never touches Superman yet still gains power and now is a magnet to meta energy, a little clarity in what changed since Parasite #1 please.

Art - 3: The pencilling was exquisite in places and then in others lacked detail or seemed rushed. I appreciate timing and editing is a factor but I just wish that the dedication some pages/panels saw was uniform throughout.

It wasn't terrible by any means, just needed to have a stronger flow from panel to panel.

Cover Art - 4: The cover, also by Lashley almost seems like it is by a completely different artist. The horror aspect and attention down to the fine inking lines and digital sfx make this a brilliant piece of art.