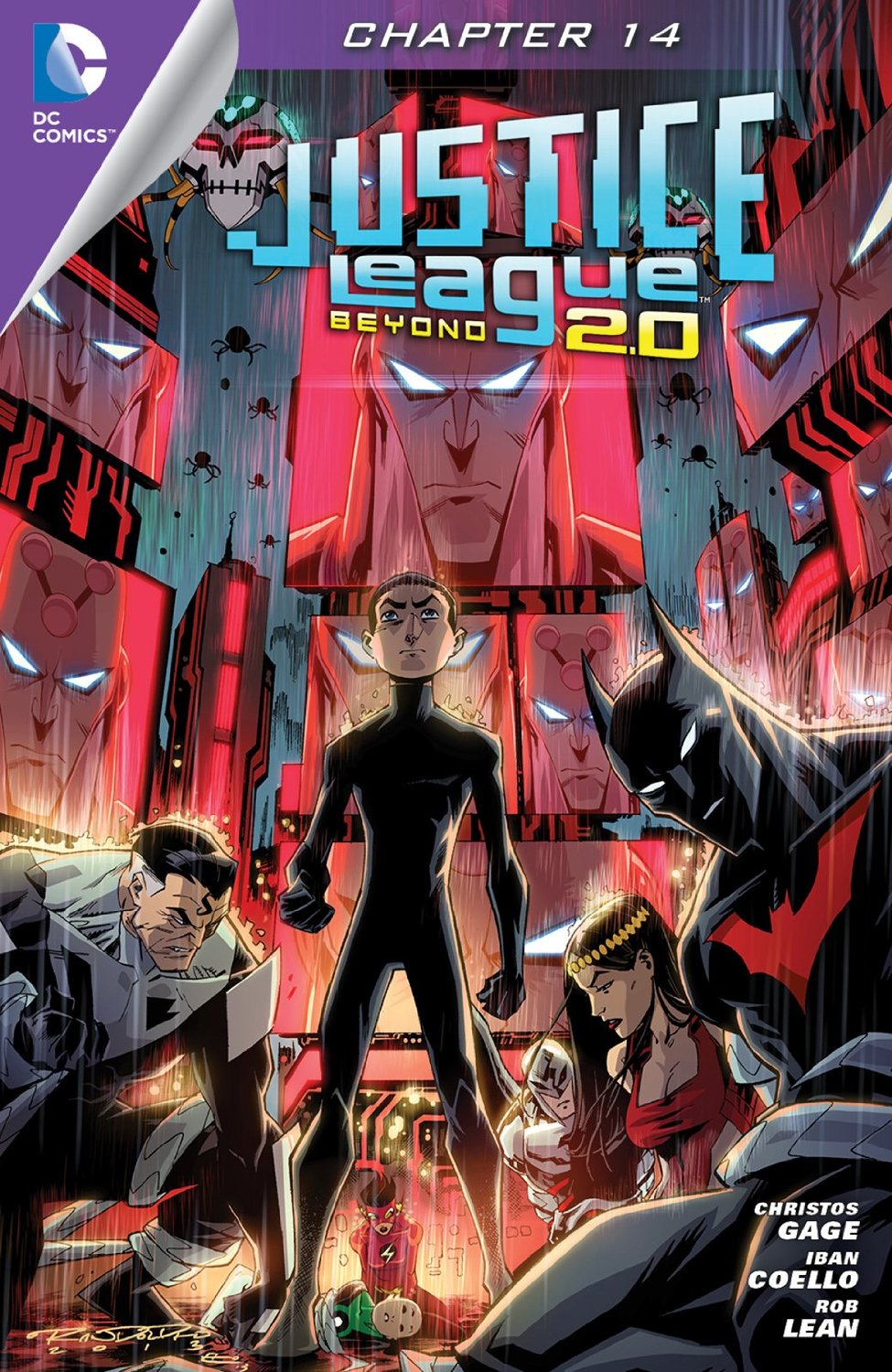 Click to enlarge
Brainiac makes for Paradise Island/Themyscira to defeat the remaining resistance that is the Justice League Beyond (JLB). Brainiac's forces are easily defeated, but both sides realize that this is just an examination: The JLB wants to see how strong their defenses are, and Brainiac needs to measure what it will take to defeat them. Superman, however, has long-range plans that involve Kryptonian crystals, a Mother Box, Klarion's sorcery, and Max Gibson's coding skills, all of which make a virus capable of disabling Brainiac. Micron and the Flash are tasked with uploading the virus into Brainiac's network, and are successful in causing Brainiac to retreat. However, instead of withdrawing to a remote zone, Brainiac amasses himself in one of his anthropomorphic constructs and takes the fight to the JLB.

Story - 4: Many, many moons ago, when this reviewer was still a lad, he came across his uncle's comic books and looked at the images. He didn't know he'd become a lifelong reader, or that he would one day have such a love of the medium, that he would take on many tasks associated with it. All he really wanted to know was what was going to happen next issue. The story was compelling enough that it kept him coming back for more, and mostly because he just couldn't put his finger on how it would be resolved. It's the hope of this reviewer that JLB 2.0 is finding it's way into the hands or, rather, tablets of lads and lasses all over the area. It's exactly the type of comic that makes one into a lifelong reader, and for the lifelong reader, it's a rewarding and refreshing display of the characters, the heroes and heroines, that make the medium what it is.

After six issues, we're no closer to how the JLB is going to move off Brainiac, and that is not a slight, but a marvelous proposition that is enough to make a reader giddy. Christos has removed nearly all of the escapes for the JLB, and done so in a logical manner befitting the villain of the story. Brainiac develops a strategy, implements it, it works, and where it doesn't, he assesses the flaw and resumes from the top. The JLB is actually doing what good heroes are supposed to be able to actualize: think on the fly, and solve the problem. It's intrinsic in DC heroes that they're supposed to be able to do this, and not let the villain dictate the outcome of the battle. We shouldn't see Superman torn between blowing up the Earth to destroy Brainiac, so that the universe can be spared, which would be a lot easier than what they're doing here. No, the JLB will fight while they think and solve the situation for the lot of us and not just the few.

The only drawback of the series comes in the form of release time and length. It will sound like a greedy schoolboy, or a petulant teenager, but damn it, more! More installments, more panels, pages, more! It would excellent to see the issues have the space and length to give further development to what it is all ready a very fine read. The brevity of the digital format makes for a fast, action-packed read, but when you see how speedily Micron and Flash's mission has to be due to space, and that we finally get a moment of characterization from Warhawk, but it can only be a moment, it's hard not to want more... and now.

It you want to turn kids on to comics, this is the right book to do it with. It you want to read a Justice League where the heroes actually do something other than bicker with each other, and don't disappear for over half a year, this is your book. Most of all, if you want to be entertained without the miasma of nonsense you have to wade through to be so, this is your book. Gage, Coello, and company are doing are fine job, and that's a very rare thing in comics these days.

Art - 4: A solid issue art-wise, and I think I've bemoaned Rob Lean's inks long-enough, as they're beginning to mesh well with what Coello serves up as penciler.

Cover Art - 4: We'll see if that cover has anything to do with next issue.