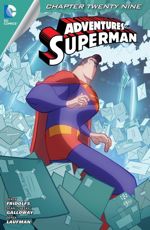 Click to enlarge
It turns out Superman gets a lot of mail. Without a mailing address though, just where can fans of the Man of Steel send their letters? The Daily Planet, of course, care of Clark Kent or Lois Lane. Most of the letters are drivel, a tawdry blend of selfish wish lists and personal ads. One of the letters, however, does catch Clark's attention. It asks Superman to come to Kingsbury, Indiana to stop the monster that's on the loose.

Upon arriving, Superman discovers that Theo, the boy who sent the letter, is a victim of bullying at his school. The stress of the bullying is building to the point that young Theo has stopped taking his insulin.

Things are far worse than all that, though. Theo is not an average elementary school kid. He is, in fact, the monster that he asked Superman to stop!

Story - 2: I try not to use the vernacular 'meh' to describe things. English is a rich language with an honorable history and a vocabulary that surpasses most other languages in its vastness. So, there are better words than 'meh' to describe one's relative indifference. People could say 'mediocre', 'passable', 'middling', or even 'so-so' and they would be doing communication better service than if they said 'meh'. In this situation, though, I have to bend, because 'meh' as a lackluster word seems a suitable adjective for this equally ho-hum story.

My first problem is all the filler. There's just too much happening and too much superfluous dialogue and panels before we get to the main point. It's all a disservice to the cliffhanger because I saw it coming by the time I finished reading Theo's little letter. A story needs a powerful concluding note to bring readers back for the next installment, and seeing that we were more than halfway through the issue before Superman even learns about the conflict, a simple monster-attack-cliffhanger wasn't going to cut it. It had to be big, and it had to be the boy. Obvious. I wonder if this is an older way of story-telling? No, it's just filler to pad a story that's too short to comprise a full issue. If part two is just as stuffed with nonsense, I'll be crying serious foul for having paid for a story over two issues that could have easily fit into one.

There are plenty of opportunities to make the rest of this issue count. It could have been about bullying, which I'm guessing/hoping it will turn out to be, but it's not. The plot could have had more to do with Brainiac, seeing as nearly a third of the panels involve him (digital version). But it's not. I know what this issue is supposed to be about, but I got lost on the way there.

The filler aside, there are a couple things that irked me. First, and this is minor, is Lois saying 'horndog'. I'm not a prude but 'horndog' just took me out of the story. It's a word I haven't heard in ages, and probably not one that I've ever heard too often. It felt forced and put in to garner cheap humor. Second, and this is what made me shake my head, was Superman using his heat vision to burn the pipe out of the bully's hand. And then he just lets the little goons go! Yeah, they're bullies and they deserve some comeuppance, but they're elementary school kids. Supes burning one of them is excessive and has lawsuit written all over it.

This was one of the lazier installments in Adventures of Superman and I can't say that I've been properly set up to care about what happens next in this story.

Art - 4: To quote Lloyd Christmas, "I like it a lot." It's different, and I enjoy seeing Superman approached in new ways. I'm not a fan of being a fan who can't be a fan of different things. Like Jeff Lemire's art in Adventures of Superman #2, this is a style not seen and it's refreshing. What's more, I don't quite care for exceptionally realistic comic book art. I'm not really a fan of artists like Alex Ross or Lee Bermejo. I much more prefer the art of Dave McKean or Amy Reeder Hadley. Honestly, I'd take Tim Sale over Alex Ross any day.

One thing did cause me pause about the art. Superman has a mole on his face. That's all part of the "new n' different" I just preached was always worth giving a shot, but a mole on Superman's face is a distinguishing mark. It helps give away his identity. Sure, yeah, I suspend my disbelief for a misdirect that's little more than a pair of eye glasses, but a mole is a little too much. It's like giving Bruce Wayne a big, red birthmark on his chin, or Hal Jordan a cross-shaped scar across his forehead. I'm genuinely curious why Cheeks chose to give Superman a mole.