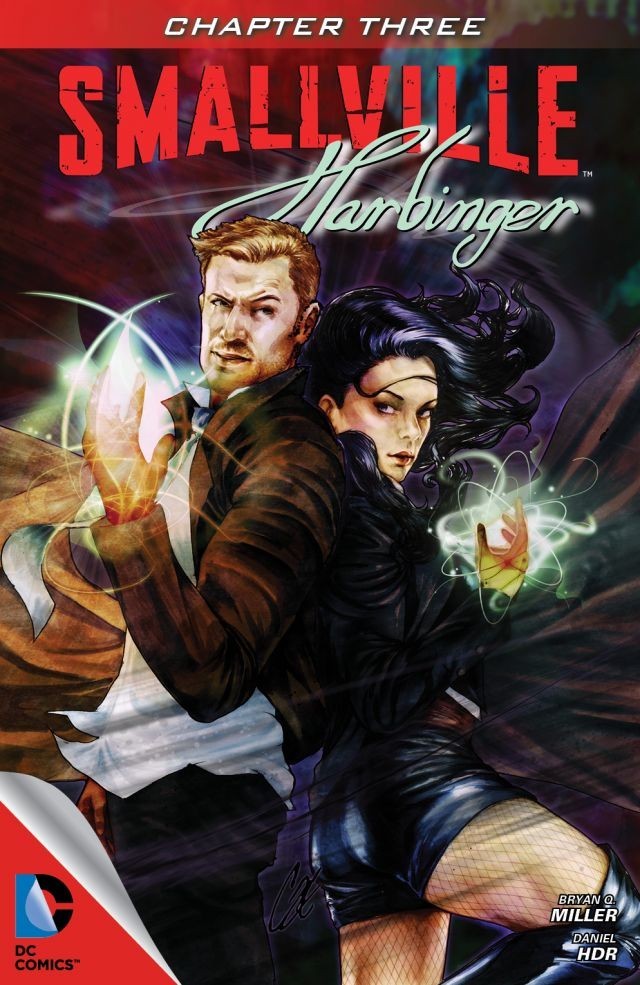 Click to enlarge
Thanks to various spells and links with the afterlife, Zatanna and John Constantine are closing in on Trigon's cult, who is preparing a final sacrifice at Stonehenge to bring the demon to earth. Our heroes arrive moments before the cult appears ready to kill a young girl.

Just as Brother Blood raises his ceremonial dagger, our heroes descend from the sky thanks to some magic (and science... sort of). Just when it seems the momentum is swinging in the good guys' favor, Brother Blood reveals that he was the true sacrifice all along and stabs himself in the heart.

Demons claw their way out of Brother Blood's body, and Constantine, being Constantine, makes off with the Book of Magic, leaving Zatanna and the girl alone. With no other options, the two run from the attacking demons.

Story - 4: Everything has come to a head. Our heroes are face to face with the main antagonists, Constantine has pulled his usual selfish antics and apparently abandoned his companions (but I think we know that won't last), and all hell has literally broken loose. Just another day in the life of a magical DC superhero.

Although a little predictable at points, this issue has some nice twists. Maybe I shouldn't have been, but I was a little surprised when Brother Blood sacrificed himself. Didn't see that one coming. And the phantoms of people Constantine claimed to have gotten killed was unexpected, but certainly appropriate.

Admittedly, a European cult in Druid-like attire holding a sacrificial ceremony at Stonehenge seems a little hammy - I can practically hear all of Europe groaning - but I'm willing to roll with it. This is still a fun little side story, and I'm eager to see the conclusion.

Art - 4: Okay, am I crazy, or did Zatanna start wearing biker shorts halfway through this story? Seriously, just after arriving at Stonehenge, her bottoms grow an extra four or five inches. Did she suddenly feel a need for modesty and change before the final showdown?

All kidding aside, the artwork still delivers. Brother Blood's look is both fitting and just over-the-top enough to work for Smallville. And the demons are a fun little addition to the Smallville mythos we haven't seen before.

Another solid offering, biker shorts notwithstanding.