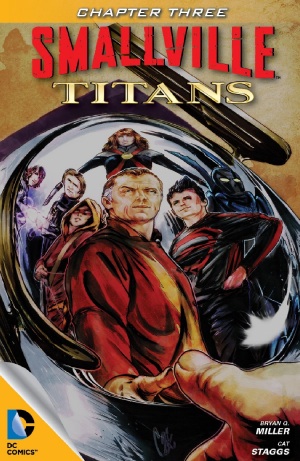 Click to enlarge
Finding a collapsed Jayna, M'gann realizes that something has happened to Zan in order for Jayna to feel this way. Connor hears Rose Wilson, the Ravager, in the Tower explaining to Jamie why she's doing what she's doing. After taunting them enough, Superboy shows up and blasts Rose out of the building with his heat vision.

On the ground, she meets with Speedy, Miss Martian, and The Flash. After quickly taking Jay out with a gravity bomb, Mia attacks Rose until she gets vertigo and can no longer fight. Rose descends upon M'gann with gauntlets of fire and sends her into the ground.

Upstairs, Jayna sees Zan, bleeding out, dying, and tries to get Jaime to transform into the Blue Beetle and fly Zan to a hospital. Unfortunately, there's a bomb attached to Jamie's back that will detonate if he tries to transform. Outside, Connor tells Ravager that he will gladly fight her if she doesn't harm the rest of the Titans. Pulling out a Kryptonite sword, Rose reveals that he's the reason she's there in the first place.

Story - 5: Words cannot express how much I actually love this story.

Maybe I'm allowing the fan in me to take over as opposed to the critic, which sometimes happens of course, but this story has been one wild ride so far and I feel sad to see it coming to an end.

I loved the explanation of why Rose (whose name we actually don't get in the story...) is doing this as her father, Slade Wilson, lies in a coma due to an alien disease that he most likely accumulated from the Phantom Zone. Cool stuff, especially the panels showing Aquaman and Hawkman!

I liked that Superboy blasted her out of the window and I really thought it was cool that Speedy took her head-on, but I feel like maybe Miss Martian could have done more? Actually, I think Blue Beetle could have as well, but it doesn't really matter much to me now, that's not the point of the story.

I wonder if Ravager believes Connor to be the Blur that hurt her father as opposed to Superman; or maybe since she can't take on Superman, and since Supergirl is in the future, Superboy may be an easier shot for her to take down.

Also, it's worth mentioning that this is the first time since Season 5 that we have heard about the Angel of Vengeance from the episode "Vengeance" (well, besides a slight reference earlier in the Season 11 continuity...). I really hope that she's NOT dead because I think that now with a world full of heroes that Andrea Rojas (AoV) would be a great Watchtower agent, especially after the "Vengeance Chronicles" that they filmed during that season.

Also, I hope Star Girl didn't die either... I feel like Superman or CorTessa would be alerted immediately after that, but you never know. For the record, Rose did say that they were fun to take down, but she never actually says "kill"...

Random thought: Jay Garrick needs to fix his leg so he can actually do some damage. We saw him take out Phosphorus in Chapter 1, but now he can't get to Rose from 15 feet away? C'mon.

My final thought on this chapter is this: how are they going to finish this story with only one chapter left? Two I could see, but one? I'm really looking forward to the conclusion of Titans. This arc has been awesome and I cannot wait to see the final resolution of it. Great issue.

Art - 5: The art was exactly what it needed to be this week. No issues whatsoever.