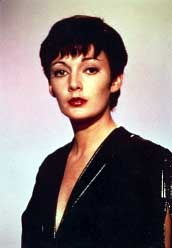 Sarah Douglas (who played Ursa in both "Superman: The Movie" and "Superman II") has taken part in a few interviews in recent weeks, mostly discussing the release of "Superman II: The Richard Donner Cut". Here are a few excerpts from some of them...

Q: Everybody remembers the epic battle between your character and Superman. Did you ever seriously hurt yourself then when filming some of the scenes for the sequel?

A: Yes I had quite a few different injuries culminating in sort of one big one because you just go on working. You get one little injury and there's no time to really recoup from that and so you carry on, and then there's something else and something else. I think the largest count was nine separate injuries to my back and physio on the set, doctors and x-rays - there was always something going on. Also I got my job and I went to work. In the 70s, none of us were that keen about going to the gym. So I was fit because I was in my mid twenties and I was relatively fit. But I didn't, by any means, go to a gym or work out. So my body didn't half take the consequences. But I survived to tell the tale although when I'm out in the garden, my lower back is still an absolute devil and that's old "Superman" problems. But the producers were kind enough to compensate me for the injuries that I incurred - how's that.

Chucking the bus in the film was a good one - I did damage to my shoulder - I ripped it. Nowadays I go and I have a bit of a problem and they say, "well how did you do this" and I have to say "well, throwing a bus across the street." But there you go.

Q: Do you have any other favourite superheroes apart from Superman? A: Oh God! No, because I'm such a Superman fan you see. I've never really got with the any of the others. I've tried - and I've never been a Batman fan or a Spiderman fan. I'm afraid I'm going to be very boring and have to say Superman because I guess Superman is so straight and proper and then he turns into such a fabulous role model for everybody - I'm afraid I'll have to stick with Superman.

"What I liked, really, is that (Marlon) Brando was more involved this time around," she said. "There was a lot more Brando. And it made more sense for the story."

"You can see Chris for what he really was, a very, very talented actor," Douglas said. "There was a lot more of that. You came away just going, 'Wow!' Aside from the fact that he looks fabulous and he was Superman, he always was a very, very good actor."

Fans looking for more commentary from Sarah Douglas about her work on the Superman films should also check out her commentary on the DVD of another of her films, "Conan the Destroyer".