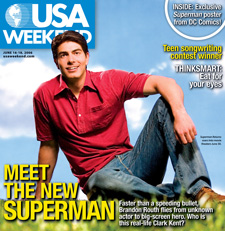 Back on June 12th we reported that USA Weekend magazine, the magazine inserted with the Sunday edition of "USA Today" newspapers, had announced that their June 18th edition will contain various Superman related articles...

The USA Weekend website now has an article up regarding this story. Here's an excerpt from the article...

Origins. Routh was born and raised in the tiny, Smallville-esque town of Norwalk, Iowa, where he acted in community plays, read many books and played various sports -- to go along with a fair share of Nintendo.

Occupations. His teenage employment history includes one summer spent making corn dogs at the Iowa State Fair and the following summer at said fair picking up trash. Years later, Routh worked as a bartender at the trendy Lucky Strike bowling alley in Hollywood, where he won $100 in a Halloween costume contest dressed as Clark Kent. His biggest acting gig until now was a yearlong stint on the TV soap "One Life to Live."

USA Weekend are also offering readers the chance to win one of 20 copies of "Superman Returns: The Videogame". Check out their Sweepstakes page.

Also, Superman Homepage member David "Mike" Parry emailed in with this ad for the "Superman Returns" exclusive pullout poster (by Matt Haley) available within this edition of USA Weekend.