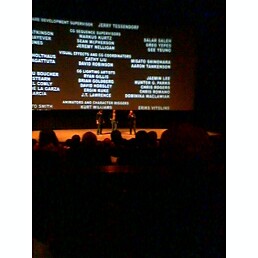 A source close to the production sent in this report about Legendary Pictures holding a friends and family screening on Saturday afternoon on the Warner Studio lot...

Bryan Singer introduced the film, and told everyone to stay for the credits (as if anyone would leave!). When the movie ended, Brandon Routh and Kevin Spacey made an appearance and did a very brief Q&A as the credits rolled silently behind them, and then attended a reception immediately after.

I think there were about 3 questions asked, one was "When do you begin filming the sequel?" (big applause) to which Kevin glibly replied "Oh they want to see if this film might do well at the box office before making such a commitment, and thanks to you all for supporting out little film and this small studio behind it...".

Another question was about how they kept the cape movement so perfect, Brandon said he had no idea how the effects were done, and Kevin, again, brought laughter with his description of how there were little people holding up and rustling the cape, and he essentially said "thank you to all the little people."

The two stars posed for pictures with charity patrons (you had to have a special ticket to get in that line), though it was nice to see it was mostly kids in the line. As Brandon was being escorted off, someone yelled "Hey Brandon" and he actually turned around and came back to where the non-ticketed people were standing. I happened to be right there, so I said "Hi" and asked him to sign my ticket. He was very gracious and seems so unaffected. Kevin Spacey was amongst the last to leave the whole event.

I'm attaching my tiny little cel phone picture from my mid-theater seat - those are the credits rolling and Brandon on the left, Kevin on the right, and a representative from Legendary Pictures between them.