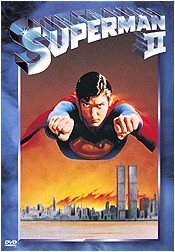 iF Magazine has published part 3 of their 3-part interview with Bryan Singer. In this final installment the director of "Superman Returns" reveals that he's seen 20 minutes of "Superman II: The Donner Cut" and ever donated some props for additional footage being shot for the release...

Q: How much do you know about Richard Donner's cut of SUPERMAN II that is currently being re-assembled?

SINGER: Oh yeah. Not only am I aware of it, but I ran into Dick on the lot recently and he took me into the editing room with Tom Mankiewicz and showed me the first part of it and it was awesome?

Q: So what exactly are they doing? How intensive is this? I thought Donner wasn't involved and now he is?

SINGER: He came in to take a look at it. They had an editor to work on it, and he and Tom came in and were going through it. A lot of it is elements of sequences that were shot and put together. I feel bad we're talking about it, because I'm sure they want to talk about it, but it was such an impressive and fun thing to watch. They took two separate screen tests and cut them together and it's this great scene where Lois Lane puts Clark to the test, because she believes he's Superman and there's a gun involved. That's all I'll say. At first you're watching it and it's very odd to watch these two separate things. It keeps looking differently to your eye. The lighting of the scene and construction of the scene is so good, that by the time the scene pays off you're captivated by it. I watched it in the cutting room. It was a thrill for me. I had just laid the opening credit music for my movie and then suddenly I was in the cutting room in a building across the street watching this with Dick and Tom and it was a thrill?

Q: Are they shooting any additional stuff to link it to SUPERMAN RETURNS?

SINGER: That I don't know. I just watched the first 20 minutes or so. They did want to borrow a prop at one point, but I don't know if that was used.

Q: If they borrowed a prop, then they must have been shooting stuff?

SINGER: They did -- they shot certain things. They shot and reconstructed certain things. It isn't for a massive release I don't believe or anything, but they did shoot additional elements. They really went back to Richard Donner's original intention of the film before he left it.

Read the entire interview at the iF Magazine website.