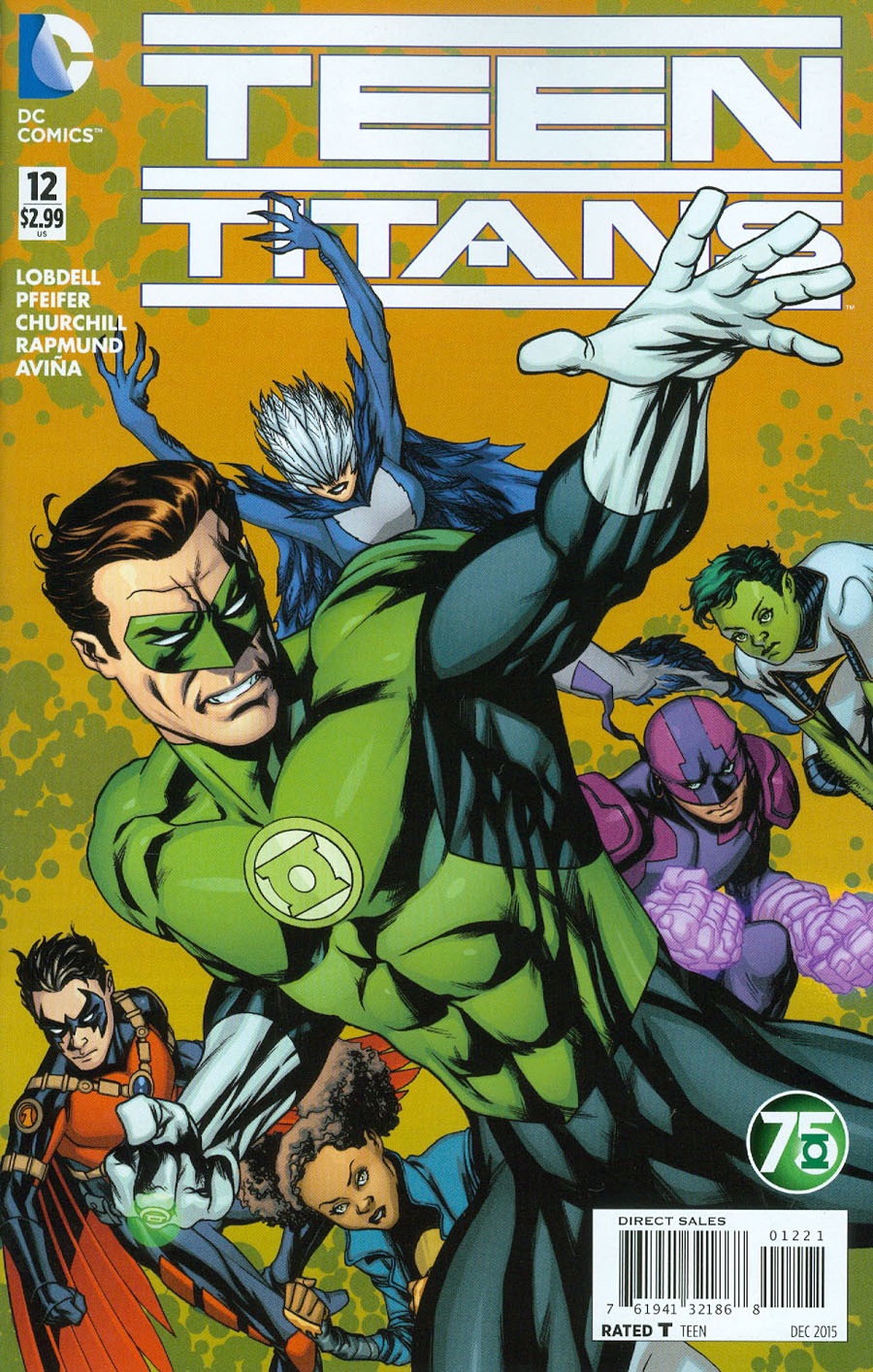 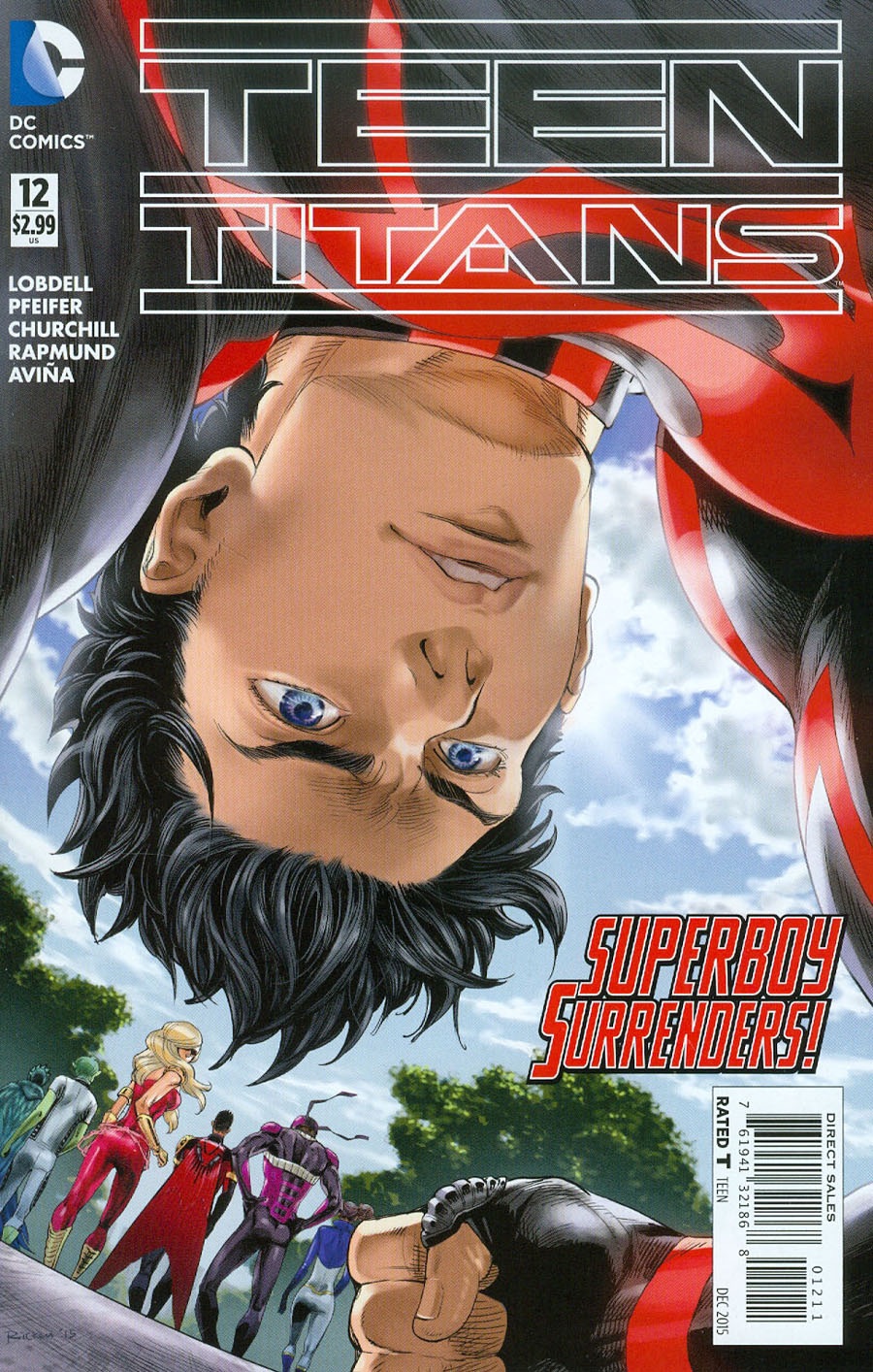 Click to enlarge
We open where last issue left off, watching Superboy touching down at he M.A.W on some sort of holographic vid-screen.

We then see Superboy, Robin, Wonder Girl and Kid Flash get transported to a rubble filled roof top, and appears that whoever transported them, has also taken away the powers of the Titans. Whoever it is, they seem to be studying the make up and physiology of the Titans on their screen.

The team talk amongst themselves, only to find that the environment around them changes as each member of the Titans talks about whatever it is that they are feeling. Superboy tells the team that he now remembers that it was actually him that killed the alien Durlans, because his body read them as a threat, and shut his mind down in the process. That's why he couldn't remember.

Kid Flash then talks about what he feels about how he started a war in the future, because he was doing what he thought was right, and the environment changes yet again.

Wonder Girl has some sort of angry spell and her armor emerges from beneath her skin.

They continue to reminisce, until it is Robins turn and the team learns that Robin/Tim had been keeping an eye on them long before they came together as the Teen Titans.

Robin throws a set of throwing stars at something when he discovers who or what had been responsible for their current whereabouts and causing the environment to change.

It turns out to be Harvest, who convinces Superboy that he is a weapon, and Superboy then in turn, feeling sorry for himself, flies off into a cylinder in the middle of the room and... Dies... I think.

Harvest then turns to the remaining Titans telling them they too will soon be next.

Story - 1: The writing for this issue is handled by two writers. The returning Scott Lobdell and the series mainstay Will Pfeifer... So is Will leaving the book and Scott's coming back to replace him? Remember a time when editorial used to write "editors notes" for this sort of thing?

Didn't DC restart this book because of Scott Lobdell leaving, and Will Pfeifer was taking over?...

It feels like DC editorial decided to softly reboot this book AGAIN, and bring back Lobdell and his run back?!?

For many month's the main villain for this series has been Manchester Black, yet there is no mention of him in this issue, we don't even see the villains from last issue, Despero and Blockbuster, instead we see the return of... Harvest! The villain that the Teen Titans first fought when the New 52 kicked off! What the heck's going on?!? Harvest? Last issue the Titans were all about getting Despero at the M.A.W and now we find ourselves at... I don't even know where! The previous story-line wasn't even resolved, and we are given this story, almost negating a years worth of stories that came before it! Keeping in mind that we waited an extra month for this issue... You'd think a better explanation could be given.

Now I don't want to be that guy, that says, "This is not MY Teen Titans" or "The Teen Titans should be about... And not do what..." But that's how I feel a little bit. This team seems so disjointed, it makes me wonder, why are they even hanging out together? This particular volume of the team started off well, and looked like they were going somewhere, but as of the last few issues, they have begun to flounder. I don't know if that's what Pfiefer was going for, or was there editorial interference.

So it tuns out that Superboy DID kill all the aliens, only to have mentally blocked it from his memory, because his body took over, as it saw them as a threat! So why didn't he kill Chimera, she is a Durlan?

Superboy then gives up and surrenders to Harvest... And flies off into or at... a giant metal cylinder... And what? Is he dead now? The art wasn't too clear, but was that a burning corpse or just rubble? Are they taking Superboy away again? Or is Harvest cooking up a dream sequence? Whatever the case, this issue is over-written and contains too many character touching points and emotional beats, that never took place in the series or the one prior. Also the pacing was terrible!

The only thing I did enjoy, was the fact that when it came down to it, it was Superboy, Robin, Wonder Girl and Kid Flash or rather Kon, Tim, Cassie and Bart that took center stage this issue, because they (though not in the New 52 version) have the history of first being on the Young Justice team. So it's always a treat to see them together.

Art - 3: The art in the book was the only saving grace. Ever since Rocafort left the title, there hasn't been a steady art team. We had Ricken for a couple of issues, and he hadn't quite found his stride, but this month we were lucky enough to get an awesome old Superman and Titans penciller in Ian Churchill.

I have been a fan of Churchill's art since the 90's when I first discovered him on some X-Men related books, and he has always been a bit of a favorite since then. He has in the past worked on both Superman and Supergirl, as well as some Titans related stuff and some fill-ins here in there. So it's always a pleasure to see his art.

Churchill is inked by long time collaborator in Norm Rapmund, but you can see that his art isn't as crisp as it had been in the past, possibly due to the fact that maybe this book was rushed through, hence the two month delay. Usually Churchill puts in more detail than even Jim Lee, but this issue lacked that at times... A minor quibble, to an otherwise beautifully drawn book.

My personal favorites this month, were the 2 double page spreads. Very cinematic. Tony Avina did a good job on the colors also. Very bright and very colorful. Making good use of his color palette.

I really hope that Ian Churchill and Norm Rapmund stay on for a while. I love their art, and they bring a superstar quality to the book... Something it really needs right now!

Cover Art - 4: This cover is very misleading. Ricken has done a fantastic job with the worms eye view from under Superboy on the pavement. The composition is simply superb. However the scene shown on the cover of the Teen Titans walking away from Superboy is nowhere near what happens in this story, that's why I scored it a 4 instead of a 5!

Variant Cover - 3: The Green Lantern 75th anniversary cover is good, but nothing to get excited about, but Mike McKone still does a good job.