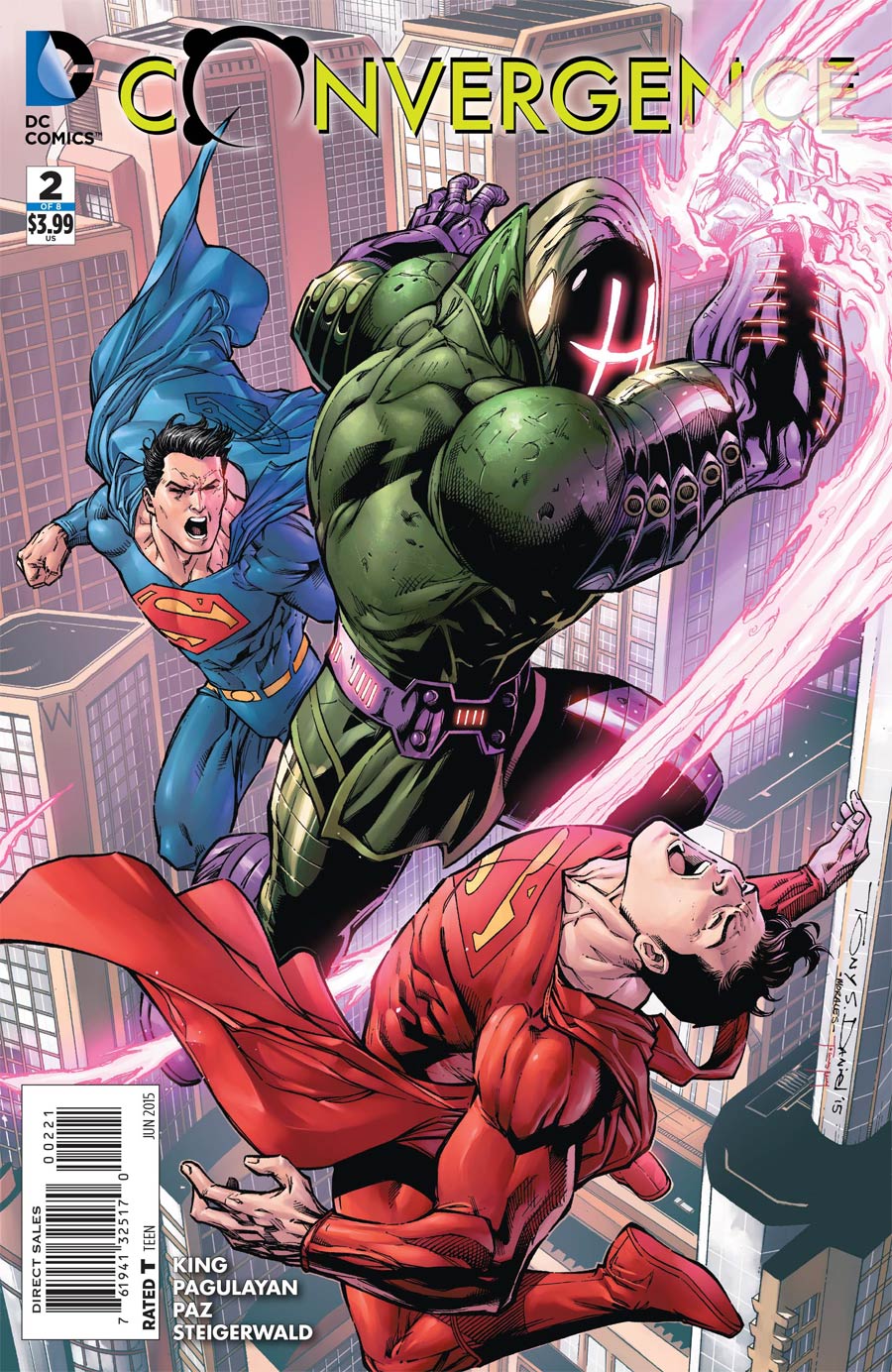 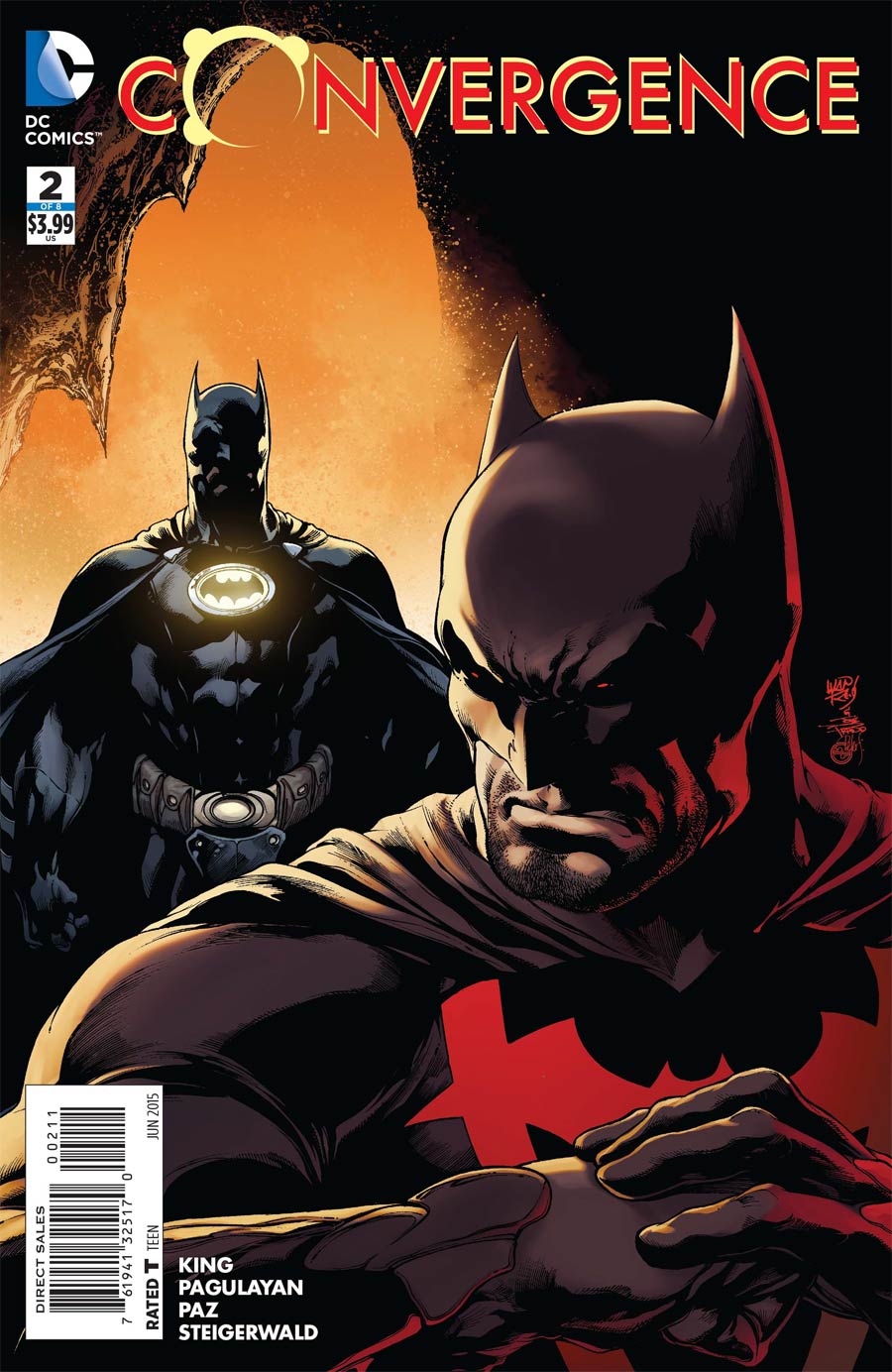 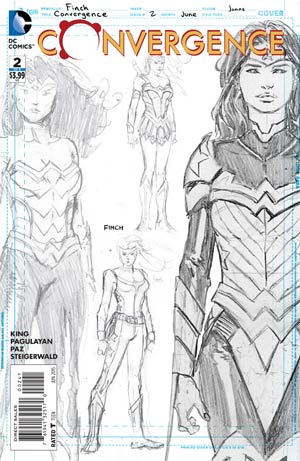 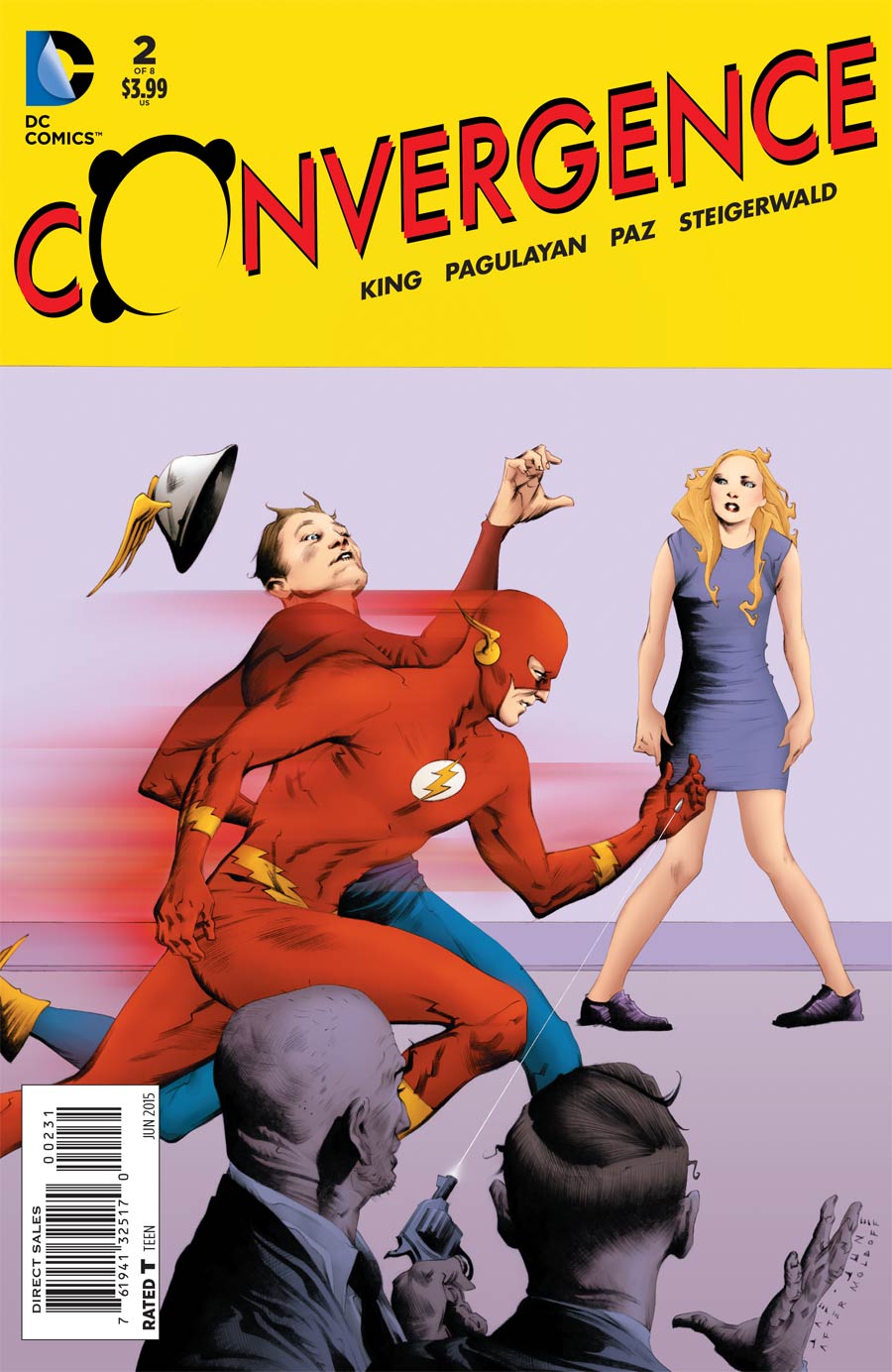 Flashing back to Earth 2, Dick Grayson and his son are among a mass of people waiting to board an escape ship. Apokolips is about to overtake Earth, its inhabitants are doomed.

His wife, Barbara Gordon is dead. But Dick tries to use her law enforcement credentials to skip to the head of the line. He and his son are denied, forced to the back of the line. It is a death sentence.

With no time left, the ships begin pulling into the stratosphere. The fearful crowd becomes a mob. The gates are closing. A mysterious woman appears at the last second and offers to take Dick's son to safety. The boy does not want to board the ship, but Dick insists.

There is an explosion. The ship never makes it out of orbit. As far as he knows, Dick has lost his son.

Liquid metal engulfs Grayson. He wakes up where we left him in issue 1, on the planet Telos. He and the Earth 2 heroes are captured. They and Telos watch as one city destroys another.

With Telos distracted, Superman and the heroes break free. Green Lantern (who's power comes from his connection to the earth) finds a way to tap into a power source from the planet Telos. (the avatar of which they are fighting) Green Lantern uses Telos' own power against him, triggering a violent explosion.

It is a temporary victory. Telos rises again. Superman beats him into submission. Telos dissolves back into the ground, to lick his wounds.

But Green Lantern's meld with Telos has given him a strategic insight. His weakness lies deep within his planetary core. Flash scouts ahead, while Batman and Dick travel to Pre-Flashpoint Gotham city for help.

Batman heads straight for his counterpart's batcave. Dick sees Barbara Gordon, his dead wife's counterpart, as Oracle. Batman (Thomas Wayne) meets his dead son's counterpart, Bruce. They have a conversation that we are not privy to.

Flash runs through a city where Red and Blue Superman are battling Lex Luthor. The heroes encounter a field of executed civilians, murdered by a rival city.

Meanwhile at the batcave, Batman and Dick part with Alfred and their counterpart loved ones. Dick gets a kevlar suit (we don't know what it looks like yet) and Thomas gets the keys to a Batmobile.

The heroes save Deimos, a super villain running from Brainiac's drones. Deimos tells them he can lead them off the planet.

Story - 4: Wow, major improvement. The most important thing, in any story, is to have characters and conflicts that readers care about. Right out of the gate, King does a great job of emotionally grounding the readers to the characters.

Flashing back to Dick and his son attempting to flee Earth is a great move. We learn more about his backstory and how he got to the planet Telos. But more importantly, we sympathize with him. Yes, sympathy means to pity someone, but it also means to understand them, to have a common feeling. When we see the hopelessness of the Apokolips war, and what Dick went through, we share his emotions. We understand him better. This kind of sympathy can be a vital ingredient to any powerful or evocative story. An ingredient which, Convergence has lacked until now.

We also get a momentous Batman scene. Bruce and his father meet for the first time in DC history. It will be interesting to see how that scene plays out later in the series. Though as it stands, the scene was underwritten. We did not get to see any words exchanged between the two, but we can be sure the conversation will be revisited before the miniseries reaches its final conclusion.

In addition to the character work, King finally moves the story forward. The characters have goals and work to achieve them. From little things like escaping the liquid metal, to major developments, like finding Telos' weakness and moving to exploit it.

If I have one criticism, it is the sequence that takes place in the barren, non-citied part of Telos. The "Future's End" battle, liquid metal escape, and Telos fight takes up a third of the book and is by far the least clear, consistent, and interesting.

With no cities engaged in battle yet, Telos says the cities need "some coaxing" and a "helping hand" to fight. But at no point are we shown Telos instigate the fight. We are not shown anything to indicate that Telos has intervened. Furthermore, we are left to guess which cities are fighting. Our only hints are ambiguous statements by given Telos. If this event boils down to naked pandering to the fanbase, (and it does) then own it. Give editor's notes telling us which cities are which, and the name of the trade paperback we can buy, if we like what we see.

As far as consistency, Superman beats up on Telos. He tells Superman that he is just one of many Supermen and therefore, he is not worth his time. If this is true, it is in direct conflict with what New 52 Superman was told by Brainiac. (That Superman's repeated resurrections and victories over his manifestations make him worthy of attention). But if Telos is lying, it makes him a sniveling child, running from a fight he cannot win. Not a good look for a big bad of the series.

But this sequence was also the least entertaining. Not only does it remind me of the bland issues that preceded this one, but the fight came off as a necessity that King had to get out of the way. It accomplishes a few different things, but winds up being anticlimactic and contrived. Telos is defeated twice, both times too easily.

The main repercussion of the fight is Green Lantern's new ability to sense where Telos' weakness is. He can now move the team (and plot) forward. It is a convenient way to progress things. Perhaps I am being too picky after imploring him to advance the story last week, but it did come off a bit forced.

All and all, this is a good story. It should have been the opening salvo in the Convergence event. As I said in previous reviews, the first two issues could have been cut completely without missing a beat. Lets hope this issue is a sign of things to come, and not a blip on the radar.

Art - 3: Maybe the novelty has worn off, or perhaps Pagulayan has not upped his game the way King has, but I am not as impressed with the pencils as I was last week.

There are scenes when the art is required to clearly tell the story, and others where King asks Pagulayan to do the heavy lifting, and convey a wealth of emotion. There are moments in both categories where the artist falls short.

In the opening scene, the escape ship explodes. All we see is the explosion. We never get a good look at the ship. We only know that it was a ship that exploded because of the narration. That's a problem for a story told in a visual medium.

During the Green Lantern/Telos fight, GL expends energy and Telos loses a hand. The art doesn't match up. A panel or two later, he explodes or dissolves, or something. We don't know, because again, we don't really see anything except a lazy, easy to draw explosion. There is nothing in the middle of the explosion, nothing in the panel before or after, to tell a sequential story.

The meeting between Thomas and Bruce was meant to be the most memorable scene, unfortunately it is Pagulayan's biggest failure. To be fair, King gives his artist a tough job. He builds up the meeting between father and son, and then withholds the meat of the scene. No dialog, no real payoff. But a top notch artist should say, "That's ok, I never read the word balloons anyway, ha." Then knock it out of the park, conveying everything that needed to be said by body language and facial expressions alone. Instead, we get neither. The interaction, and the splash page of a cowl-less Bruce Wayne absorbing the reality of his experience, fell flat. The only tension, expectation, or uncertainty that readers loved about this scene came from King, not Pagulayan. It would be interesting to see what the script actually called for, and how the artist interpreted it. But either way, it was a missed opportunity of immense proportions.

Pagulayan may be better than Ethan Van Sciver at propping up a weak script, but here, the artist's inexperience and dearth of storytelling ability shows itself in an inexcusable way.

Cover Art - 3: My problem with the cover, is the false, misleading emotion communicated. The shot conveys a tense, adversarial atmosphere. There seems to be a 'Batman v Batman' tease. But the fascinating aspect about Batman, is his tortured psyche. His inability to let go of the loss he suffered as a boy. Not his supposed ability to defeat any character in combat. The first time in seventy-six years that he finally meets his father is a golden opportunity for an artist to explore how that would (visually) effect Batman as a character. Instead, they go with the boring and predictable hero v hero fight. Not to mention the fact that, they don't actually clash in the book anyway.

No background. Poor color. Bruce's bat symbol is even a tad sloppy.